An Overview of Internet in Schools

As Internet usage across the nation has expanded in recent decades, the state has taken an interest in ensuring that public schools have Internet service. The state’s main reasons for desiring schools to have Internet service relate to improving instructional delivery, transmitting accountability-related data to the state, and, more recently, administering online tests. This article answers many questions the Legislature has raised in recent years about how schools access the Internet. It describes five key aspects of schools’ Internet connections — (1) physical infrastructure, (2) connection speeds, (3) Internet service providers, (4) devices used to display Internet content, and (5) networking equipment. 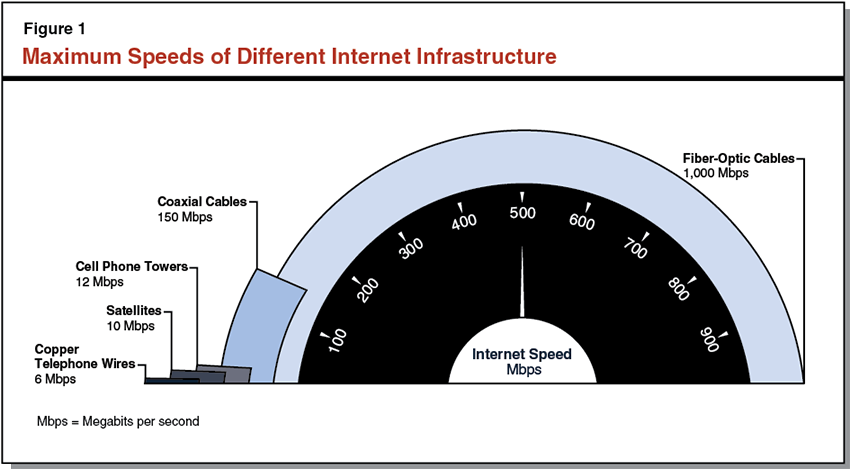 Different Schools Require Different Internet Speeds. The Internet speed requirements at a school depend on (1) how many students and staff typically access the Internet at one time and (2) the complexity of their Internet usage. For example, to administer the new Smarter Balanced Assessment Consortium tests, the consortium estimates that speed requirements will vary greatly depending on the number of students taking the test. As shown in Figure 2, the speed requirements for the tests increase proportionately to the number of students taking the tests, such that a school with 1,000 students requires speeds ten times faster than a school with 100 students. Because speed requirements vary for the test, infrastructure requirements also vary. If a school has greater than 7,500 students, it likely would need fiber-optic Internet infrastructure to administer the tests. Schools with fewer students likely would be able to use either coaxial cable or copper telephone wiring. (This assumes no other Internet usage at the school at the time of test taking.) 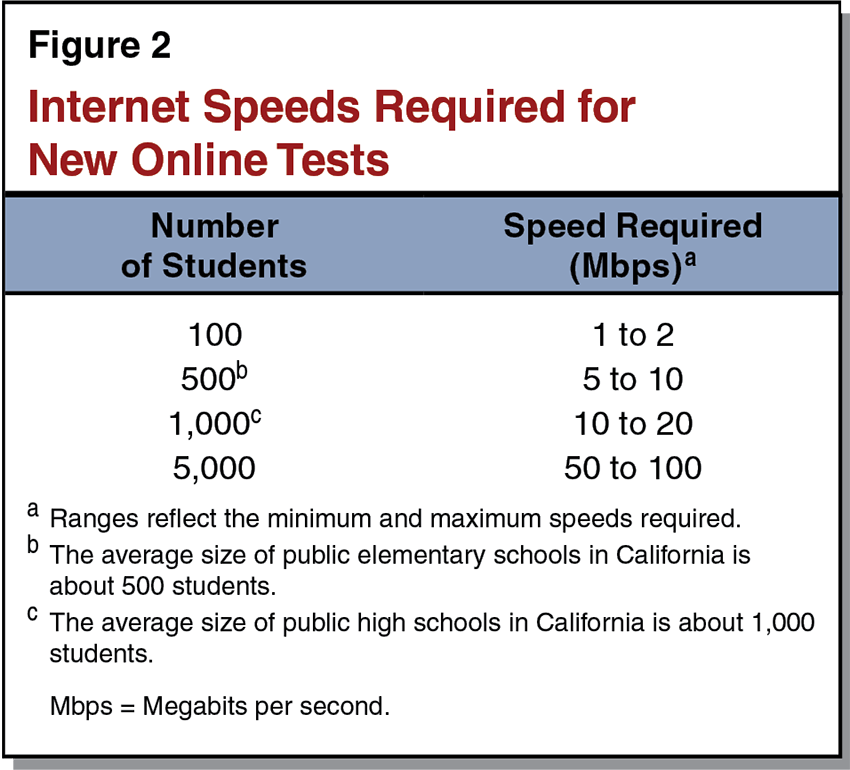 Schools Typically Receive Internet Service Through a Combination of Providers. In most cases, schools using wired Internet infrastructure receive their Internet service from two Internet Service Providers (ISPs). One ISP is the non-profit Corporation for Educational Network Initiatives in California (CENIC), with whom the state contracts for a portion of Internet service on behalf of schools statewide. The other ISP typically is a commercial company (such as AT&T or Comcast) responsible for providing the remainder of the service. Figure 3 shows the multi-stage process for how schools connect to the Internet using ISPs. This process also is described in more detail below. (Because schools using wireless infrastructure, such as satellites or cell phone towers, connect to the Internet in a single stage, they purchase Internet service from a single ISP.) 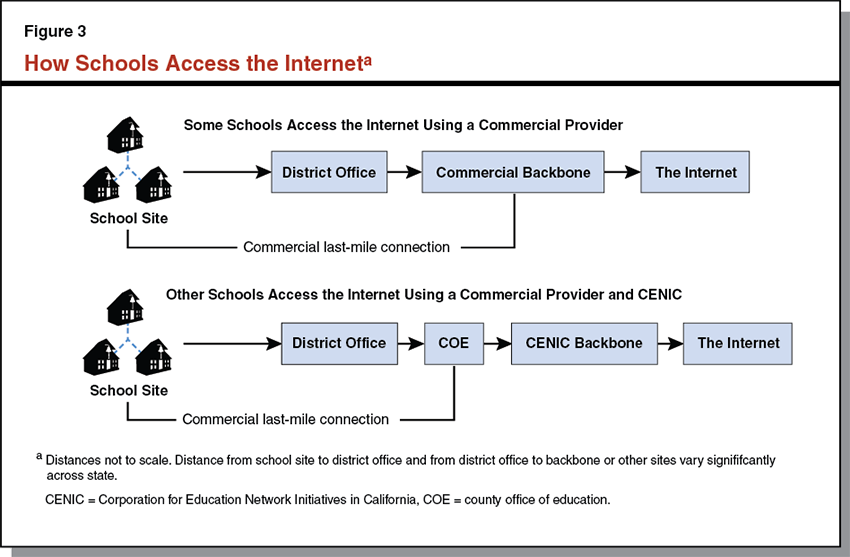 School-Site Connections Provided by Commercial Providers. At a school site, commercial providers’ infrastructure connects different buildings and classrooms together. For example, a large school site using DSL might have a copper telephone line owned by AT&T running from outside the school site to a central distribution point on the school premises. From the central distribution point, AT&T’s copper telephone wires would run to each building and, within each building, copper wiring would run to each classroom.

Last-Mile Connections Provided by Commercial Providers. Commercial companies also typically provide the infrastructure leaving the school site—known as a “last-mile connection.” This infrastructure carries Internet data between the school site and a high-speed Internet backbone (discussed below) and typically passes through the school’s district office. For example, a school might pay AT&T for last-mile service that uses its copper telephone lines. The Internet speed of a computer at the school is determined by the speed of this last-mile connection.

The Internet Consists of Interconnected High-Speed Backbones. The Internet is not owned by a single entity. Rather, it is a physical “network of networks” owned by multiple entities (typically private companies). These networks have agreements to allow Internet traffic to flow among them.

Schools Must Have Certain Devices to Access Internet Content. Schools purchase various devices that display Internet content and allow them to send and receive information. Figure 4 describes the most common devices. 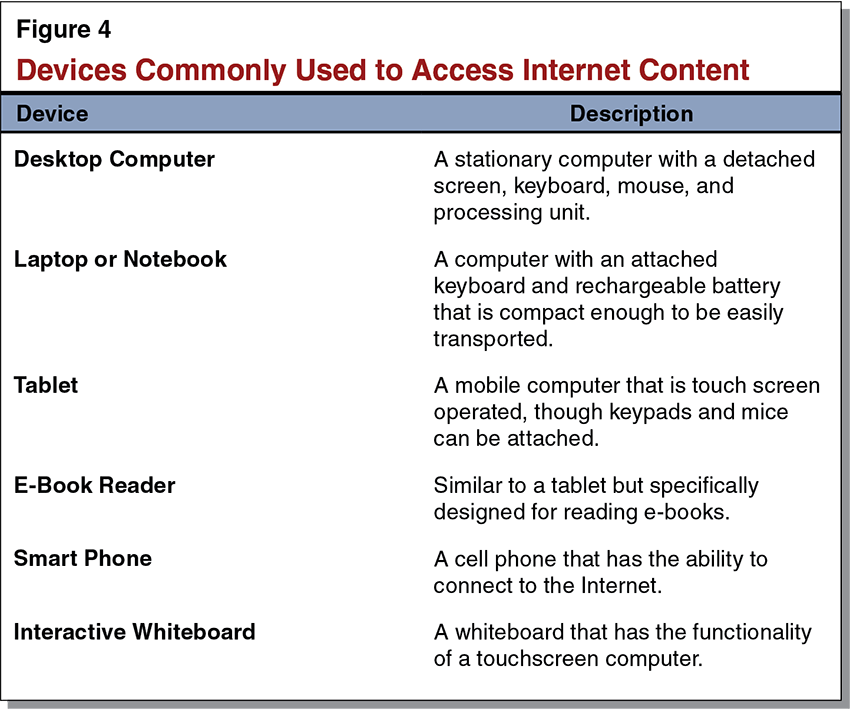 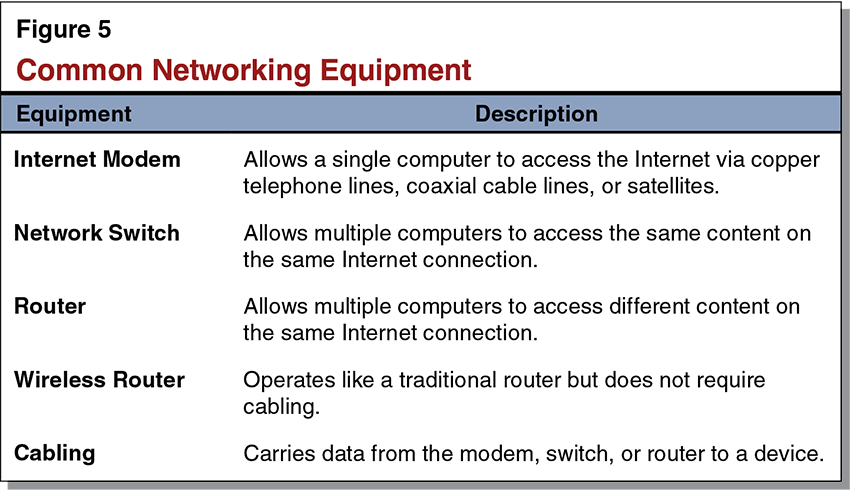