Allocation of Proposition 56 Revenues. The state deposits Proposition 56 revenues into a special fund. As described in our 2017 report, The 2017-18 Budget: An Overview of the Governor’s Proposition 56 Proposals, the measure directs the state to allocate the revenue in four steps:

CDTFA’s Backfill Calculation. To carry out the first step described above (revenue backfills), CDTFA uses a model to estimate what tobacco consumption would have been without the Proposition 56 taxes. (The model is based on statistical relationships between tobacco consumption and other factors, including tax rates.) For 2017‑18, for example, CDTFA compared two numbers: (1) actual tobacco consumption in 2017‑18, and (2) the level of purchases that would have occurred under a tax rate of $0.87 per pack, as predicted by the model. As illustrated in Figure 1 below, the difference between these two numbers is the estimated effect of the Proposition 56 tax increases in 2017‑18. Note that the estimate is a comparison between two numbers in the same year—not a change from one year to the next. 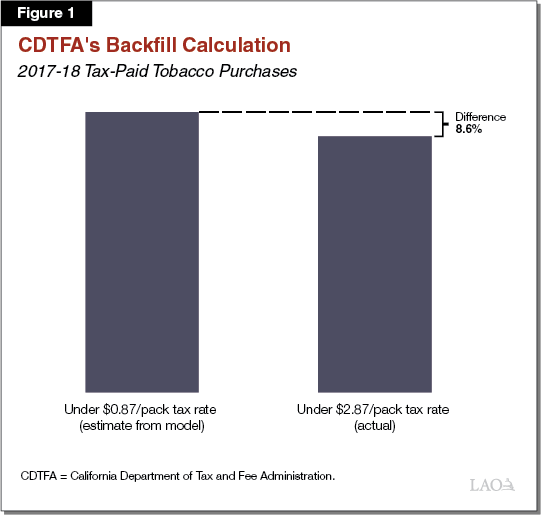 Reduce 2019‑20 Fixed Allocations Based on Backfill Calculation. For 2019‑20, the Governor proposes 8.6 percent year-over-year reductions in the fixed allocations for physician training, dental disease, and tobacco enforcement. This number comes from CDTFA’s 2017‑18 backfill calculation, which estimated that tobacco consumption in 2017‑18 was 8.6 percent lower than it would have been under a tax rate of $0.87 per pack. The resulting dollar amounts appear in Figure 2 below.

No Multiyear Proposal. The administration has not yet decided how adjustments to the fixed allocations will be determined in 2020‑21 and beyond.

2019‑20 Proposal Is Reasonable. The Governor’s overall Proposition 56 revenue projections are reasonable. The measure directs the administration to reduce the fixed allocations of Proposition 56 revenue, but it does not provide precise instructions for calculating these reductions. In our view, the administration’s 2019‑20 reductions reflect a reasonable interpretation of the statute.

Reductions in Percentage Allocations Much Smaller Than Reductions in Fixed Allocations. Year-over-year declines in the percentage allocations generally track year-over-year declines in overall Proposition 56 revenue, which tend to be much smaller than 8.6 percent. For example, the Governor’s Budget projects that the percentage allocation to Medi-Cal will decline by 1.7 percent in 2019‑20.

Future Allocations Unknown . . . At this time, we do not know how the administration will determine reductions to the fixed allocations in 2020‑21 and beyond. However, some future choices would be more logically consistent with the administration’s current approach than others.

Year-Over-Year Method: an Example. The left-hand side of Figure 3 below illustrates the allocation for graduate medical education under the year-over-year method. Suppose—hypothetically—that CDTFA’s 2018‑19 backfill calculation produces an estimate of 15 percent. Under the year-over-year method, the administration would calculate the 2020‑21 allocation by starting with the prior year’s allocation—in this case, the $36.5 million allocated in 2019‑20—and then reducing it by 15 percent. The resulting 2020‑21 allocation would be $31 million. 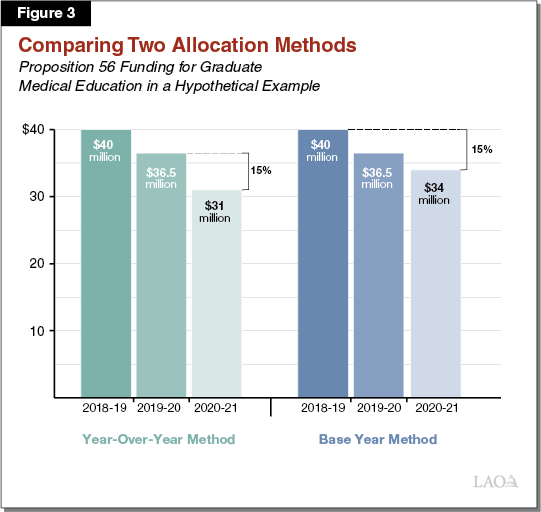 A Better Approach: the “Base Year Method.” Instead of treating the backfill estimate as a year-over-year change, the administration instead could apply it to the same fixed dollar amount each year. In particular, this amount could be the original funding amount authorized by Proposition 56 and allocated in 2018‑19. In effect, this approach would maintain 2018‑19 as a base year going forward, so we refer to it as the base year method.

Base Year Method: an Example. The right-hand side of Figure 3 illustrates the allocation for graduate medical education under the base year method. Suppose—hypothetically—that CDTFA’s 2018‑19 backfill calculation produces an estimate of 15 percent. Under the base year method, the administration would calculate the 2020‑21 allocation by starting with the original funding amount authorized by Proposition 56—in this case, $40 million—and then reducing it by 15 percent. The resulting 2020‑21 allocation would be $34 million.

Other Issues to Consider