Hastings College of the Law

In this brief, we provide background on the Hastings College of the Law (Hastings), then describe the Governor’s proposed budget for the law school and the school’s proposed spending plan. Next, we provide our assessment of Hastings’ budget and offer associated recommendations.

Hastings Is a Law School Affiliated With the University of California (UC). The law school’s primary mission is to instruct students pursuing a juris doctor degree. In 2018‑19, the school is enrolling 944 full‑time equivalent (FTE) juris doctor students, of which 823 are California residents. (Most out‑of‑state students are able to gain residency after one year of attendance.) The school also offers a Master of Law and a Master of Studies in Law, enrolling a total of 22 FTE students in these programs. Hastings is affiliated with UC and participates in many of the university system’s compensation and administrative programs. Hastings, however, has its own governing board and the state budgets for it separately from UC.

Hastings Is Receiving $58 Million in Ongoing Core Funding in 2018‑19. As Figure 1 shows, Hastings relies heavily on student tuition and fee revenue to support its operations. In 2018‑19, $43 million (74 percent) of its ongoing funding came from student tuition and fees, $14 million (24 percent) came from state General Fund, and $1.6 million (2.7 percent) came from various other sources (including the state lottery and investment income). 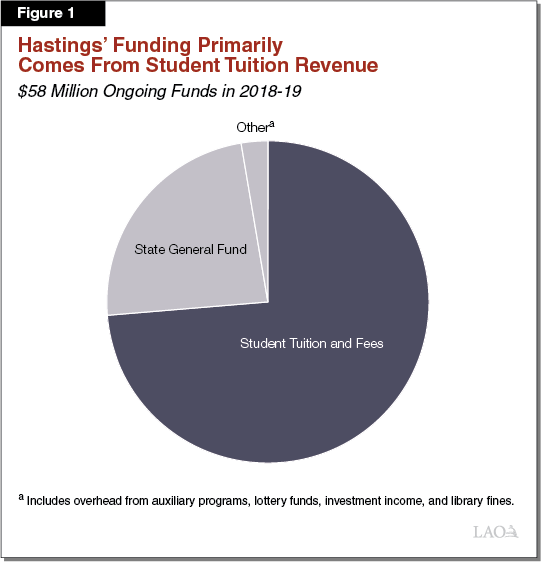 Similar to Other Law Schools, Hastings Enrollment Is Notably Below Peak. In 2018‑19, Hastings has about 370 fewer FTE students than in 2009‑10, when the school’s enrollment peaked (Figure 2). The drop in enrollment the past several years is linked to a national decline in student demand to attend law school. The school plans to decrease its enrollment slightly (to a total of around 950 students) beginning in 2021‑22. 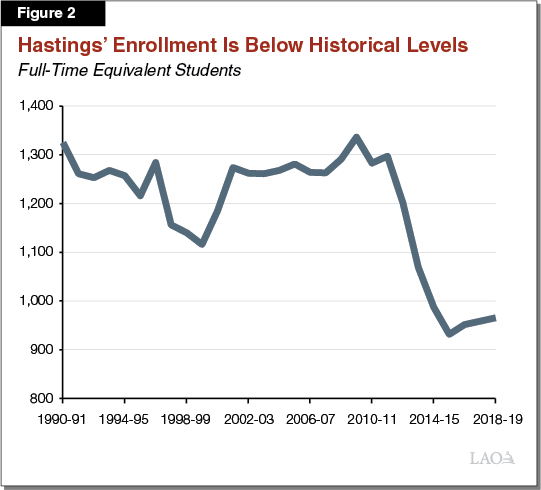 Recent Increase in Tuition Discounting Has Resulted in Budget Deficit. Similar to other law schools across the nation, Hastings discounts all or a portion of tuition for many students. These tuition discounts are allocated to students primarily based on merit rather than household income or financial need. Students generally receive the discount throughout their three years of attendance. In 2015‑16, Hastings began relying more on tuition discounts to attract higher quality applicants. The average discount rate for the fall 2015 cohort was 42 percent, compared to 25 percent for the previous cohort. For the next two cohorts (fall 2016 and fall 2017), the average discount rate remained above 40 percent. The school has not had sufficient annual revenue to support the higher tuition discounting, resulting in the school running annual budget deficits. In 2017‑18, the school ran a $3.9 million budget deficit, equating to 6.3 percent of its total spending on operations and financial aid. Hastings has been using a portion of its reserves to cover these deficits.

Hastings Has Two Core Budget Reserves. First, it has a general, unrestricted reserve for operations. Second, the school has a reserve to cover the costs of future building maintenance and upgrades. While designated for maintenance projects, Hastings indicates that it views this reserve as available to cover budget deficits once the operating reserve is depleted. In addition to these two core reserves, Hastings indicates its housing and other auxiliary programs have reserves that the school could use to cover a budget deficit in the case of a fiscal emergency.

Hastings’ Has a Multiyear Plan for Eliminating Its Budget Deficit. In 2017‑18, Hastings submitted its first multiyear plan to eliminate its budget deficit. At the time, Hastings anticipated eliminating its deficit by 2020‑21. Its plan entailed reducing tuition discounting beginning in 2018‑19 and increasing tuition charges in 2019‑20. In 2018‑19, the school revised its deficit‑reduction plan. While it reduced tuition discounting that year (to 37 percent), it extended the period for eliminating its deficit by one year (through 2021‑22).

Dollars in Millions Except Per‑Student Amounts

Hastings Plans To Reduce Ongoing Spending. Although overall ongoing funding is increasing, Hastings is continuing its plan to reduce overall spending to address its budget deficit. Hastings plans to reduce the tuition discount rate for the fall 2019 cohort to 30 percent. This action would reduce the cost of tuition discounts by a total of $2 million. Hastings plans to use some of these savings to increase certain other operational costs—most notably, employee salaries (3 percent), operating expenses and equipment (1.5 percent), and employee benefits (0.5 percent). After accounting for all of these adjustments, ongoing spending in 2019‑20 would decline by $1.2 million (1.8 percent).

Provides $1 Million One‑Time General Fund for Deferred Maintenance. The Governor also proposes to fund some deferred maintenance projects in 2019‑20. As Figure 4 shows, Hastings has identified a maintenance backlog totaling $1.5 million at Kane Hall, one of Hastings’ two academic facilities. Staff at the school indicate they are in the midst of identifying which projects on this list to support with the proposed $1 million.

Hastings Continues to Reduce Its Deficit but Has Extended the Timeframe for Eliminating It. Hastings estimates its deficit would decline from $6.4 million in 2018‑19 to $5.3 million in 2019‑20. Though the planned operating deficit is smaller, the schools anticipates fully spending down its operating reserve and beginning to draw down its maintenance reserve in 2019‑20. Hastings also has revised its deficit‑reduction plan, extending the timeframe for eliminating its deficit by another year (until 2022‑23). The revised deficit‑reduction plan assumes Hastings begins increasing tuition by 5 percent annually beginning in 2020‑21. Under the plan, the school’s maintenance reserve would have $3.9 million in 2022‑23 (about one‑third less than the amount in that reserve today).

Deficit Raises Questions About Proposed Compensation Increases. State agencies commonly provide compensation increases. Most agencies, however, have not been dealing with a notable budget imbalance. Given the continued deficit of the school, the extended timeline for eliminating it, the expected complete drawing down of its operating reserve in 2019‑20, and the likelihood the school will begin using its maintenance reserve for operating costs, the state may wish not to support Hastings’ proposed compensation and equipment increases this year.

Hastings’ Identified Maintenance Projects Seem Less Critical Than Other Higher Education Projects. Whereas each of the state’s three main higher education segments—UC, the California State University, and the California Community Colleges—have maintenance backlogs totaling billions of dollars, Hastings has significantly fewer outstanding maintenance projects. Hastings consists of only two academic facilities—Snodgrass Hall and Kane Hall. The state has substantially addressed maintenance issues at these two facilities over the past several years. Specifically, Hastings is currently undergoing a state‑funded project to replace Snodgrass Hall with a new building, with construction of the new building scheduled to be completed by 2020. The state has addressed much of Kane Hall’s maintenance issues with previous one‑time General Fund appropriations. As a result of these projects, the school indicates that its identified $1.5 million in projects represents Hastings’ final facility maintenance needs.

Signal to Hastings Budget Expectations. We encourage the Legislature to signal its expectations to Hastings regarding 2019‑20 compensation increases, equipment purchases, tuition discounting, and tuition charges. In considering these issues, we encourage the Legislature to keep Hastings’ operating deficit in mind and ensure that a plan is in place to eliminate this deficit soon. A future economic downturn would make addressing Hastings’ operating deficit even more difficult, with potentially more adverse implications for its students (likely steeper tuition increases) and staff (likely layoffs or salary rollbacks). Given Hastings plans to end 2019‑20 with no operating reserve, such adverse effects become stronger possibilities.