California Has a Large Population of Immigrants With Various Immigration Statuses. According to the Migration Policy Institute, a nonpartisan organization based in Washington, D.C., about 11 million (27 percent) of California’s 40 million residents were born outside the United States. Figure 1 shows that about half of California’s immigrant residents are naturalized citizens, while another 20 percent have legal status and are eligible to become naturalized citizens. Just over one-quarter of immigrant residents are undocumented and do not have legal status to reside or work in the country. In addition, about 4 percent of resident immigrants have a special federal immigration status known as Deferred Action for Childhood Arrivals (DACA). DACA is available to certain immigrants who as children were brought into the country without federal authorization. It allows qualifying individuals to receive a renewable two-year exemption from deportation as well as a work permit. 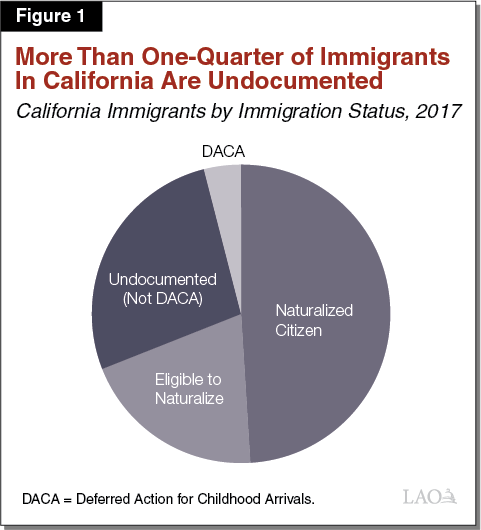 Legislature Funds Legal Services for Immigrant Residents. The state currently provides the Department of Social Services (DSS) with $45 million ongoing General Fund for the Immigration Services Funding (ISF) program. Under the program, DSS contracts with nonprofit organizations (legal service providers) to offer various services in communities throughout the state. Such services include (1) providing education and outreach to immigrants seeking legal immigration status or naturalization, (2) providing assistance with completing immigration forms and applications (such as for DACA renewals and naturalization), and (3) representing undocumented immigrants in deportation proceedings. These services generally are provided free of charge. In 2016‑17, ISF served 163,000 individuals through education and outreach services. A much smaller number of people received one-on-one services such as application assistance and legal counsel. DSS does not collect demographic information on individuals served by the program but indicates that ISF serves immigrants of all ages. Though ISF does not specifically target college students and employees, some likely are served by the program.

2018‑19 Budget Provided One-Time Funds for Legal Services at Public Higher Education Segments. In addition to providing ongoing funding for ISF, the current-year budget provided a total of $21 million in one-time funds for the provision of immigrant legal services for students and staff at CCC, CSU, and UC, as described below.

Provides Ongoing Funds for CCC and CSU Legal Services Beginning in 2019‑20. The Governor’s budget proposes to make legal services funding ongoing for CCC and CSU—providing $10 million ongoing Proposition 98 General Fund for CCC and $7 million ongoing General Fund for CSU. As in the current year, provisional language states that the CCC funds are to be allocated to a district to contract with DSS whereas the CSU funds are to be allocated directly to DSS. In both cases, the funding is for the provision of legal services at the campus level.

Signals Intent to Provide Ongoing Funds for UC Legal Services Beginning in 2022‑23. The Governor’s Budget Summary indicates the administration’s intent to provide $1.3 million in ongoing funds to support UC’s legal services program beginning in 2022‑23 (as the one-time funds provided in 2018‑19 are set to expire at the end of 2021‑22.)

DSS and CCC Still Discussing How Best to Structure Program and Spend Current-Year Funds. For several months, DSS, the CCC Chancellor’s Office, and the Foundation for CCC (a nonprofit auxiliary of the Chancellor’s Office) have been meeting about the best way to structure the new program. Given the large number of colleges in the CCC system, DSS and CCC have been discussing the option of designating specified campuses as regional “hubs” to host workshops and house legal service providers. Services provided at hubs would be open to students and staff at neighboring colleges. Beginning in May 2019, DSS is planning a series of meetings with campuses and nonprofit legal organizations to determine the interest level in serving as a hub. After these meetings, DSS indicates it would award contracts to legal service providers, which would then hire and train attorneys and other staff to work at the designated hub campuses. Given this time line, DSS indicates it is highly unlikely it will spend any of the one-time funds in the current year and thus will have this money available to spend in the budget year.

DSS Is Finalizing Contracts With Legal Services Providers for CSU Campuses . . . For CSU, DSS has already completed the selection process and sent award notification letters to four legal service providers. Collectively, these legal service organizations will provide coverage at virtually all of the CSU campuses. As of this writing, DSS is in the process of finalizing contracts for 2019‑20 and 2020‑21 using the one-time funding provided in the 2018‑19 budget. Figure 2 shows that, thus far, approved budgets for the four providers total $2.5 million for 2019‑20 and $2.2 million for 2020‑21—for a two-year total of $4.7 million. This is $2.3 million less than the $7 million appropriation provided in the current year. The final annual amounts, however, likely will be somewhat higher because DSS is still identifying potential legal service providers for the Monterey Bay and San Luis Obispo campuses. The plan is for each legal service provider to hire a dedicated team of attorneys and support staff and generally visit a campus one to two days per week for consultations, assistance with completing immigration applications and forms (such as for DACA renewals), and other services.

Four Contracts for Legal Services at CSU Are Being Finalized

. . . Though Actual Demand for Services at CSU Will Not Be Known Until Providers Arrive on Campus. A couple of the legal service providers working with CSU indicate they are aiming to start offering workshops and consultations on at least a few campuses beginning in late spring or summer. In most cases, though, services will not begin until the fall (after the providers hire and train their staff). Once they arrive on campus and start meeting with immigrant students and staff, providers say they will have a much better idea of what is the need for services and the nature of the services desired. Depending on what providers learn, DSS indicates it may need to adjust the contract amounts to align with workload demand.

UC Will Begin Spending Current-Year General Fund Appropriation in 2019‑20. UC is supporting its legal services center in 2018‑19 with funding from UCOP. It does not expect to begin spending its current-year General Fund appropriation until 2019‑20. According to UCOP, UC’s legal services center has developed a three-year plan (2019‑20 through 2021‑22) to spend $1.3 million of its state appropriation annually, in line with the Governor’s current budget assumptions. In discussions with our office, however, the university raised two uncertainties that could result in program funding being exhausted faster than anticipated. First, the three-year plan assumes the program matches state funding with funding from other sources. At the time of this analysis, university staff could not identify what these other fund sources would be. Second, the university noted that the program was considering hiring additional staff that would raise its ongoing costs.

Direct DSS to Use Current-Year Funds for CCC Legal Services in 2019‑20. Given that none of CCC’s legal services funding in 2018‑19 has been spent, it remains available for future costs. We recommend the Legislature direct DSS to use these unspent funds to cover 2019‑20 CCC legal services costs. The $10 million proposed in the Governor's 2019‑20 budget thus could be redirected to other Proposition 98 priorities. To assist the Legislature in determining the appropriate amount of immigration funding to provide CCC the following year (2020‑21), we recommend directing DSS to report next spring on the status of identifying campus hubs and awarding contracts to legal service providers.

Direct DSS to Use Current-Year Funds for CSU Legal Services in 2019‑20. Similar to CCC, DSS has sufficient funding from 2018‑19 to cover its contract costs in the budget year. We therefore recommend that unspent funds from 2018‑19 be reallocated to 2019‑20.Were DSS to need more for contracts in the budget year due to high demand, the department has the ability to shift funds intended for 2020‑21 to 2019‑20. Additionally, we recommend the Legislature direct DSS to report next spring on workload demand and any resulting need for new resources.