Governor Proposes $50 Million in One‑Time General Fund for Mental Health Workforce. To ameliorate what the Governor considers to be statewide and regional shortages of mental health professionals, the Governor has proposed a $50 million one‑time General Fund augmentation for existing state programs that provide scholarships and student loan repayment for mental health professionals who agree to work in underserved areas. This brief analyzes the Governor’s proposal.

Mixed Evidence of Statewide Mental Health Workforce Shortages . . . First, we provide basic background on mental health services delivery, funding, and workforce. Following our preliminary review, we find mixed evidence of a statewide shortage for mental health professionals overall. While certain mental health workforce projections show the state is likely to experience a shortage, other evidence we reviewed does not suggest this to be the case. That said, we find stronger evidence that the state could be experiencing a shortage of psychiatrists.

Options for Legislative Consideration. We provide several options for the Legislature to consider as it decides whether to approve the Governor’s proposal. The first option is to take pause and identify the state’s most critical mental health workforce needs and the most cost‑effective strategies for ameliorating them. Exercising this first option would involve delaying funding until many of the outstanding uncertainties related to the state’s mental health workforce strategies are better understood. The second option is to approve the Governor’s proposal, but add parameters to ensure the funding is targeted toward the areas of greatest need. The third option is to provide funding but through approaches that differ from the Governor’s. Examples of alternative approaches include (1) funding programs that more specifically support the education and training of new mental health professionals—such as funding new psychiatry residency slots—or (2) giving counties flexible funding for the delivery of mental health services.

A Variety of Professions Provide Mental Health Services. In an effort to ensure quality care, state laws restrict the delivery of mental health services to licensed providers. Such licensure requirements generally impose minimum education and work‑experience standards for providers to be allowed to practice independent of supervision. State law permits a variety of professions to deliver mental health services and establishes scope of practice rules for which types of services different professions may provide. For example, psychiatrists may prescribe medicine and provide a variety of diagnostic and therapeutic services. Psychologists, by contrast, may not prescribe medicine but may provide a similar array of diagnostic and therapeutic services as psychiatrists. Figure 1 summarizes the professions specializing in the delivery of mental health services.

State Administers a Variety of Mental Health Workforce Programs. Since even before the ACA, state policymakers have had concerns about the capacity of the state’s mental health workforce to meet demand for services. To address these concerns, the state and counties administer a variety of programs aimed at improving the overall supply, geographic distribution, and diversity of the state’s mental health workforce. Often, these existing programs offer (1) scholarships or stipends (as high as $25,000) for prospective mental health professionals still completing their education or (2) student loan repayment (as high as $105,000) for practicing mental health professionals. In general, these existing programs are designed to support the workforce needs of the public community mental health system as well as some types of private providers that largely serve low‑income populations. These existing programs include service obligations where recipients must work at an eligible location for a specified period of time—typically one‑to‑two years—or otherwise repay the scholarship, stipend, or loan repayment assistance. Eligible locations include practice sites located in designated shortage areas as well as certain safety‑net clinics that serve low‑income and other high‑need populations, regardless of whether they are located in designated shortage areas. Other existing state programs are aimed at improving educational and training capacity. These programs, for example, provide funding for residency programs or clinical rotations—a necessary component in the training of at least certain mental health professionals.

Funding Specifically Dedicated to State Mental Health Workforce Programs Largely Expired in 2017‑18. The Mental Health Services Act (MHSA), approved by voters in 2004, places a 1 percent surtax on incomes over $1 million and dedicates the revenue to mental health services. A total of $445 million in MHSA revenues from the act’s initial years was set aside on a limited‑term basis to fund state and county workforce initiatives. Roughly half of this funding was administered at the state level (most recently, by OSHPD), with the other half going directly to counties to administer. The state and counties had through 2017‑18 to spend this $445 million. To continue funding into 2018‑19, the Legislature appropriated $11 million in one‑time MHSA funding for state mental health workforce programs.

OSHPD Is Responsible for Creating Five‑Year Mental Health Workforce Plans. In addition to operating mental health workforce programs, OSHPD is responsible for developing five‑year plans outlining strategies to meet the state’s mental health workforce education and training needs. OSHPD’s most recent five‑year plan was released in early 2019. Historically, the MHSA funding described in the previous paragraph supported the funding priorities outlined in the five‑year plans. Given the expiration of the MHSA funding in 2017‑18, there is no longer funding specifically dedicated to supporting the 2019 five‑year plan.

In this section, we provide our assessment of the magnitude and geographic distribution of potential mental health workforce shortages and the likely impact of the Governor’s proposal in ameliorating these potential shortages.

Recent Growth in Professional Mental Health Graduates Brings Uncertainty to Whether the State Is Facing a Shortage. To see whether the number of people entering mental health professions has in fact remained constant in recent years (which would suggest that the education and training of new mental health professionals is likely not meeting the state’s workforce needs), we reviewed data on the number of individuals graduating with professional masters or doctoral degrees in mental health‑related fields from California universities. As shown in Figure 3, from 2009‑10 to 2016‑17, the annual number of professional degree graduates in the fields of clinical psychology, social work, counseling, and psychiatric nursing increased from 4,700 to around 8,000—a 70 percent increase. (Over this same time period, California’s resident population increased by about 6 percent.) If sustained, this increase in the number of graduates may, but is not guaranteed to, significantly ameliorate the projected mental health workforce shortage that does not necessarily assume an increase. More than 80 percent of the increase in professional mental health graduates is from graduates of private universities in the state, which do not rely on augmentations in state funding to grow enrollment. 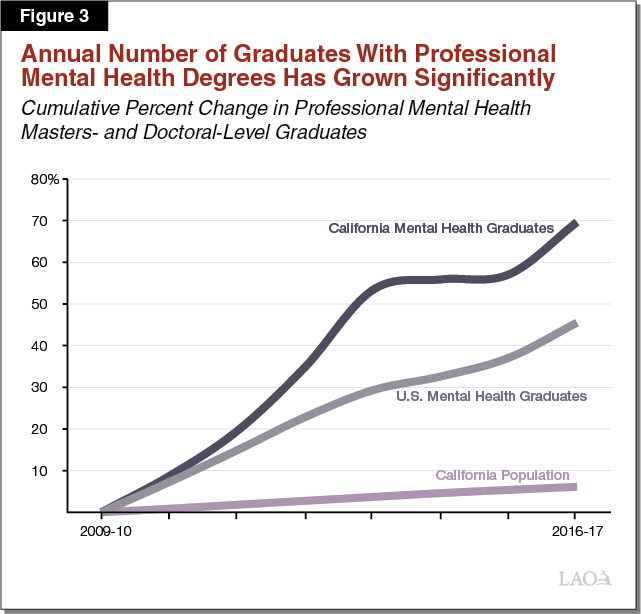 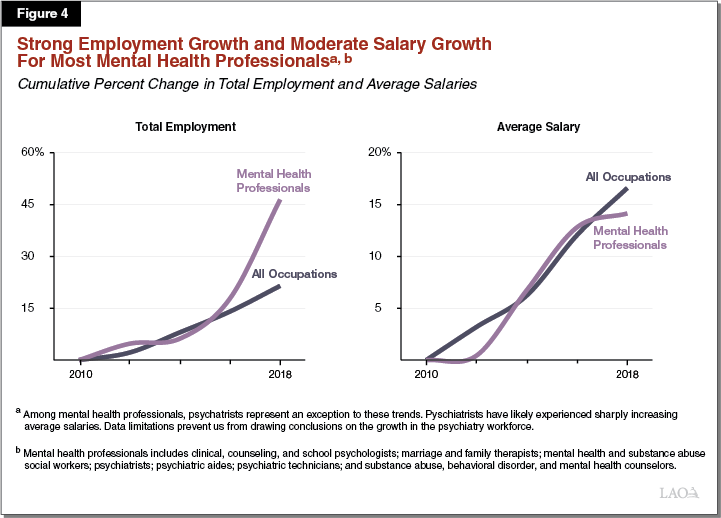 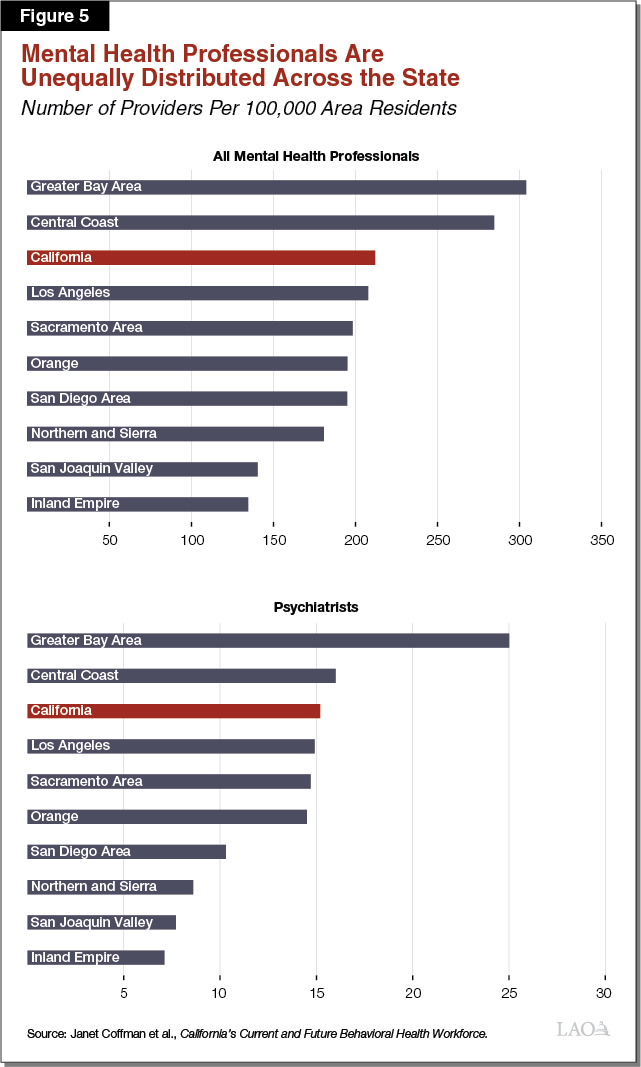 Potential Impact of Funding Under the Governor’s Proposal Is Uncertain

Detail Lacking on How Governor’s Proposed Funding Would Be Allocated. Key details are missing on how the $50 million in one‑time General Fund proposed by the Governor would be allocated among existing mental health workforce programs. For example, the administration has not released a plan for how the funding would be allocated among scholarship and student loan repayment programs. In addition, it remains unclear how much funding would be allocated to the different state programs, each of which supports different sets of mental health professionals. For example, funding the Steven M. Thompson Program would support only psychiatrists while funding for the Mental Health Loan Assumption Program would support a broad range of professionals from clinical social workers to psychiatric nurse practitioners. The administration has shared that while OSHPD is evaluating various potential allocation strategies, it is not certain whether a detailed allocation proposal will be released at the time of the May Revision.

Governor’s Proposal Is Not Linked to a Long‑Term Mental Health Workforce Plan. As previously noted, earlier this year, OSHPD released a five‑year plan outlining the state’s vision and strategies for improving the state’s mental health workforce. Unlike previous plans, the five‑year plan did not specifically come with any attached funding. The $50 million proposed by the Governor, while in many ways consistent with both the current and previous five‑year mental health workforce plans, is not explicitly tied to the long‑term plan. According to the administration, the reason the plan and the funding are not more closely linked largely relates to the plan being released after the Governor’s budget. In addition, in our view, OSHPD’s plan does not contain sufficient detail to be used specifically as a funding plan. For example, the plan does not identify which regions and which mental health professions are experiencing the most acute mental health workforce needs. Rather, it lays out the general vision and goals of the administration as it pertains to mental health workforce.

Options for the Legislature

Take Pause to Identify Workforce Needs and Cost‑Effectiveness of Strategies

Approve Funding, but Establish Parameters for How Funding Is Allocated

Under the Governor’s proposal, the administration would have significant discretion to allocate the funding among existing state OSHPD programs and, in turn, for example, how much financial support different professions would receive. Provided the Legislature wishes to provide funding for existing mental health scholarship and student loan repayment programs administered by OSHPD, the Legislature could consider what parameters it would like to set for the appropriation. The following bullets provide parameters that the Legislature might consider including in budget‑related language: