Catastrophic Wildfires Caused by Utilities Increase Costs for Utility Ratepayers. Recent catastrophic wildfires caused by utilities in California have caused tens of billions of dollars in property damage. Under current legal standards, these damages will directly lead to increased costs for utilities, which could be passed on to ratepayers. Moreover, the recognition of increased potential costs associated with wildfire risks has affected the credit markets, contributing to one investor owned utility (Pacific Gas and Electric) declaring bankruptcy, as well as credit downgrades for other utilities. These credit effects will make it more difficult and expensive for utilities to secure financing for capital investments, which will also increase costs for ratepayers, as well as potentially affect other policy goals. The goal of this report is to be a resource for policymakers and the public seeking to better understand the complicated issues surrounding utilities and the costs associated with wildfire risks.

Recent Government Reports Identify Potential Changes to Allocating Costs. Specifically, we describe and assess four options that were identified by both the Governor’s Strike Force and the Commission on Catastrophic Wildfire Cost and Recovery:

Summary of LAO Assessment. The effects of each option depend heavily on key implementation details. However, for each option, we qualitatively assess how the change could qualitatively affect three key policy criteria.

Wildfire Damages Have Been Growing 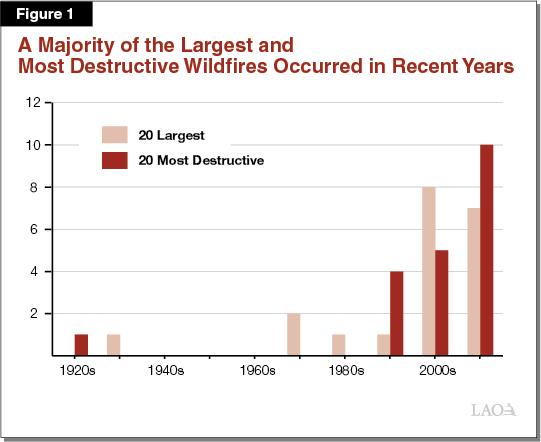 Utilities Start a Small Portion of Fires, but They Are Often the Largest and Most Damaging

California’s current legal structure of inverse condemnation makes utilities liable for all property damage associated with fires started by their equipment. In this report, we focus primarily on the process for paying for these damages through inverse condemnation. This covers a substantial share of the overall damages associated with wildfires. (We note that there are other processes through which a utility might be held liable, including government recovery of fire suppression costs and tort cases brought against the utilities.)

Utilities generally buy commercial insurance to cover costs related to unexpected events such as wildfires. For example, the largest IOUs have policies that cover roughly $1 billion in damages. The costs of the premiums utilities pay for this insurance are passed on to ratepayers. However, if wildfire costs exceed the amount of the insurance—which can be the case for some catastrophic wildfires—the utility must pay for the difference. Some insurers have indicated that they do not plan to offer wildfire insurance for utilities in the coming years. Any uninsured utility wildfire costs can be borne by utility ratepayers and/or shareholders.

Wildfires have a wide variety of adverse effects on many different groups, including households and businesses directly affected by the fires, nearby communities affected by the air pollution caused by the fires, ratepayers that might have to ultimately bear a significant share of the costs associated with these fires, and taxpayers that pay for fire suppression and recovery activities. In this section, we focus on the ways in which the current system for allocating risks and paying for wildfire damages caused by utility equipment can lead to a significant increase in costs for utility ratepayers.

Direct Ratepayer Costs to Pay for Past or Future Wildfire Damages

Given the risks and costs to utility ratepayers identified above, many have called for the state to make further changes to how the state allocates and finances utility wildfire costs. Two recent government reports identified key options for potential changes.

In order to assist the Legislature in weighing the relative trade‑offs of potential changes to the current system (such as those identified by the Governor’s Strike Force and the SB 901 Commission), we identify below some key factors that the Legislature might want to consider when evaluating different options.

There are two aspects of the prudent manager standard that some view as problematic. First, the CPUC has significant discretion on how to apply the prudent manager standard and determine whether utilities can recover wildfire costs from ratepayers for damages that exceed IOU insurance coverage. This discretion creates uncertainty about the degree to which utilities will be able to recover costs from past or future fires from ratepayers. This adds risk for investors (bondholders and shareholders) and, therefore, increases IOU financing costs (bond interest rates and shareholder returns). These costs generally are passed on to ratepayers. Second, some view the CPUC prudent manager standard as difficult for IOUs to meet because they must prove, by a preponderance of the evidence, that they acted prudently in how they managed their operations in order for the CPUC to approve cost recovery.

Shifts Risk From Utility Ratepayers and Shareholders to Insurers and Property Owners.

After a utility is found to cause a fire, the utility can be viewed as a more risky investment, which can increase the costs of raising money to pay wildfire claims and other utility expenses. The costs of raising money (by issuing debt and equity) are generally passed on to ratepayers. In more extreme cases, such as the current PG&E bankruptcy, a wildfire could limit the amount the utility would pay wildfire claims and other expenses.

Liquidity‑Only Fund Would Not Change the Underlying Distribution of Risks . . .

. . . Or the Underlying Incentives for Risk Reduction

Likely Shifts Costs and Future Risks Between Different Groups, but Net Effects Would Depend on Key Details

Could Reduce Incentives to Reduce Future Wildfire Risk, but Depends on Details and Other Actions

Improves Ability to Raise Capital and Likely Reduces Ratepayer Financing Costs, but Effects Depend on Details of Fund

Allocating costs and future risks related to catastrophic wildfires is a complex issue with a wide variety of important considerations. Below, we discuss some other important questions for the Legislature when considering how to allocate utility wildfire costs.

Are There Opportunities to Reduce Other Ratepayer Financing Costs?

What Can Be Done to Better Understand Magnitude of Future Risk and Undertake Actions That Reduce Risk Most Cost‑Effectively?