The 2019-20 budget provides $15.4 billion from the General Fund for judicial and criminal justice programs, including support for program operations and capital outlay projects, as shown in Figure 1. This is an increase of $514 million, or 3.5 percent, above the revised 2018-19 General Fund spending level.

The budget provides a total of $4.1 billion for support of the judicial branch—an increase of $295 million (or 8 percent) from the revised 2018-19 level. This amount includes $2.2 billion from the General Fund and $499 million from the counties, with most of the remaining balance from fine, penalty, and court fee revenues. The General Fund amount is a net increase of $264 million, or 14 percent, from the revised 2018-19 amount. Funding for trial court operations is the single largest component of the judicial branch budget, accounting for around four-fifths of total spending.

In addition, the budget includes a $62.7 million reduction in General Fund support for trial court operations in 2019-20 in order to reflect the availability of property tax revenue in accordance with Control Section 15.45 and Section 2578 of the Education Code. Such funds are remitted to the state by counties that collect more property tax than state law allows them to spend on education. The budget package also increases, as of June 30, 2020, the amount each trial court is able to retain as reserves from 1 percent to 3 percent of its prior-year operating budget.

Capital Outlay. The budget provides $46.4 million for various trial court construction projects. This amount consists of $45 million in lease revenue bond authority for the construction of four previously approved projects, as well as $1.4 million from the Immediate and Critical Needs Account for the design phase for one of these projects.

The budget provides $12.6 billion from the General Fund for support of the California Department of Corrections and Rehabilitation (CDCR). This is a net increase of $213 million, or 2 percent, above the revised 2018-19 level of spending. This increase primarily reflects additional costs related to (1) an expansion of rehabilitation programs, (2) several deferred maintenance projects, and (3) the replacement of vehicles. This additional spending is partially offset by various spending reductions, including reduced spending for contract beds due to a decline in the inmate population. (The net increase in spending does not reflect growth in employee compensation costs in 2019-20 because such costs are accounted for elsewhere in the budget.)

Division of Juvenile Justice (DJJ). Legislation approved as a part of the budget package will remove DJJ from CDCR and make it a separate department under the Health and Human Services Agency beginning July 2020. The budget provides $1.2 million (General Fund) in 2019-20 to support this reorganization. In addition, the budget provides $8 million (General Fund) to implement therapeutic communities (support groups of 10 to 12 youth with structured activities throughout the day) in state juvenile facilities. 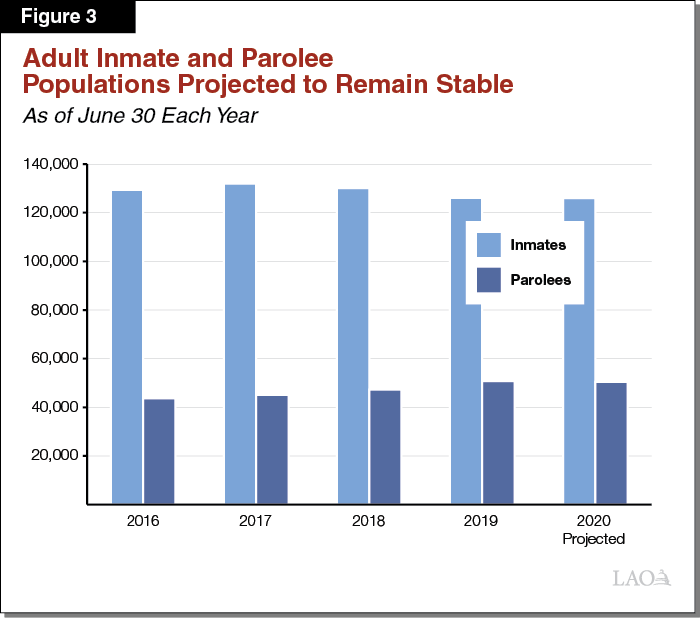 Rehabilitation Programs. The budget provides $71.3 million General Fund (increasing to $164.8 million by 2021-22) to implement a new Integrated Substance Use Disorder Treatment Program. The program has a number of components including (1) providing medication assisted treatment for opioid and alcohol use disorder statewide, (2) additional resources for reentry planning, and (3) an overhaul of existing rehabilitation programs (such as requiring contractors to use a specified list of curricula). The budget also includes an $11.6 million General Fund augmentation for various other rehabilitation programs, including $5.5 million to establish an inmate literacy mentorship program and $5 million to fund grants for nonprofits to provide rehabilitation programs in prisons.

Inmate Health Care. The budget includes various General Fund augmentations related to inmate health care. These include (1) a $61.9 million increase in contract medical spending, (2) $27.9 million for additional staff due to a revision to the method used to establish prison medical staffing levels, (3) $6.1 million for janitorial services at the California Health Care Facility in Stockton, and (4) $6 million to expand telehealth services.

Other Support Budget Adjustments. Other General Fund augmentations to support CDCR operations include (1) $9.8 million to revise the process for handling inmate complaints against staff, (2) $4.7 million to allow the Board of Parole Hearings to accommodate a projected increase in the number of parole hearings, and (3) $4.1 million to implement various pieces of enacted legislation.

Capital Outlay. The budget provides an additional $104 million from the General Fund to support various capital outlay projects in state prisons. Some of the most significant projects are to construct (1) health care space at four prisons ($40.2 million), (2) a new water boiler facility at San Quentin State Prison ($27.3 million), and (3) new cell doors in the administrative segregation facility at the Correctional Training Facility in Soledad ($15.7 million). In addition, the budget provides $49.9 million in increased lease revenue authority to improve prison health care facilities.

The budget provides $757 million for support of DOJ in 2019-20—an increase of $51 million (or 7 percent) for the revised 2018-19 level. This amount includes $333 million from the General Fund—a net increase of $39 million (or 13 percent). (The net increase does not reflect growth in employee compensation costs in 2019-20 because such costs are accounted for elsewhere in the budget.)

The budget package also requires DOJ to submit an evaluation of BFS activities (such as how services are currently provided and what changes would be needed to operate within non-General Fund resources) to the Legislature by January 1, 2020.

Firearms Workload. The budget includes $29.6 million for firearms-related workload. The budget provides a total of $17.5 million from the General Fund to support Armed and Prohibited Persons System (APPS) investigation teams. This amount includes (1) $11.9 million to shift existing support for the teams from three special funds to the General Fund and (2) $5.6 million in increased support for the teams. In addition, the budget shifts $5.3 million in support for the Dealers’ Record of Sale (DROS) Section from the DROS Special Account to the Firearms Safety and Enforcement Special Fund. Finally, the budget provides a $6.9 million augmentation (DROS Special Account) to address increases in existing firearms workload and a $5.2 million augmentation (DROS Special Account) for the implementation of four pieces of firearms-related legislation.

Gambling Workload. The budget includes $4.4 million from the Gambling Control Fund for two years to continue 32 existing positions intended to reduce the backlog of licensing applications from cardrooms and third-party providers. Additionally, the budget package requires DOJ to report on its progress in developing and implementing (1) a formal plan for completing review of backlogged applications and (2) policies to ensure that the department fairly charges applicants for the cost of licensing.

Other Budget Adjustments. The budget includes: (1) $17.2 million one-time General Fund (and $28.8 million over the next two years) for the continued implementation of a tier-based sex offender registry as required by Chapter 541 of 2017 (SB 384, Wiener and Anderson), (2) $12.9 million (generally ongoing)—$3.6 million General Fund and $9.3 million various special funds—to implement about a dozen pieces of newly enacted legislation, and (3) $4.2 million General Fund to establish two human trafficking and sexual predator apprehension teams.

Board of State and Community Corrections (BSCC). The budget provides various General Fund augmentations for grant programs to be administered by BSCC. This includes:

Office of the Inspector General (OIG). The Legislature passed budget trailer legislation to provide the OIG, which is responsible for oversight of CDCR, with the authority to initiate an audit or review of the department. (Previously, such reviews could only be initiated by the Governor or Legislature.) The legislation also requires the OIG to provide oversight of CDCR’s process for reviewing inmate allegations of staff misconduct and other specialty grievances. The budget provides $3.5 million from the General Fund to support these new activities.

Commission on Peace Officer Standards and Training (POST). The budget includes a $34.9 million General Fund augmentation for law enforcement training costs. The funds will be used for POST administration, training, and oversight, as well as local assistance and training-related reimbursements. The budget also requires that $20 million of this amount is to be used to prioritize use of force and de-escalation training in 2019-20 as well as in 2020-21.