Over the past decade, the state has taken various actions that have significantly reduced the number of inmates and parolees under the supervision of the California Department of Corrections and Rehabilitation (CDCR). Most notably, legislation was enacted in 2011 that shifted (or realigned) the responsibility for certain offenders from the state to counties. This was done to help the state comply with a federal court order to reduce prison overcrowding, as well as reduce state costs. Voters have also approved a series of ballot measures that have impacted the inmate population, such as reducing penalties for certain offenders convicted of nonserious and nonviolent property and drug crimes. Since the implementation of the these and other policy changes, the state’s inmate population declined by nearly one‑quarter and the parolee population declined by nearly one‑half. However, over the same period, CDCR spending increased by over $3 billion, or more than one‑third.

Major Reasons for Spending Growth Despite Population Decline. In this brief, we describe the major reasons why CDCR’s costs did not decline in line with the substantial decrease in the populations. Specifically, while CDCR did experience some reduced costs associated with the decline in the populations, they were more than offset by increased costs primarily associated with three factors:

Population Decline Allowed State to Avoid Significantly Higher Costs. We note that had the inmate population not declined over this period, CDCR spending would have increased by significantly more than it actually did. This is because the state would have had to finance the construction of several new prisons or contract for tens of thousands of prison beds. Accordingly, despite the growth in spending on CDCR, the state is likely spending billions of dollars less than it otherwise would be had it not taken actions to reduce the inmate and parolee populations.

In November 2006, plaintiffs in Coleman v. Newsom and Plata v. Newsom filed motions for the federal courts to convene a three‑judge panel pursuant to the U.S. Prison Litigation Reform Act to determine whether (1) prison overcrowding was the primary cause of CDCR’s inability to provide constitutionally adequate inmate health care and (2) a prisoner release order was the only way to remedy these conditions. In August 2009, the three‑judge panel declared that overcrowding was the primary reason that CDCR was unable to provide adequate health care. Specifically, the court ruled that in order for CDCR to provide such care, overcrowding would have to be reduced to no more than 137.5 percent of the design capacity of the prison system. (Design capacity generally refers to the number of beds that CDCR would operate if it housed only one inmate per prison cell.) The court ruling applies to the number of inmates in prisons operated by CDCR and does not preclude the state from holding additional inmates elsewhere, such as conservation camps—which are generally jointly operated by CDCR and the California Department of Forestry and Fire Protection—and other publicly or privately operated facilities.

State Implemented Several Policy Changes to Reduce Prison Overcrowding. In order to reduce prison overcrowding, the state implemented various policy changes that significantly reduced the inmate population in recent years. Some of the major changes include: 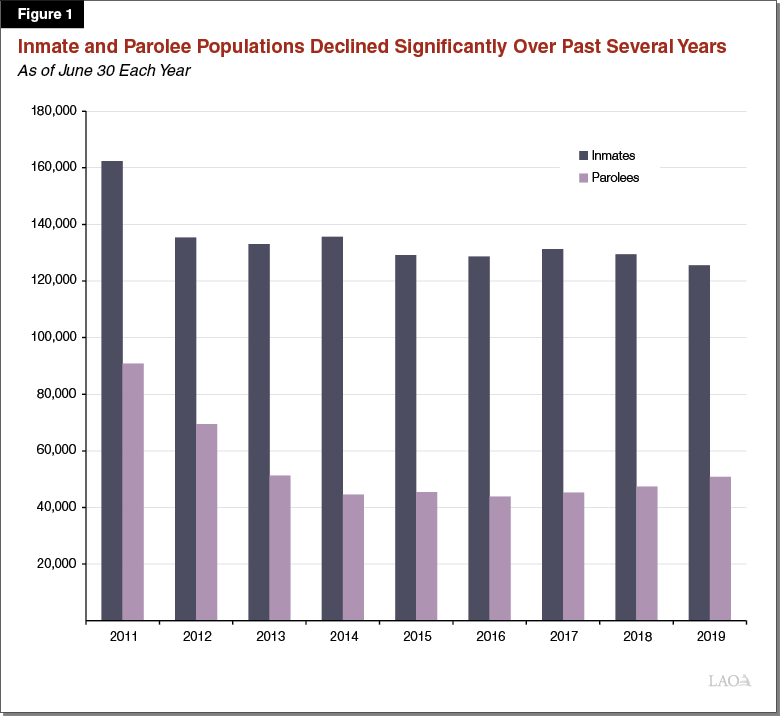 Although the state’s inmate and parolee populations have declined significantly in recent years, the level of spending on CDCR has increased. As shown in Figure 2 , expenditures increased by $3.6 billion (37 percent)—from about $9.7 billion in 2010‑11 to an estimated $13.3 billion in 2019‑20. 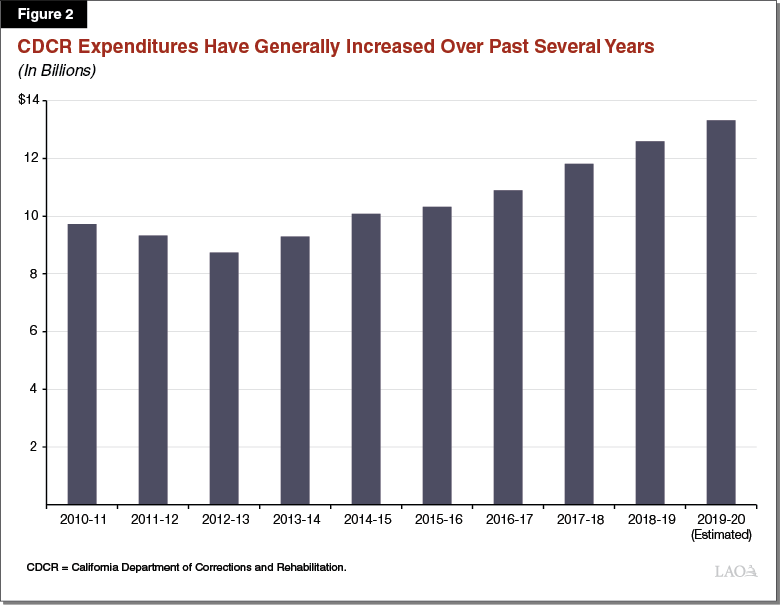 While many factors have contributed to the increase in CDCR spending over the past decade, we have identified three main factors: (1) costly operational changes to comply with various federal court orders, (2) increased employee compensation costs, and (3) the payment of costs that were deferred during the fiscal crisis. Below, we discuss each of these factors in further detail and how some of the increased costs are the result of more than one factor.

Despite Population Decline, State Was Not Able to Reduce Prison Capacity Given Overcrowding Limit. As discussed above, the federal court ruled that prison overcrowding had to be reduced to no more than 137.5 percent of the design capacity of the state’s prison system. As such, although the number of individuals in state prison significantly declined, the state had to maintain its existing number of facilities—but house fewer inmates in them—to help meet the court order. Accordingly, the state did not realize a substantial reduction in staffing or costs because a large amount of prison operational costs are generally only eliminated when an entire prison or section of a prison is closed. We also note that the state continued to house inmates in out‑of‑state contract prisons in order to maintain compliance with the overcrowding limit.

State Also Activated New Capacity to Comply With Overcrowding Limit. In addition to maintaining existing prison capacity, the state also had to take steps to actually expand prison capacity and the number of available inmate beds in order to meet the court’s overcrowding limit. Otherwise, the state would have still exceeded the limit. Specifically, the state:

Improvements to Inmate Health Care Have Been Costly. In order to comply with court orders in the Plata and Coleman cases, the state substantially expanded inmate medical and mental health care services over the past several years. As a result, CDCR spending on inmate health care increased by about $1.4 billion (66 percent)—from about $2.2 billion in 2010‑11 to an estimated $3.6 billion in 2019‑20. Much of this increase is due to increased staffing. For example, the number of health care positions per inmate has nearly doubled—from 0.06 in 2010‑11 to 0.11 in 2018‑19 (the most recent complete data available). We note, however, that the number of non‑health care staff declined over the same time period. As shown in Figure 3, this resulted in overall staffing at CDCR being similar to its pre‑realignment level, but with a greater share being health care staff. 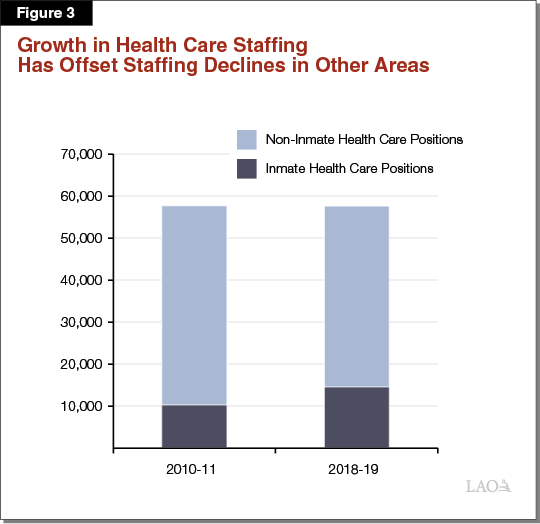 One of the most significant expansions of inmate health care during this period was the activation of CHCF. To operate CHCF, the 2019‑20 budget includes a total of about 4,000 positions, including about 2,600 health care and 900 custody positions. The state spends roughly $480 million annually to operate CHCF. Another significant expansion in inmate health care costs resulted from shifting responsibility for operating inpatient psychiatric programs in prisons from the Department of State Hospitals to CDCR. This change, adopted as part of the 2017‑18 budget package, was intended to improve care primarily by streamlining the process of transferring inmates into the program. The shift resulted in a roughly 1,400 position increase in CDCR health care staffing and a $260 million increase in CDCR spending between 2016‑17 and 2017‑18.

Cost Per CDCR Employee Has Increased

Increased Pension Benefit Costs. One of the primary elements of employee compensation that has increased CDCR costs over the past decade is rising pension contribution rates. For example, the state’s contributions to pensions for CDCR’s correctional staff have grown from 29 percent of pay in 2010‑11 to 49 percent of pay in 2019‑20. Pension contribution rates are established by the California Public Employees’ Retirement System board. The board has increased contribution rates to pay for unfunded pension liabilities that grew during the fiscal crisis through a combination of (1) lower‑than‑assumed market returns and (2) new actuarial assumptions (specifically, the pension system now assumes that future returns will be lower and that retirees will live longer than was previously assumed).

Increased Employee Salaries. Growth in salaries has also been a major contributor to CDCR employee compensation costs. Since 2012‑13, the state’s labor agreements with the various bargaining units that represent CDCR employees have generally provided annual pay increases. For example, correctional staff—which make up half of CDCR employees—received pay increases ranging from 3 percent to 5 percent in all but one of the past seven fiscal years. (We note that many of the pay increases during this time period were established in labor agreements that also increased employee contribution rates to fund retirement benefits.)

Between 2008‑09 and 2012‑13, California faced annual budget shortfalls exceeding several billion dollars. The state took various actions to close these shortfalls, including reducing expenditures and shifting costs to the future. (For more information on this topic, see our report The Great Recession and California’s Recovery.) This made CDCR’s budget artificially low in these years and resulted in greater spending in future years. One significant example of this type of action was the furloughing of correctional officers. Between 2008‑09 and 2012‑13, many state workers—including CDCR correctional officers—were given increased leave time in exchange for reduced pay, known as “furloughs.” While this temporarily reduced CDCRs budget, it significantly increased correctional officer leave balances. This increased future costs in two ways. First, as these employees subsequently take vacation with leave time earned through furloughs, the state must pay other staff—often through overtime—to cover their positions. Second, the state must pay off any remaining leave when these employees separate from state service. Accordingly, some amount of CDCR’s employee compensation spending since furloughs ended in 2012‑13 is tied to these payments. (For more information on this topic, see our report After Furloughs: State Workers’ Leave Balances.)

As mentioned above, the state complied with the federal court’s overcrowding limit by both reducing the inmate population and expanding prison capacity. However, if the inmate population did not decrease and the state complied exclusively by expanding prison capacity, CDCR spending would be significantly higher than it is today. This is because the state would have had to finance the construction of several new prisons or contract for tens of thousands of prison beds. To the extent the state chose to construct additional prison capacity, it would have incurred increased operational costs to staff and operate the new facilities. Similarly, the state would have faced higher costs to increase the quality of health care for a greater number of inmates. In total, these additional costs could have been in the billions of dollars annually. Accordingly, despite the growth in spending on state corrections, the state is likely spending significantly less than it otherwise would be had it not taken actions to reduce the inmate and parolee populations.