State Recently Adopted Computer Science Standards. The state has adopted academic content standards that describe what students are expected to know by the end of each grade in each subject. Chapter 876 of 2014 (AB 1539, Hagman) required the state to consider adopting computer science content standards. The State Board of Education (SBE) ultimately adopted a set of computer science standards in September 2018. As directed by Chapter 693 of 2016 (AB 2329, Bonilla), the SBE subsequently adopted a strategic plan in May 2019 to provide guidance on implementing the computer science standards statewide. 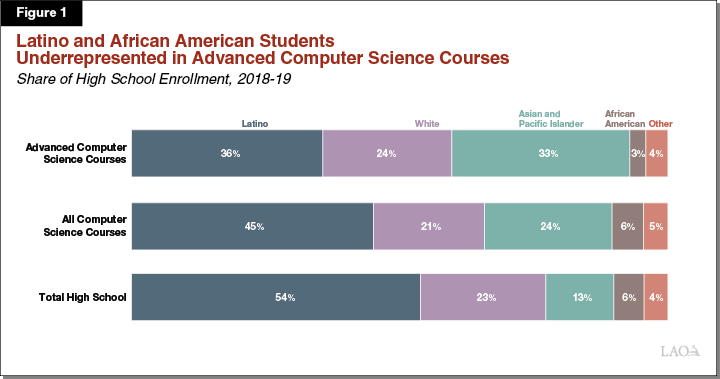 State Funded Computer Science Professional Development in 2019‑20. The 2019‑20 budget provided $5.5 million for statewide computer science professional development as part of the Educator Workforce Investment Grant (EWIG). The professional development is intended to provide teachers with computer science learning experiences that support statewide implementation of the standards. The California Department of Education (CDE) is responsible for awarding one grant to a nonprofit organization or university for this purpose. At the time of this publication, CDE is reviewing applications and expects to award the grant in March 2020. The 2019‑20 budget also provided $1 million one time (to be used over four years) to fund a computer science coordinator at CDE. The coordinator is responsible for the statewide coordination and implementation of the computer science strategic plan.

Student Test Scores Are One Component of State’s Accountability System. In 2013, the state adopted a new school accountability system that assesses school district performance in eight state priority areas. As Figure 2 shows, one indicator is student academic achievement—specifically, student performance in the state’s math and English standardized tests. (The SBE intends to include science in the future after multiple years of test results are available.) The performance indicators tied to these priority areas are displayed on the California School Dashboard website. Performance is measured for each district, school, and numerically significant student subgroup.

Numerous Experts Comprise State’s System of Support. A district that is identified as low performing in two or more state priority areas for at least one student subgroup is to receive targeted support from its county office of education (COE). In providing this support, COEs sometimes consult with other regional and state partners known as resource leads. The resource leads include various COEs designated to provide statewide guidance related to specific priority areas, such as school climate, special education, community engagement, English learners, student equity, and math for younger students.

Provides $20.2 Million One Time for Three Computer Science Initiatives. The Governor’s budget for 2020‑21 includes three augmentations intended to increase the capacity of districts to teach computer science. These include the following:

No Assurance That Proposal Would Result in Greater Access to Computer Science. Under the proposed structure of the incentive grants, the state has no clear assurance that funding would lead to the availability of significantly more computer science courses. Although teachers would receive financial assistance to take the required courses, the proposal does not require that they ultimately obtain the authorization. Moreover, districts are not required to report the number of new computer science courses offered as a result of the proposed funding. The proposal also does not take into consideration whether participant districts already provide substantial access to computer science courses.

Resource Leads Typically Used to Address Broader Education Issues. The state’s existing resource leads focus on broader issues that are critical for districts to improve education outcomes for their students. For example, one resource lead focuses on school climate, one of the state’s eight priority areas. Another resource lead focuses on English learners, a student subgroup that represents one-fifth of the state’s student population and has historically had below-average outcomes on most academic measures. By contrast, computer science is a much narrower issue not specifically tied to the state’s priority areas. In addition, as previously mentioned, computer science is not required for a student to graduate high school or be accepted into a four-year university. Moreover, academic performance in computer science is not measured in the California School Dashboard. For these reasons, we do not think identifying a COE as a resource lead for such a narrow, specific subject area fits well within the existing system of support.

Provide $5 Million for Additional Authorizations, Add Grant Requirements. We recommend the Legislature approve $5 million one time (rather than the $15 million proposed by the Governor) to increase the number of supplementary authorizations—enough to provide grants to 3,300 teachers. Although this amount is only one-third of the funding requested by the administration, it still provides sufficient funding to substantially increase the number of authorizations statewide. This amount is consistent with state funding provided for other teaching authorizations—most notably, for bilingual authorizations funded in 2017‑18. We also recommend requiring participating districts to report on the number of new computer science courses they offer after receiving funding from the incentive grants. To most effectively increase access to computer science, we also recommend the grants be prioritized to rural school districts and districts with high shares of low-income students.

Wait for Additional Information on EWIG Funding Before Taking Action on CSMP Proposal. We recommend the Legislature withhold action on the proposed CSMP augmentation until it has had an opportunity to review the planned activities funded through EWIG. The CSMP’s planned activities could be duplicative of those funded through EWIG. The CDE anticipates awarding the $5.5 million in EWIG funding provided in the 2019‑20 budget by the end of March. After which, the Legislature could have the department report at budget hearings on the planned uses of EWIG funds. If the Legislature were to provide additional funding for the CSMP, we recommend adding provisional language to ensure its activities complement, but do not duplicate, professional development funded through EWIG.