California Competes awards income tax credits to attract or retain businesses considering a significant new investment in California. Chapter 52 of 2018 (SB 855, Committee on Budget and Fiscal Review) made several changes to the program and requires our office to review information submitted to us about the program by the administration and report to the Legislature. Overall, we found that, following changes to the program made in 2018, California Competes appears to be better targeted at awarding credits to businesses more likely to create a net increase in jobs. We also observed that the number of California Competes applications has declined and that the average amount awarded per company has increased.

California Competes Provides Financial Incentives to Attract Business Investment. California Competes is an economic development tax incentive program that allows the administration to negotiate tax credit agreements with individual companies that agree to meet multiyear hiring and investment targets. The objective of the program is to attract or retain business investment that, without the incentive, would occur in another state. We previously evaluated the California Competes program in 2017.

Program Modified and Extended in 2018. California Competes had been set to end in July 2018, but a budget trailer bill—Chapter 52—extended it through the 2022‑23 fiscal year. At that time, California Competes was modified to refocus the program on attracting jobs and investments that would otherwise locate outside of California. In addition, we were required to submit to the Legislature by April 1, 2020 a report evaluating the program based on information provided to us from the administration in October 2019.

Structure of This Report. This report responds to the Chapter 52 reporting requirement. First, we provide background information about the California Competes program and the changes that the Legislature made in 2018. Next, we describe the effects of these changes on the program in 2018‑19, the first year of their implementation. We then assess how the changes have affected the administration of the California Competes program and consider whether it is more or less effective than before. Lastly, looking forward, we suggest working to find ways to expand the pool of qualified applicants and advise the Legislature to continue its oversight of the program.

California Competes Is an Economic Development Incentive Program. California Competes is an economic development incentive program administered by the Governor’s Office of Business and Economic Development (GO‑Biz). Companies must apply to the program and be selected by GO‑Biz to receive a credit. The successful applicants then negotiate a written agreement with GO‑Biz that specifies hiring and investment targets over a five‑year period. An oversight committee also must approve these agreements in a public meeting. GO‑Biz posts a list of tax credit agreements online. Companies that satisfy their agreed‑upon hiring and investment terms outlined in the agreements may claim a credit against their state corporation tax (CT) liabilities. Some types of companies—limited liability companies and partnerships—do not pay CT, and their owners may claim the credits against their personal income tax (PIT) liabilities. For general information about the administration of California Competes, please refer to our October 2017 Review of the California Competes Tax Credit report.

California Competes Cost $57 Million in 2018. As of November 2019, 1,043 credit agreements had been negotiated and approved. The companies that have tax credit agreements can only claim a credit after they have met the specified amounts of hiring and investment. Once companies have notified GO‑Biz they are in compliance, they can claim the credit. Consequently, there is a significant delay between when the credit agreement is negotiated and when the company claims the credit. Through tax year 2018, taxpayers have claimed a total of $125.1 million in credits. Figure 1 shows how the amount of credits claimed has grown over time. About $57 million in credits were claimed in 2018—$45 million in CT and $12 million in PIT. 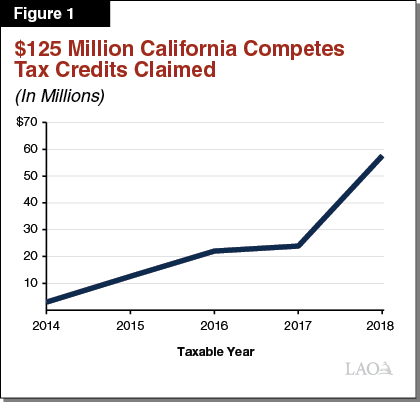 Chapter 52 also reduced the total amount of new credits that GO‑Biz may allocate in any fiscal year, from $200 million to $180 million.

Applicants Must Demonstrate How Credit Will Create New Jobs. GO‑Biz awards California Competes credits through a formal two‑stage evaluation and selection process. After eliminating the least competitive applicants in the first stage of this process, GO‑Biz requests additional documentation from those applicants remaining. In the second stage of this process, GO‑Biz reviews the information provided by each applicant in order to determine whether the applicant has demonstrated how the financial incentive of the credit will create jobs in this state that might not otherwise be created. In their October 2019 report to us, GO‑Biz identified the following examples as reasons to disqualify applicants:

In addition to the above criteria, GO‑Biz continues to consider 12 additional factors specified in state law when making the final determination of which applicants they will negotiate tax credit agreements with. Examples of these additional factors are the level of compensation paid by the applicant, whether the proposed business or project is in a disadvantaged area, the training offered to employees, and the strategic importance of the business or project to the state. 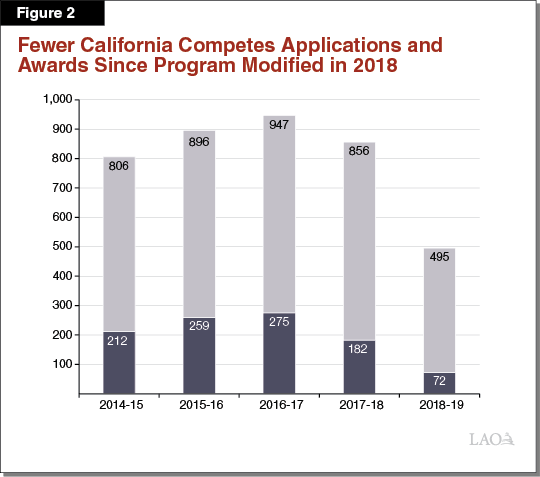 Average Credit Agreement Amount Is Bigger. GO‑Biz signed tax credit agreements with 72 applicants in the 2018‑19 fiscal year. This is a lower number than before the program was changed. Figure 2 shows that GO‑Biz previously awarded significantly more credits each year. Consequently, while the size of the awards varies widely, the average amount of each agreement is significantly bigger. The average amount of the 72 agreements in 2018‑19 was $2.7 million. The average agreement was under $1 million before the Legislature changed the program in 2018.

Manufacturers Receive the Biggest Share of Credits. Forty‑seven manufacturing companies, 65 percent of the total number of awards in 2018‑19, signed California Competes tax credit agreements. As shown in Figure 3, these account for about 60 percent of the total awards by dollar value, a significant increase since 2017 when they accounted for 37 percent. The share of credits received by some other industrial sectors—especially wholesale and retail trade—has significantly declined since the program was changed in 2018.

Number of Jobs Created Unclear. The companies awarded credits in 2018‑19 agreed to create more than 13,000 jobs and invest a total of $2 billion. We cannot say whether these figures represent the net economic impact of these tax credit agreements in California. As we noted in our 2017 evaluation of the program, the full effects of the credits on the state’s economy are somewhat uncertain. Some of these companies may have increased their hiring here in other ways or may even have proceeded with their projects here even if they had not received a credit. At the same time, some of the projects likely also have spillover benefits—through which other companies, such as suppliers and distributors, subsequently increase their hiring and investments here.

Modified Program Appears to Be Better Targeted. The changes made to the program in 2018 appear to have more narrowly targeted the program to tradable businesses. In particular, the requirement for applicants to demonstrate how the credit influences their ability to create new jobs in California, by the applicant or any other company, has led GO‑Biz to address many of the concerns we raised about California Competes in our 2017 evaluation. In their October 2019 report to us, GO‑Biz describes how they implemented the new requirement. GO‑Biz treats this requirement as a mandatory threshold. GO‑Biz rejects applications that cannot explain or show how the credit will create a net increase in California employment.

Administration of Threshold Requirement Is Subjective. While an increased focus on demonstrated job creation is a positive step, the challenge remains that enforcing this threshold unavoidably requires GO‑Biz to make subjective judgments. The October 2019 GO‑Biz report included detailed narrative justifications for each award that was made in the 2018‑19 fiscal year. We observed a wide degree of variation between the reasoning described for whether the credit would influence the decisions of the applicants. However, GO‑Biz made a significant effort to document how, in their view, the applicant satisfactorily demonstrated how the credit would influence their ability to create new jobs in California. This assessment is necessarily a subjective one and reasonable people could disagree about whether an applicant meets the threshold.

Limited Application Pool Affects Ability to Consider Other Factors. In 2018‑19, the California Competes program had significantly fewer applications. While fewer applications has allowed GO‑Biz to spend more time evaluating each one, there is a less competitive pool of qualified applicants. Of the applicants who move into the second stage of the evaluation process, most are subsequently rejected because they cannot demonstrate how the credit would influence their ability to create new jobs in California. Consequently, nearly all of the remaining applicants qualify for a tax credit agreement. This has resulted in only limited consideration of the other 12 statutory factors. A larger, more competitive applicant pool might result in the additional factors having more effect on which companies receive awards. We are uncertain whether the smaller number of applicants reflects the more explicit focus on tradable businesses or too few qualified companies are aware of the program.

Fewer Credit Awards May Reduce Oversight Burden. The California Competes program also made fewer awards in 2018‑19. Since fewer awards are being made, members of the oversight committee may have more time to review each tax credit agreement. In addition, GO‑Biz staff also may be able to spend more time on outreach and managing the program.

Qualified Small Businesses Appear to Be Competitive. Before the program was changed in 2018, 25 percent of the credits were set aside for small businesses—defined as having annual revenue below $2 million. In our 2017 report, we observed that there were too few eligible small business applicants to use all of the available credits. Moreover, many of the small businesses that received credits prior to the 2018 change were non‑tradable businesses and would not have been able to demonstrate how the credit would influence their ability to create new jobs in California. While GO‑Biz did not track how many of the applicants in 2018‑19 had annual revenue of less than $2 million, they indicated that few of the 72 companies awarded credits would have previously qualified as a small business. However, by other measures, many of the credit recipients are not large companies. About 45 percent of the credit agreements are with companies with annual revenue below $15 million and about 10 percent have no annual revenue (but some of these likely are owned by large companies). There is no indication that otherwise qualified small businesses are in any way disadvantaged by the evaluation process.

Develop Outreach Strategy to Expand Applicant Pool. A larger pool of qualified California Competes applicants would increase the competition for available credits. This would then allow GO‑Biz to prioritize companies that also scored well on the other 12 factors that are of importance to the Legislature. The Legislature may consider requiring GO‑Biz to develop a focused outreach strategy aimed at further increasing awareness of the California Competes program, especially among out‑of‑state businesses that may be considering expanding in or relocating to California.

Continue Legislative Oversight. California Competes provides GO‑Biz with a significant amount of flexibility and discretion. The evaluation and selection process requires GO‑Biz to make subjective judgments. In our view, GO‑Biz has administered the program in good faith and has responded seriously to the concerns we raised in 2017. Nonetheless, any program that is allowed this level of subjective judgment runs the risk of making inappropriate decisions under different circumstances. Consequently, such programs need to be transparent and be subject to formal oversight. To this end, GO‑Biz makes the tax credit agreements public before the oversight committee meets to approve them. Moreover, the oversight committee includes a majority of members—the State Treasurer and two Legislative appointees—who are independent from the administration. In addition, when extending the program in 2018, the Legislature took steps to continue its oversight of the program by enacting the 2023 sunset date. At that time, we recommend that the Legislature assess whether California Competes continues to accomplish its intended purpose and make a decision about extending the credit based on those findings.