Colleges Maintain Reserves for Multiple Reasons. Local reserve levels are an important factor that oversight bodies and credit-rating agencies use to assess local governments’ fiscal health. For community colleges, the CCC Chancellor’s Office and the Accrediting Commission for Community and Junior Colleges routinely monitor local college reserve levels. Local reserves are critical for several reasons. Local reserves allow community colleges (as they do other local agencies) to sustain their operations even if their annual funding drops due to economic recessions. Local reserves also allow colleges to handle lower-than-budgeted local property tax receipts or unexpected drops in enrollment. Additionally, local reserves help colleges manage their cash flow and pay their bills while awaiting receipt of funds. Local reserves can be especially helpful during times when the state is deferring payments, as colleges might not receive their state funding until many months after they have incurred operating costs. Reserves help too in covering unexpected costs. For example, since campuses moved to remote operations, they have incurred higher technology and professional development costs. Though campuses in some cases ultimately might be reimbursed for certain costs, they might need to cover costs upfront. Colleges also use reserves to pay for large, planned, one-time purchases (such as a large-scale upgrade of instructional equipment).

Colleges Hold Both “Unrestricted” and “Restricted” Reserves. In this post, we examine both unrestricted and restricted reserve levels. The bulk of local and state funding supporting the CCC system is unrestricted—meaning that colleges may use the funding for any educational purpose. In contrast, some state funding, most federal funding (which is a smaller fund source for colleges relative to local and state funding), and fee revenue is restricted—meaning that colleges are required to use that funding for specific purposes, such as student financial aid, veteran resource centers, or parking. Reserves typically must be used consistent with the associated funds’ original purposes. Unrestricted reserves thus are available for any education purpose, whereas restricted reserves are available only for program-specific purposes.

Systemwide Reserves Increased in 2019‑20. The CCC system consists of 73 districts and 116 college campuses. Of the 73 districts, 72 are governed by locally elected boards and 1 (the Calbright College District) is governed by the state Board of Governors. Total systemwide reserves (unrestricted and restricted combined) were $2.3 billion as of June 30, 2020—$117 million (5.3 percent) higher than a year earlier (at the end of 2018‑19). They were about double the level of ten years earlier. Systemwide reserves increased not only in dollar terms but also as a percentage of annual operating expenditures. As of June 30, 2020, systemwide reserves equated to 22 percent of annual operating expenditures, up about 0.5 percentage points from a year earlier. As Figure 1 shows, total reserves as a share of annual operating expenditures have been trending upward since 2007‑08. (We show data starting in 2006‑07—the year the Chancellor’s Office began compiling data separately for unrestricted and restricted reserves.) 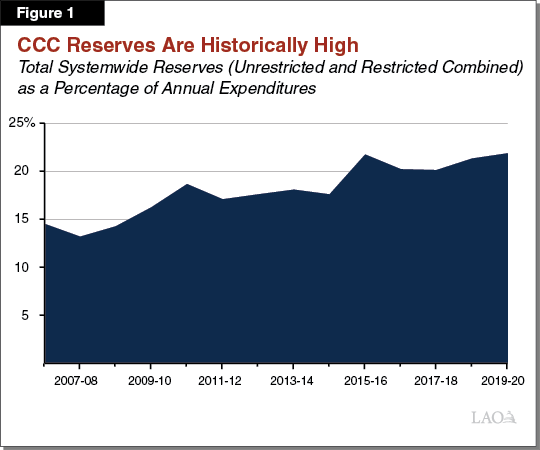 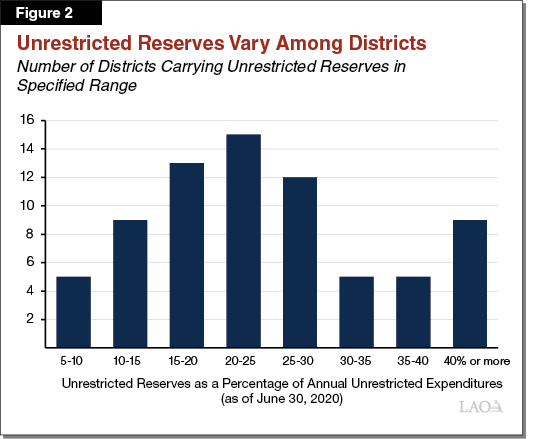 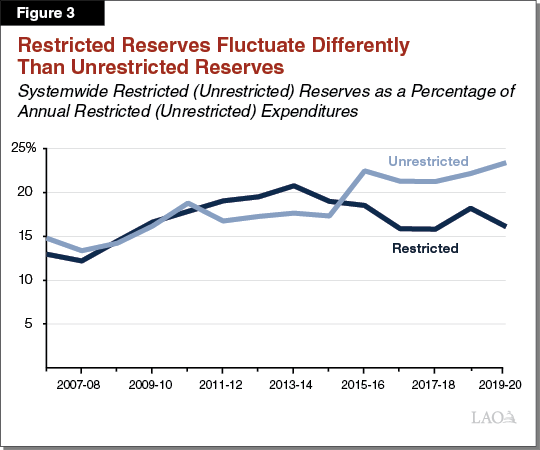 Restricted Reserves at Nearly Half of Colleges Declined Over Last Year. From June 2019 to June 2020, 28 districts had increases in their restricted reserves as a share of annual restricted expenditures, whereas 35 districts had decreases. (Of the remaining ten districts, nine had no restricted reserves at the end of either of the past two fiscal years, and one district—Calbright—had no restricted expenditures.) Of the districts with decreases, seven had decreases of greater than 10 percentage points. Districts likely are drawing down these reserves to cover revenue declines in areas like parking due to campuses operating at reduced capacity. They also could be drawing down reserves in restricted programs that provide additional student and faculty support, as the need for such support likely has been amplified since the onset of the pandemic and shift to remote instruction.

Outlook Has Improved but Monitoring Colleges’ Fiscal Health Remains Important. Systemwide, community college reserves grew somewhat from June 2019 through June 2020. Since June 2020, the state’s fiscal outlook, as well as the Proposition 98 outlook for school and community college funding, has improved. Developments over just the past couple of months also bode well for community colleges. A second round of federal relief funding, which provides greater benefit to community colleges than the first round, was announced in late December 2020, with funds to begin arriving automatically to colleges over the next few weeks. In addition, the Governor submitted proposals in January to eliminate most community college payment deferrals and provide a cost-of-living adjustment to apportionment funding. For all these reasons, community colleges generally are not expected to experience a notable drop in their local reserves or major deterioration in their overall fiscal health throughout 2021‑22. The future of the pandemic, economy, and state revenues, however, remains uncertain, making continued fiscal oversight by the Chancellor’s Office as important as ever.