The 2019‑20 Budget Made Several Programs’ Costs or Augmentations Subject to Suspension. In the 2019‑20 May Revision, the administration anticipated an operating deficit would emerge—absent further actions—under its multiyear projections. In response, the final budget act made some program spending amounts subject to potential suspension. Under this budget bill language, if certain conditions persisted, these program costs would be suspended—resulting in General Fund savings—on December 31, 2021. This language was included in both the 2019‑20 and 2020‑21 budget acts.

How the Suspensions Work. Current law empowers the Department of Finance (DOF) to administer the suspension calculation. The formula is shown in Figure 1. Under the formula, DOF compares estimates of General Fund revenues to General Fund expenditures—without suspensions—in 2021‑22 and 2022‑23. If DOF determines projected revenues will exceed expenditures, then the programs’ ongoing expenses continue on an ongoing basis. If not, expenditures across nearly a dozen different programs are automatically suspended (with no explicit provision for reinstatement). For the purposes of the calculation, we understand DOF would include the entering fund balance (the carry‑in from the previous year’s budget) in revenues. 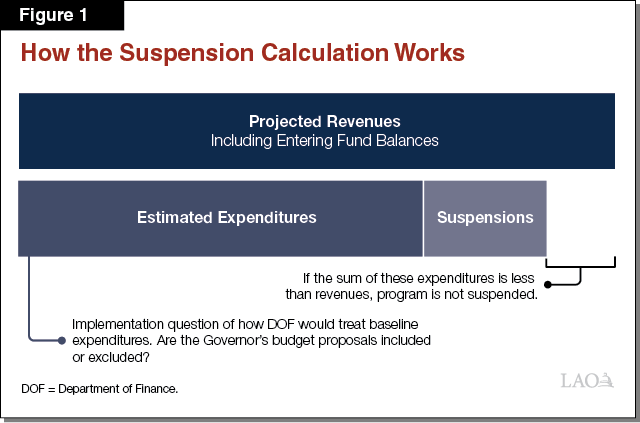 Under Current Law, Programs Would No Longer Be Subject to Suspension… Under current law, the suspension calculation would occur once: at the 2021 May Revision. If, at that time, DOF finds revenues exceed expenditures for both 2021‑22 and 2022‑23, the suspensions would not become operative and the costs would continue on an ongoing basis. Because the state has a significant windfall in 2021‑22, as long as Governor’s proposals are excluded from expenditures in the calculation, then DOF would find that revenues are sufficient to fund expenditures including the suspensions. As a result, spending on those programs would continue.

Figure 2 shows the list of program items that would be subject to suspension under the Governor’s budget and how this list compares to those enacted in the 2019‑20 and 2020‑21 Budget acts.

Some Suspension Items Provide Direct Funding for Core Government Services. A number of the suspension amounts, especially those with larger dollar amounts, provide direct funding for longstanding or core government services. For example, some major items that are subject to suspension are:

Proposals to reduce or eliminate IHSS services generally are vulnerable to litigation asserting that the change violates federal Medicaid rules and/or puts recipients at risk of institutional placement, which could violate the United States Americans with Disabilities Act (ADA). In the past, courts have issued temporary injunctions preventing the state from making reductions to Medicaid personal care services programs, including IHSS, due to possible violation of federal Medicaid and ADA rules. It is possible that future state proposals to eliminate or reduce IHSS services could face the similar legal challenges.

Maintaining Suspensions Treats Ongoing Programs as Temporary. The suspension language treats policies that are fundamentally ongoing in nature as temporary. For example, health and developmental services‑related spending amounts subject to suspension generally support core programmatic funding intended to improve consumer access to an entitlement program. Some reductions—such as the IHSS 7 percent service hour reduction—also could present legal risks in addition to being a reduction to a core service. Treating ongoing program costs as temporary fundamentally understates the true ongoing cost of the state’s policy commitments.

Suspending Core Government Services Poses Programmatic Issues. Many of the suspension items, particularly the larger ones, are related to core government services. The suspension language creates uncertainty in these programs, which can pose problems for providers and recipients of these services. The potential suspension of supplemental rate increases for developmental services providers makes staffing and planning more difficult. For example, hiring permanent staff to work directly with program consumers is more challenging when the funding is uncertain. Similarly, retaining staff may be more difficult if a provider cannot assure employees that any pay increase will remain intact. More staff turnover means less stability for consumers. In some cases, this uncertainty can work against the Legislature’s objectives for the spending.

Suspensions Were Not Originally Proposed as an Annual Calculation. The suspension language enacted into law in 2019‑20 was framed as a one‑time determination made in May 2021. By proposing a new suspension calculation, however, the administration appears to intend to make this calculation ongoing. This is not consistent with our understanding of what the Legislature envisioned.

Recommend Legislature Reject Suspension Language… We recommend the Legislature reject the Governor’s proposal to create new budget bill suspension language. Considering that most of the costs of the suspension items directly fund core state services, including those costs in multiyear fiscal projections is appropriate. Given the state’s multiyear deficits, however, the state likely will need to make changes to its budget within the next few years. As it stands, the state probably cannot afford existing programs, avoid the suspensions, and fund the Governor’s proposals over the next few years. The Governor’s proposal to include new suspension language simply papers over a portion of a larger structural problem.

…But Evaluate the Merits of Some Suspension Items. Some of the suspension items are recently created programs. As part of the broader effort to address the ongoing budget problem, evaluating whether these newer programs are achieving their intended goals would be worthwhile. To this end, the Legislature could take a look at reporting and oversight to ensure programmatic design aligns with its policy objectives and that the programs are resulting in the intended outcomes.