The federal American Rescue Plan (ARP) that passed on March 11 expanded a number of federal income tax credits. This piece will briefly describe the changes to three credits that apply to many lower-income and middle-income filers: the Earned Income Tax Credit (EITC), the Child Tax Credit (CTC), and the Child and Dependent Care Expenses Credit (“child care credit”). We also discuss changes to the dependent care exclusion which is linked to the child care credit. These changes are for tax year 2021 only except where otherwise noted. (We refer to the prior provisions of these tax credits as “prior law.” Because the new provisions are scheduled to only be in effect in 2021 in most cases, we anticipate the provisions to revert to prior law starting in 2022.)

The federal EITC is a provision of the federal income tax code that allows filers with total income below a certain level to reduce their tax liability by an amount that depends on their earnings from paid work or self-employment. Because the federal EITC is “refundable,” any amount by which the credit exceeds a filer’s tax liability is paid out in the form of a tax refund. The ARP made two significant changes to the EITC for 2021: (1) increased the credit amounts available to childless workers, and (2) broadened the age range for eligible filers from 24 to 65 years old to 19 and over. The ARP also gave people the option to use their income from either 2019 or 2020 when filing their 2020 returns.

Childless Filers’ Maximum EITC Will Nearly Triple. Figure 1 below shows how childless filers’ EITC amounts will change under the new law. As the filer’s earnings increase, the EITC amount first grows over a phase-in range, then flattens, then gradually declines over a phase-out range until the credit reaches zero. The ARP increased the maximum benefit for childless filers from $543 to $1,502 and extended both the income range over which filers can claim the maximum benefit and the range over which they can claim any EITC amount. 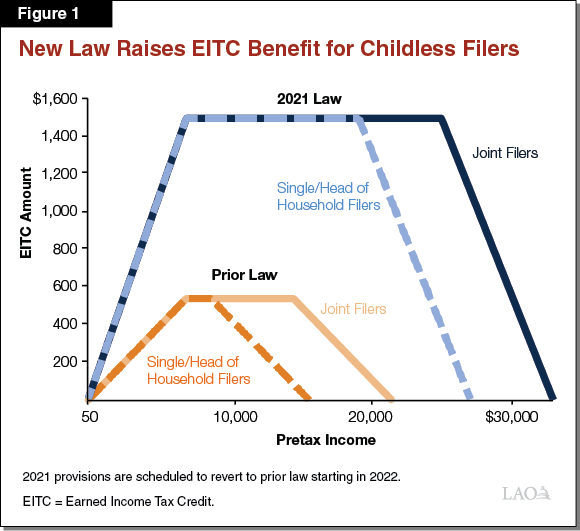 State EITC Unaffected by Federal Changes. These changes are not expected to affect California’s own EITC, as its relevant provisions are specified in state statute and are not linked to the federal provisions that changed under the ARP.

CTC Fully Refundable, Income Threshold Eliminated. For 2021 only, the credit amount will be fully refundable for all eligible filers regardless of their earned income amounts.

Credit Will Be Paid Monthly Starting in July. The ARP directs the federal Internal Revenue Service to pay one-twelfth of eligible filers’ credit amounts each month from July to December of 2021. Currently, all federal tax benefits are only available on an annual basis when returns are filed.

CTC Benefit Will Not Count Against Income Eligibility for California’s Major Safety Net Programs. The Department of Social Services recently released guidance that benefits granted under the expanded CTC will not count as income when determining either eligibility or benefit amounts for CalFresh, California Work Opportunity and Responsibility to Kids, or Supplemental Security Income/State Supplemental Payments, among other safety net programs.

The federal child care credit is an income tax provision allowing filers with income below a certain level to reduce their tax liability by a percentage of their eligible child care expenses. Under permanent law, filers can claim a nonrefundable credit of between 20 percent and 35 percent (depending on income) of the first $3,000 of annual expenses for one child under the age of 13 or the first $6,000 (combined, not individually) for two or more children. Unlike the EITC or CTC, the permanent child care credit has no income limit.

ARP Raises Credit Percentages, Allowable Expense Amounts. For tax year 2021 only, filers are allowed to claim up to 50 percent of the first $8,000 of expenses for one child under age 13 or the first $16,000 of expenses for two or more children. As Figure 2 below shows, the 2021 credit percentage starts to phase down at a much higher income level than under prior law. The 2021 provision also includes an income limit, as the credit percentage phases down again for filers with income over $400,000. 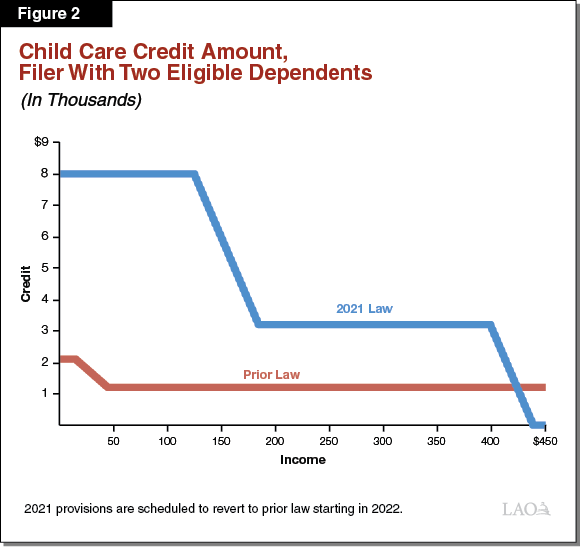 Under prior law, filers could exclude up to $5,000 (or $2,500 if married filing separately) of employer-paid child care expenses from taxable income. Reducing the filer’s taxable income in this manner lowers their tax liability. Filers are allowed to claim both the exclusion and the child care credit but are not allowed to use the same expenses for both. For example, a filer with head of household status, one eligible dependent, and $7,000 of child care expenses could claim a credit for a percentage of the first $3,000 of expenses and then exclude the remaining $4,000 from their income if the expenses were paid by the filer’s employers.

ARP Increases Exclusion Amounts for 2021. For 2021 only, the exclusion amount is raised to $10,250, or to $5,250 for married filers filing separate returns. The restriction that the same expenses cannot be used for both the exclusion and the child care credit remains in effect.