This post describes our fiscal outlook for Medi‑Cal, the major factors that we expect to drive changes in General Fund spending in Medi‑Cal, and a number of our key underlying assumptions. (Specifically, this post concerns projections of Medi‑Cal local assistance spending within the Department of Health Care Services [DHCS].)

We estimate that Medi‑Cal General Fund spending will be $27.5 billion in 2021‑22, a downward adjustment of $470 million compared to the 2021‑22 Budget Act estimate. This adjustment largely is driven by our expectation of higher levels of federal funding being available (offsetting General Fund costs) than was previously anticipated. Between our revised 2021‑22 estimate and 2022‑23, we project General Fund costs in Medi‑Cal to grow by $3.6 billion to $31.1 billion. This net increase primarily is due to our expectation that enhanced (pandemic‑related) federal funding no longer will be available and a scheduled ramp up in costs for augmentations approved in the 2021‑22 Budget Act. Projected declines in caseload and its associated costs reduce the projected growth in year‑over‑year spending below what it otherwise would be.

Between 2022‑23 and 2025‑26, we project annual General Fund costs in Medi‑Cal will grow by $3.5 billion to $34.6 billion. This cost growth largely is attributable to the assumed full phase out of certain non‑General Fund sources of funding for Medi‑Cal (most notably, from the managed care organization [MCO] tax) and underlying per‑enrollee cost growth related to projected changes in utilization and service costs.

Medi‑Cal, the state’s Medicaid program, provides health care coverage to around 14 million of the state’s low‑income residents. Medi‑Cal costs generally are shared between the federal and state governments. In a typical year, the General Fund covers a little more than 20 percent of total Medi‑Cal costs, with federal funds and other state and local funds respectively covering the remaining 65 percent and 15 percent of total costs.

Main Fiscal Outlook Assumes Declining Unemployment Rates. While there remains considerable uncertainty going forward, our 2022‑23 Fiscal Outlook main forecast assumes that the unemployment rate gradually will decline over the next several years. Should this decline prove slower, faster, or more volatile than assumed in our outlook, General Fund spending in Medi‑Cal could be substantially higher, lower, or more volatile than we project.

Fiscal Outlook Assumes Expiration of the National Public Health Emergency (PHE) Declaration Related to Coronavirus Disease 2019 (COVID‑19) in Early 2022. In early 2020, the federal government declared a national PHE in response to the COVID‑19 pandemic. There are a number of temporary policy and financing rule changes within the Medi‑Cal program that generally remain in place for the duration of the PHE. For example, Congress approved a 6.2 percentage point increase in the federal government’s share of cost for most Medicaid services for the duration of the PHE. In addition, the same federal legislation effectively prohibits the state (as a condition of receiving the enhanced federal share of Medicaid costs) from terminating the eligibility of current Medi‑Cal enrollees, except in limited circumstances, until after the PHE ends. This prohibition is known as the “continuous coverage requirement.” When the national PHE declaration will end is an assumption that significantly impacts our spending projections. The 2021‑22 Budget Act assumed the PHE declaration would expire by the end of December 2021. While the end date of the PHE declaration is subject to considerable uncertainty, the federal government recently announced the renewal of the PHE through at least the first half of January 2022 (with enhanced federal funding expiring at the end of March 2022). Consequently, our outlook assumes that the PHE declaration will expire at this time. We describe the fiscal implications of this assumption, as well as of the alternative scenario where the PHE is extended beyond early 2022, in further detail later in this post.

Fiscal Outlook Assumes Current State and Federal Law and Policy. Our outlook generally assumes current laws and policies remain in place throughout the outlook window (through 2025‑26). This includes federal law and policy. For example, we assume the state’s managed care organization (MCO) tax will expire halfway through 2022‑23 as scheduled in statute. (We describe the fiscal implications of our assumptions regarding the MCO tax in further detail later in this post.)

Below, we summarize our projected adjustments to the Medi‑Cal budget and describe the major drivers of these changes, both in the near and longer terms. The “near term” includes the current year (2021‑22) and budget year (2022‑23) and the “longer term” includes the final three years of the outlook window (2023‑24 through 2025‑26).

Hundreds of Millions of Dollars in Estimated General Fund Savings in 2021‑22… We estimate that Medi‑Cal General Fund spending will be $27.5 billion in 2021‑22, a downward adjustment of $470 million compared to the 2021‑22 Budget Act (budget act) estimate. As shown in Figure 1, there are three major drivers of this downward adjustment. First, we reflect $280 million in General Fund savings due to the 6 percentage point increase in the federal share of cost for home‑ and community‑based services (HCBS) authorized by the American Rescue Plan Act for the period of April 2021 through March 2022. (These savings only reflect reduced General Fund costs in HCBS programs operated by DHCS. Per state and federal law, all associated HCBS program savings ultimately will be used to support various HCBS program augmentations, as outlined here.) Second, we estimate $140 million in net General Fund savings due to our assumption that certain program rules related to the PHE remain in place through March 2022 (the end of the quarter during which the PHE expires)—rather than through December 2021 as was assumed in the budget act. This amount is the net effect of (1) an extra three months with the enhanced federal share of cost for Medi‑Cal and (2) higher costs for certain temporary COVID‑19‑related policies which expire at or after the end of the PHE (such as certain temporary provider reimbursement rate increases). Third, we estimate slower caseload growth than was projected in the budget act, resulting in $70 million in General Fund savings. 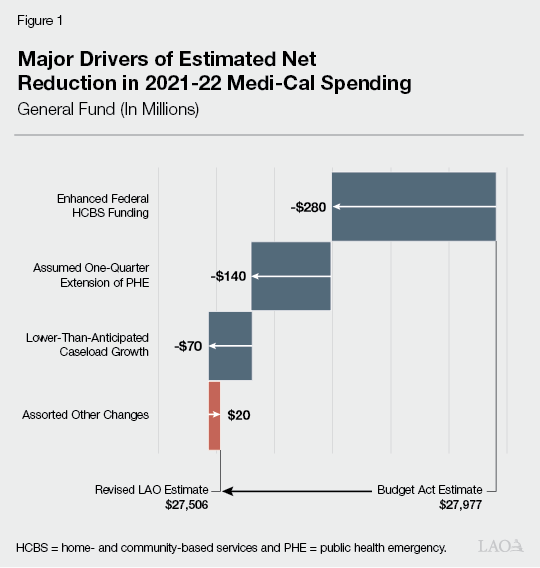 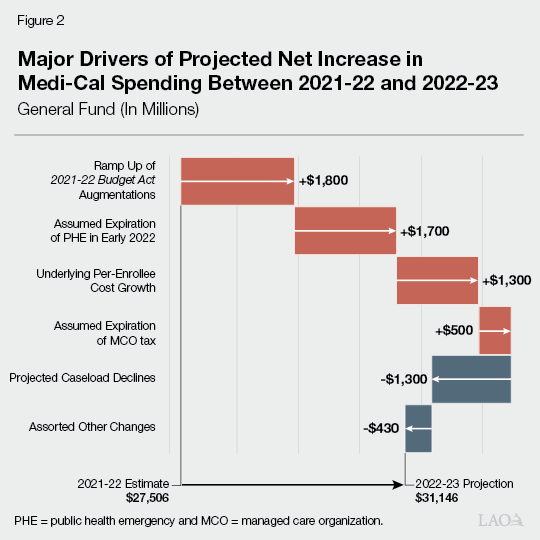 Significant Medi‑Cal Caseload Growth Under the PHE. As we noted previously, the Medi‑Cal caseload (and its associated costs) have increased dramatically during the PHE. Between March 2020 and July 2021, total Medi‑Cal caseload has grown from around 12.5 million enrollees to roughly 14 million enrollees, a 12 percent increase. This increase largely was driven by the continuous coverage requirement and economic factors such as higher unemployment. While the budget act assumed a 7.6 percent increase in caseload between 2020‑21 and 2021‑22, we estimate growth will be 6.8 percent due to actual caseload through June 2021 being lower than assumed in the budget act. (This reduction in caseload growth occurs despite our assumption that the PHE lasts one additional quarter compared to budget act assumptions.) Consequently, we expect Medi‑Cal caseload costs to be $70 million lower in 2021‑22 than was assumed in the budget act.

Project Large Decline in Caseload Following End of the PHE Declaration. As shown in Figure 3 on the next page, we project a large decline in the overall Medi‑Cal caseload following the end of the PHE declaration. In particular, during the 12‑month period after the continuous coverage requirement expires, we expect caseloads to drop substantially as a result of the resumption of eligibility terminations for enrollees found ineligible for the program under normal eligibility rules along with improving economic conditions. Between 2021‑22 and 2022‑23 under our projections, Medi‑Cal caseload will shrink by about 1 million enrollees (7.4 percent), which will result in reduced General Fund costs in 2022‑23 of about $1.3 billion relative to 2021‑22. We expect caseloads will continue to decline through the outlook period, largely due to reductions in the unemployment rate, but that the rate of decline will begin to level off in the final years of the outlook window. Accordingly, while we project a total caseload decline of around 3 percent between 2022‑23 and 2023‑24, we project essentially flat caseload trends in the final years of the outlook. Despite these anticipated declines, we assume caseload will remain higher than during the pre‑pandemic period due to our long‑run demographic and labor market projections. For example, while our outlook assumes that the state’s unemployment rate will continue to improve relative to its peak during the pandemic (15.2 percent), we assume that it will remain higher than the pre‑pandemic unemployment rate of about 4.3 percent. 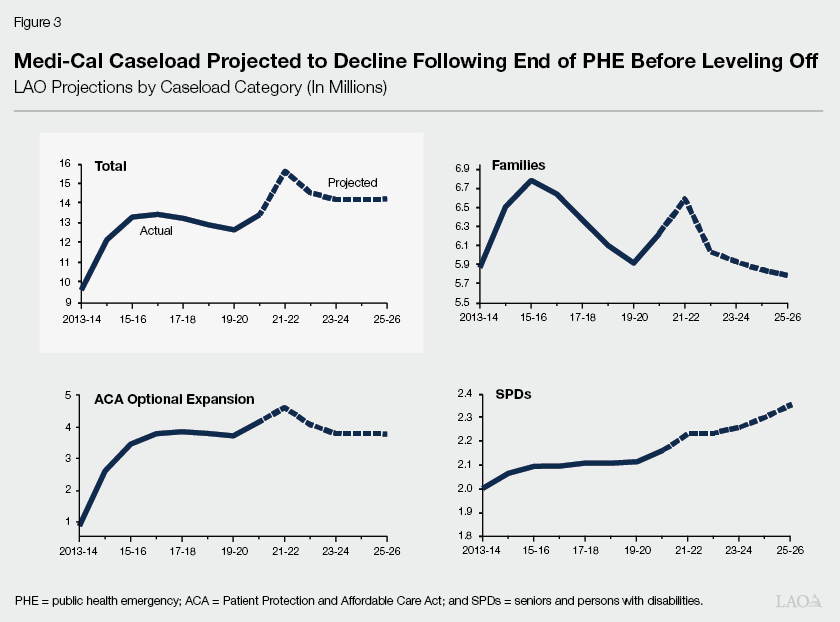 Caseload Projections Subject to Considerable Uncertainty. Our caseload estimates are subject to significant uncertainty compared to prior years. As described earlier, the end of the PHE declaration has a significant impact on caseload. Consequently, if the PHE declaration is extended beyond the third quarter of 2021‑22, Medi‑Cal caseload would not decline as we forecast. Moreover, while there have been significant gains in the labor market over the course of 2021, there is uncertainty as to when jobs will recover, further impacting our caseload estimates.

This section provides further detail on the fiscal implications of two major assumptions—that the PHE declaration will expire in January 2022 and that the MCO tax will expire halfway through 2022‑23 without reauthorization. Additionally, we estimate the fiscal impacts of alternative assumptions: (1) if the PHE declaration were to remain in place beyond early 2022 and (2) if the MCO tax is reauthorized at a similar level as the current tax. Finally, we note that if Medi‑Cal price inflation exceeds the historical average, General Fund cost pressure in Medi‑Cal could be higher than we project.

Assumed Expiration of PHE in Early 2022

…Which Likely Will Be Offset Partially by Other Savings Resulting From the End of the PHE Declaration. With the assumed expiration of the enhanced federal funding at the end of March 2022, the continuous coverage requirement also will end. As we described above, we expect caseload will decline significantly once the continuous coverage requirement expires. This, as well as the expiration of other policies in place during the PHE declaration (such as reimbursement increases for certain providers), should reduce General Fund costs in Medi‑Cal. We project that such reduced costs would offset over one‑third of the higher General Fund costs due to the expiration of the enhanced federal funding.

An Extension of the PHE Beyond Early 2022 Would Bring Significant Net General Fund Savings. Our assumed expiration date for the PHE is highly uncertain. When the expiration occurs ultimately will depend on public health conditions around the country, as well as other national considerations. For each additional quarter that the PHE declaration remains in effect beyond January 2022, we would expect additional General Fund savings in Medi‑Cal of around $500 million. This amount reflects the net fiscal impact of (1) savings from the longer duration of enhanced federal funding and (2) additional costs related to the continuous coverage requirement’s effect on caseload, as well as other policies in place during the PHE.

Assumed Expiration of the MCO Tax

Inflation in the overall state economy has been considerably higher over the last several months than average historical levels. Although the consensus of economic forecasters anticipates that inflation will subside to historical levels within a year or so, these forecasts are subject to significant uncertainty. As Medi‑Cal price inflation and broader measures of inflation in the economy are different, the Medi‑Cal Outlook does not project any substantially increased cost from inflationary pressures. Should they arise, however, General Fund cost pressure in Medi‑Cal could be higher than we project.