Summary. This post summarizes the Governor’s budget assumptions and proposals related to the SSI/SSP program, including the Governor’s intent to increase SSP grants in 2023‑24. The post also summarizes other SSI/SSP goals the Legislature could pursue relative to the intended 2023‑24 SSP grant increase.

The SSI/SSP program provides cash grants to low‑income aged, blind, and disabled individuals. Grant levels for SSI/SSP are determined by both the federal government and the state. Specifically, the federal government pays for the SSI portion of the grant while the state pays the SSP portion of the grant. For 2022‑23, the Governor’s budget proposes $3.1 billion from the General Fund for the state’s share of SSI/SSP—an increase of $226 million (8 percent) over estimated 2021‑22 expenditures. This increase would bring total program funding to $10.3 billion ($3.1 billion from the General Fund and $7.2 billion federal funds) in 2022‑23. The primary driver of this increase is the full‑year cost impact of the 23.95 percent SSP grant increase that took effect on January 1, 2022.

Governor’s January Budget Assumes SSI/SSP Caseload Continues to Decline. The SSI/SSP caseload grew at a rate of less than 1 percent each year between 2011‑12 and 2014‑15. Beginning in 2015‑16, however, SSI/SSP caseload began to slowly decline at an average rate of 1.5 percent each year. As shown in Figure 1, the Governor’s budget projects that caseload will decrease by 3.8 percent in 2021‑22 and 2.5 percent in 2022‑23, which is a slightly higher rate of decline relative to past caseload trends. We are working with the Department of Social Services to better understand the reasons behind the continued decline in SSI/SSP caseload and will provide further comments at the time of the May Revision if necessary. 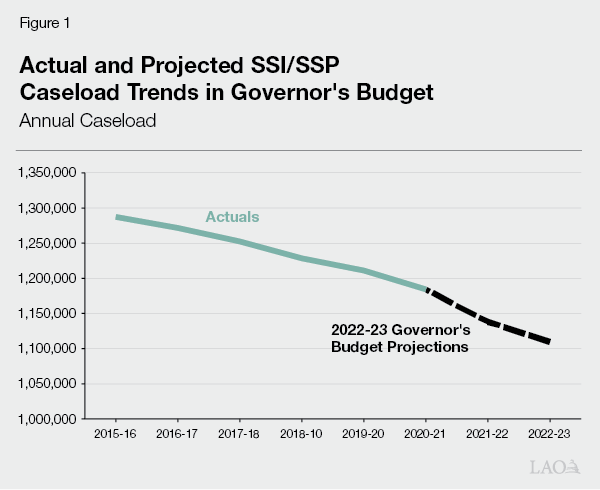 Federal Government Required to Provide Annual COLA to SSI Grants, While State Has Option to Provide Annual COLA to SSP Grants. The federal government is required to provide an annual cost‑of‑living‑adjustment (COLA) each January to the SSI portion of the grant. The federal COLA increase is based on the Consumer Price Index for Urban Wage Earners and Clerical Workers (CPI‑W). In years that the CPI‑W is negative (as was the case in 2010, 2011, and 2016), the federal government does not decrease SSI grants, but instead holds them flat.

The state has full discretion over whether and how to provide increases to the SSP portion of the grant. Until 2011, the state had a statutory annual COLA. (Despite the state statutory COLA, there were many years prior to 2011 when the COLA was not provided due to budget constraints.) Prior to the Great Recession, the state annual COLAs generally reflected whole‑grant COLAs. Whole grant COLAs worked by applying the California Necessity Index (CNI) to the total SSI/SSP grant. If the federal SSI COLA was not enough to increase total SSI/SSP grants to CNI‑adjusted levels, then the SSP portion of the grant was increased by the remaining amount. Alternatively, SSP grants occasionally were increased by applying the CNI only to the SSP portion of the grant (in 2016‑17 and 2021‑22). Additionally, the 2018‑19 budget included legislation to provide annual state COLAs beginning in 2022‑23, to the extent that funding is provided in future budget years. (We understand that the Governor’s multiyear grant projections do not include an annual state SSP COLA in 2022‑23 and onwards.)

During Constrained Budget Environment, SSP Grants for Individuals and Couples Were Reduced to Federally Required Minimum... The state is required to maintain SSP monthly grant levels at or above the nominal levels in place in March 1983 ($156.40 for SSP individual grants and $396.20 for SSP couple grants) in order to receive federal Medicaid funding. As shown in Figure 2, during the Great Recession, the state incrementally decreased SSP grants for individuals and couples until they reached these minimum levels in June 2011 and November 2009, respectively. 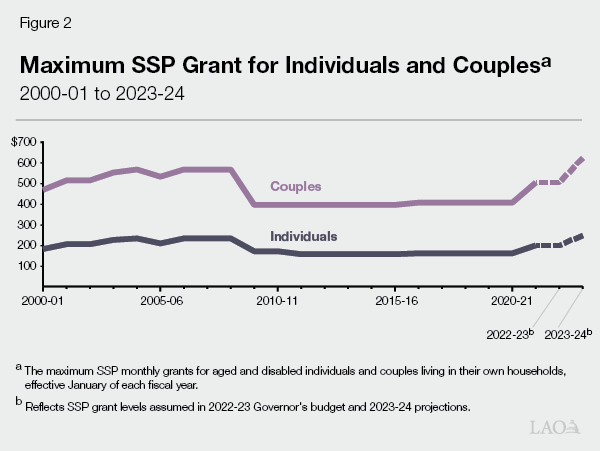 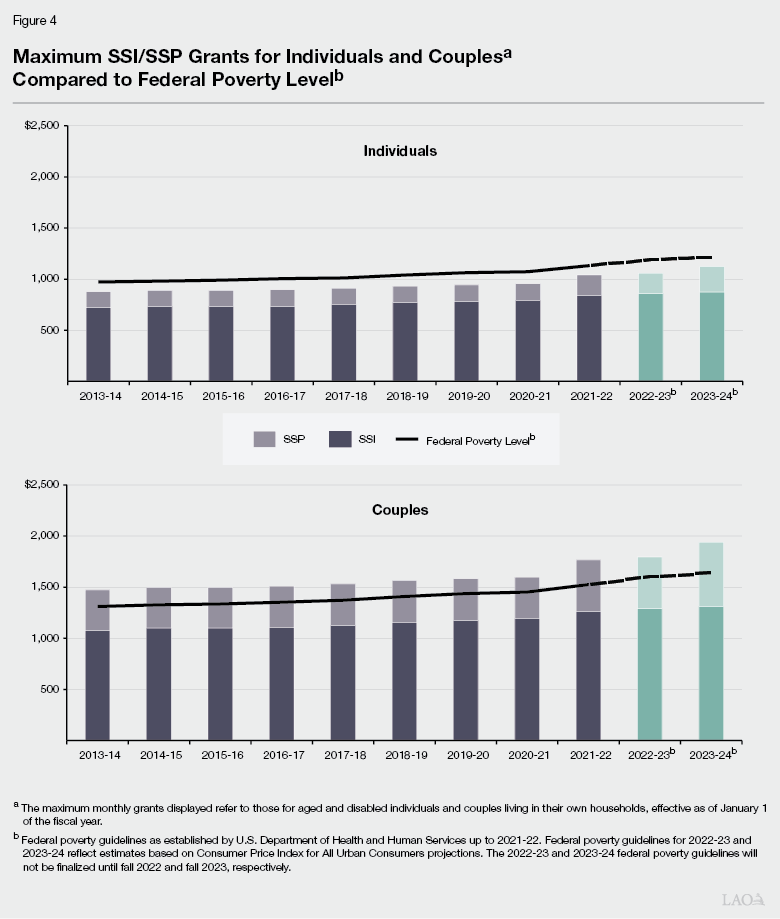 The administration’s planned SSP grant increase in 2023‑24 is intended to restore SSP grant levels for individuals and couples to “pre‑recession” levels, which we understand to mean the SSP grant levels in place in January 2009 (prior to the start of multiple SSP grant reductions). Additionally, the Governor’s stated intent to provide an SSP grant increase in 2023‑24 complies with the legislation included as part of the 2021‑22 budget agreement. However, we understand that the administration does not include ongoing SSP COLAs beginning 2022‑23 (providing COLAs would align with the intent language adopted in the 2018‑19 budget). While the Governor’s goal of restoring grants to their pre‑recession levels is one way of setting a goal for SSI/SSP grants, the Legislature may wish to set its own goals for where it would like SSI/SSP grant levels to be, and over what time period it would expect to take to get there. In doing so, considering the rising costs of inflation, the Legislature could also consider how to maintain the purchasing power of its ultimate SSI/SSP grant goal over time. Below, we provide examples of different ways the Legislature could approach possible SSP grant increases—depending on its specific goal.

Examples of Possible Goals for SSI/SSP Grant Levels. The Governor’s planned 2023‑24 SSP grant increase (from $199 to $247 for individuals and from $504 to $625 for couples) more than achieves our understanding of the administration’s intended goal increasing SSP grants to reach at least January 2009 levels ($233 for individuals and $568 for couples). However, as shown in Figure 5, the Governor’s planned 2023‑24 SSP grant increase would not be enough to achieve alternative definitions of “pre‑recession” levels and SSI/SSP goals, which we describe below. 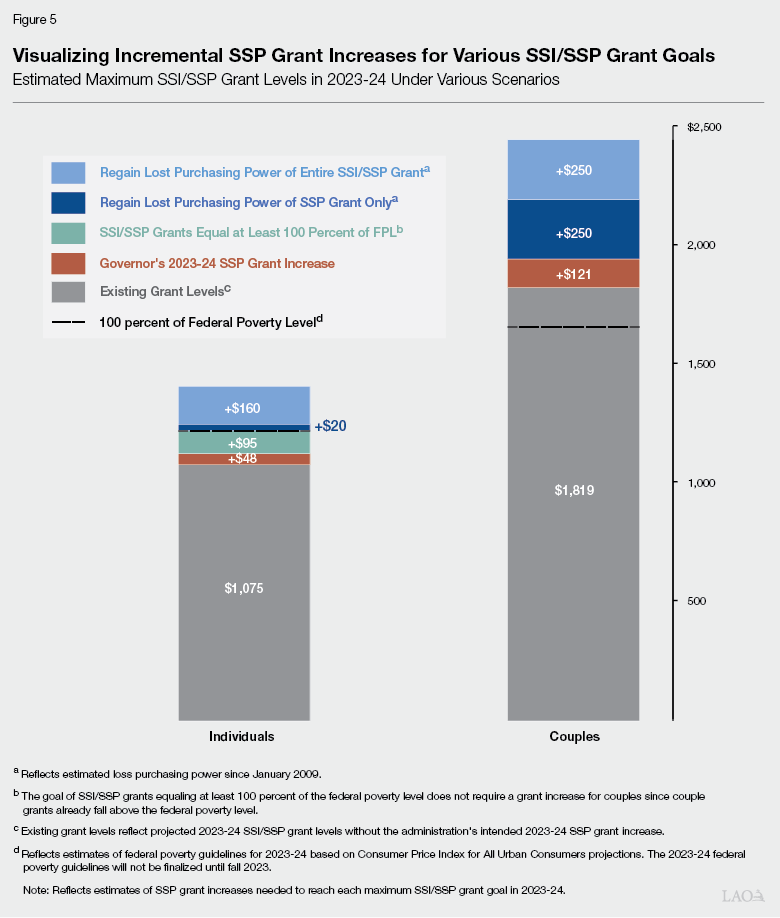