Summary. In the Governor’s 2022‑23 Budget, the administration proposes $54.6 million General Fund each year for three fiscal years to (1) shift funding for certain internal California Department of Technology (CDT) administrative expenditures and positions from its cost recovery fund to the General Fund, and (2) cover short‑term net revenue losses to the department resulting from some state entities moving their provision of contracted information technology (IT) services from CDT to private vendors. Over the three‑year period, CDT will re‑evaluate its State Data Center rates and services and then shift the requested funding back to cost recovery thereafter. This post provides background on CDT’s cost recovery model and rate development process for IT services, evaluates the proposals and available information on the rate re‑evaluation process, and offers our recommendations to the Legislature.

CDT. CDT is the administration’s main IT entity with broad authority over most aspects of technology in state government. CDT is organized into several offices, including the Office of Technology Services (OTech), as reflected in Figure 1. The department’s proposed 2022‑23 budget is $508.4 million ($96 million General Fund) and 1,018 positions. The remainder of CDT’s proposed 2022‑23 budget is funded through cost recovery—that is, billing for IT services it provides to state entities (and others) and using revenues from those services to cover most of its expenditures. 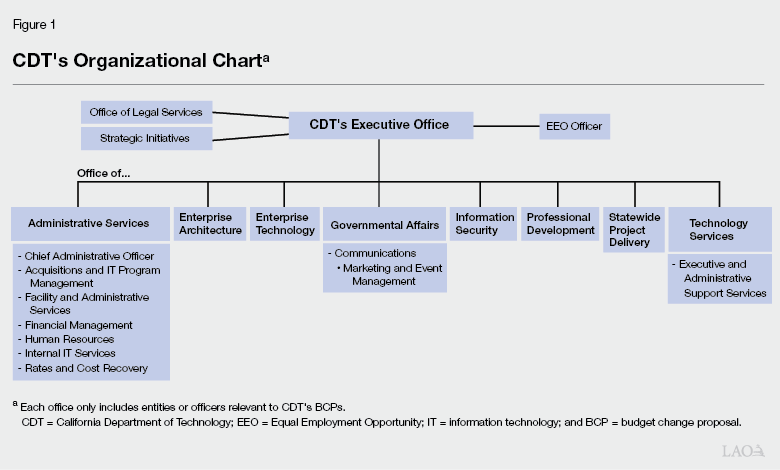 OTech. OTech provides IT services to state entities (and others) primarily through its State Data Center. OTech (and others) also manage statewide contracts for vendor‑hosted subscription services (VHSS)—that is, IT services provided and primarily supported by private vendors, not CDT—to offer services to entities at a lower cost than they might be able to negotiate with vendors as individual entities. (State entities, however, may enter into separate contracts with private vendors for IT services—even at a higher cost—because state entities generally are not required to use CDT’s IT services.)

Rate Development Process for State Data Center IT Services. CDT sets State Data Center IT service rates to recover the cost of services, both direct (such as hardware and software) and indirect (such as internal CDT administration). To calculate these rates, CDT generally divides the direct and indirect costs of a service by its projected demand. The department might consider other factors when setting service rates such as how costs are distributed across state entities (for example, to equitably distribute costs across entities with different budgets) and how simple the billing for, and collection of, revenues is for the department and state entities. As the projected costs of and demand for services change, CDT re‑calculates its service rates and submits them annually to the Department of Finance (DOF) for approval. For example, if demand for a service is projected to decrease but the costs of the service are projected to stay the same, CDT likely will propose an increase in the service rate.

Technology Services Revolving Fund (TSRF). The TSRF is CDT’s primary cost recovery fund. Revenues from the department’s State Data Center IT services are deposited into the fund, and expenditures on direct and indirect service costs are made from the fund. As a cost recovery fund, the TSRF does not maintain a balance from one fiscal year to the next like, for example, a special revenue fund. Accordingly, there is no fund balance to provide a cushion for increased expenditures or revenue losses. CDT requests its expenditure authority from the fund through the budget process. CDT estimates its expenditure authority primarily based on projected demand for its services at the rates approved by DOF. If demand for services is higher than anticipated, CDT can request further expenditure authority from DOF through recurring provisional budget bill language. (Recently, CDT also requested increased expenditure authority to cover increased demand for and expenditures on VHSS.) If demand for services is lower than anticipated, however, CDT absorbs the associated revenue losses until its service rates can be increased to account for lower demand or its service costs can be reduced. Net revenue losses—that is, how much lower actual and projected service revenues are than actual and projected expenditures on these services—can be covered by CDT more quickly by increasing service rates than by reducing costs because expenditures on direct service costs such as hardware and software are incurred by the department over several years.

The Governor’s budget proposes $54.6 million General Fund each year for three fiscal years, starting in 2022‑23, for CDT to (1) reduce State Data Center IT service rates by shifting funding for some of its internal administrative expenditures and positions from cost recovery to General Fund, and (2) cover short‑term net revenue losses in the TRSF resulting from some state entities moving the provision of their IT services from the State Data Center to private vendors because of, for example, lower service rates. CDT proposes that, over the next three fiscal years, it will undertake a “rate re‑revaluation process” to assess (among other considerations) its current rate development processes and State Data Center service offerings. The administration’s intent for this re‑evaluation is to make CDT’s cost recovery model more sustainable to, for example, avoid additional short‑term net revenue losses. Once a revamped cost recovery model and associated rate structure is in place, the administration would revert the expenditures and positions funded by General Fund in these proposals to cost recovery (in 2025‑26). The two components of these proposals are discussed further below:

CDT, however, suggests that some of the benefits of State Data Center services (such as continuous information security and service desk support) and other differences between state‑hosted and vendor‑hosted services make direct rate comparison difficult. Even so, CDT does acknowledge that some State Data Center services cannot be provided at comparable or lower rates than private vendors even if rates are reduced to cover only direct costs. In other words, despite the 10 percent reduction in fees, the department’s proposal to temporarily cover some of its indirect administrative costs outside of the rate structure would not make some of the IT services it provides competitively priced.

CDT’s Proposals Provide Little Information About Future Rate Re‑Evaluation Process. The proposals as currently presented to the Legislature are missing key information about the anticipated rate re‑evaluation process. For example, the proposals do not provide any details on the methodology for evaluating State Data Center IT services to reduce rates or on the time line for the process. We were able to obtain some information about the process through our meetings with the administration. We understand from CDT that, as part of its rate re‑evaluation process, the administration plans to assess each State Data Center service to identify efficiencies and reduce costs. Some services might be eliminated based on, for example, current demand from state entities for the service. Other services might be added to complement private vendor service offerings, rather than the State Data Center continuing to offer similar services to private vendors. At the end of the process, the administration might recommend some services be shifted from cost recovery to the General Fund. Based on this information, both the potential impacts of this rate re‑evaluation process on the core services provided to state entities and the anticipated shift of funding for some additional IT services to the General Fund suggest a more active role for the Legislature in its oversight of the process.

Funding Proposals for Three Fiscal Years Limits Legislative Oversight Through Budget Process… Both of these proposals request funding for three fiscal years, starting in 2022‑23, that is based on forecasted revenues from and expenditures on State Data Center services. However, we understand from CDT that it cannot accurately forecast either its revenues from or expenditures on services over a three‑year period because demand can change significantly year over year. By approving funding for three fiscal years, the Legislature would limit its oversight through the annual budget process to (for example) make appropriate budgetary adjustments based on the changing fiscal condition of the TSRF.

…And Legislative Involvement in Rate Re‑Evaluation Process. Multiyear funding of these proposals also would limit legislative involvement in the rate re‑evaluation process. We understand that the administration intends to update the Legislature on this process through CDT’s quarterly legislative briefings. These quarterly briefings likely will cover a wide range of topics from changes in state IT policies and procedures to information security updates to state middle‑mile broadband network developments. These briefings are unlikely to provide the Legislature with the requisite information and time to learn about and be involved in the rate re‑evaluation process. Requests for funding on an annual basis would allow the Legislature to decide whether the administration’s progress on the rate re‑evaluation process warrants additional legislative involvement and/or oversight.

Approve Only One Year of Funding for Both Proposals. We recommend the Legislature approve only budget‑year funding for both proposals and reject requested outyear funding to ensure legislative oversight continues through the annual budget process. Annual funding for these proposals also would allow CDT to better forecast additional net revenue losses, for example, and make associated budget requests to cover them (if necessary). Budget‑year funding to shift some internal administrative costs to the General Fund also would allow the Legislature to evaluate whether the anticipated reduction in State Data Center rates changes state entities’ demand for IT services from CDT.

Direct CDT and DOF to Work With Legislature on Trailer Bill Language to Allow More Legislative Direction and Oversight of the Rate Re‑Evaluation Process. We also recommend the Legislature adopt placeholder trailer bill language that directs CDT and DOF to work with the Legislature to define the rate re‑evaluation process over the next several years and provide oversight. The Legislature could adopt the trailer bill language that is ultimately developed as a means to provide its policy direction to guide the department’s rate re‑evaluation process. We recommend the language include at least the following components: