This brief describes our fiscal outlook for Medi‑Cal, the major factors that we expect to drive changes in General Fund spending in Medi‑Cal, and key uncertainties of our projections. Specifically, this brief concerns projections of Medi‑Cal local assistance spending within the Department of Health Care Services (DHCS).

Estimate Downward Revision for the Current Year. We estimate that Medi‑Cal General Fund spending will be $35.5 billion in 2022‑23, a decline of around $900 million compared to the 2022‑23 Budget Act estimate. This adjustment is driven by the extension of the national COVID‑19 public health emergency (PHE) into January 2023, which (among other impacts) provides Medi‑Cal more federal funding to offset General Fund costs than anticipated at budget act.

Project Net Reduction for the Budget Year. From our estimated level in 2022‑23, we project General Fund spending to decline in 2023‑24 by $1.3 billion to $34.2 billion. Technical adjustments associated with one‑time costs in 2022‑23 largely drive the reduction in spending. The fiscal impact of these technical adjustments is partially offset by a number of upward spending pressures related to the unwinding of the PHE, the end of certain offsetting fund sources, underlying growth in utilization and service costs, and other factors.

Project Longer‑Term Growth. We project Medi‑Cal General Fund spending to increase over the remainder of the outlook period, rising to over $38 billion by 2026‑27. This longer‑term growth primarily is driven by changes in caseload, continued growth in underlying per‑enrollee utilization and service costs, and expanded health coverage for income‑eligible undocumented persons.

Medi‑Cal Provides Health Coverage for Low‑Income Californians. Medi‑Cal, the state’s Medicaid program, provides health care coverage to over 14 million of the state’s low‑income residents. In a typical year, the General Fund covers a little more than 20 percent of total Medi‑Cal costs, with federal funds and other state and local funds respectively covering the remaining 65 percent and 15 percent of total costs.

PHE Notably Impacted Medi‑Cal. The national PHE was first declared in early 2020 and has been extended numerous times. There are a number of temporary policy and financing rule changes within the Medi‑Cal program that generally remain in place for the duration of the PHE. For example, Congress approved a 6.2 percentage point increase in the federal government’s share of cost for most Medicaid services for the duration of the PHE. In addition, the same federal legislation effectively prohibits the state (as a condition of receiving the enhanced federal funding) from terminating the eligibility of current Medi‑Cal enrollees, except in limited circumstances, until after the PHE ends. This prohibition, known as the “continuous coverage requirement,” increases overall Medi‑Cal caseload from what it otherwise would be if the eligibility requirements, such as those pertaining to income, continued to be enforced with respect to the current caseload. The 2022‑23 Budget Act assumed the PHE would expire in October 2022. The federal government later extended the PHE at least into January 2023—thereby extending the enhanced federal funding and the continuous coverage requirement.

Below, we summarize our projected adjustments to the Medi‑Cal budget and describe the major drivers of these changes in the current year (2022‑23), budget year (2023‑24), and longer term (2024‑25 through 2026‑27). Our outlook assumes current laws and policies remain in effect over this period of time.

…Which Will Be Partially Offset by Increased General Fund Costs for Caseload. The savings from the additional months of enhanced federal funding will be partially offset by increased caseload costs resulting from the extension of the continuous coverage requirement. Specifically, we estimate that the extension of the PHE into January 2023 will result in increased spending of $130 million General Fund on caseload costs in 2022‑23. Despite the extension of the continuous coverage requirement, we do not anticipate overall caseload levels to be notably different than what was assumed in the enacted budget. Based on more recent caseload data, we find that slower underlying caseload growth than was assumed in the budget offsets the increase in caseload resulting from the continuous coverage requirement being extended. As a result, our net caseload estimate is similar to the budget act. We do anticipate that there will be changes in the mix of the Medi‑Cal caseload, however, which increases caseload costs. For example, relative to the enacted budget, we estimate increases in the number of seniors enrolled in Medi‑Cal (who typically have higher General Fund costs). We also estimate a decrease in what is commonly referred to as the Patient Protection and Affordable Care Act (ACA) optional expansion population (which typically has lower per‑enrollee General Fund costs).

Outlook Anticipates Overall Spending Decline in 2023‑24. We project Medi‑Cal General Fund spending to be $34.2 billion in 2023‑24—a $1.3 billion decline from our revised 2022‑23 estimate. As Figure 1 shows, this reduction in spending is the net effect of several key downward and upward adjustments. Below, we summarize each adjustment. 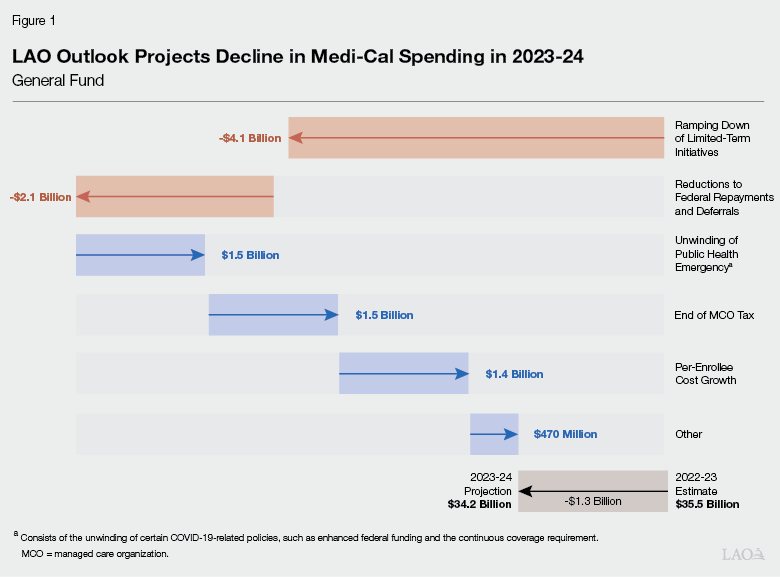 Unwinding of PHE Increases Net General Fund Spending in Budget Year. Assuming the PHE ends in January 2023, we estimate that net General Fund costs will increase by about $1.5 billion in 2023‑24 due to the end of the enhanced federal funding and the unwinding of certain PHE‑related policies. We project that the end of the enhanced federal funding will increase General Fund spending by about $3.1 billion. However, we project that about $1.7 billion of this increase will be offset by a reduction in overall Medi‑Cal costs due to unwinding certain PHE‑related policies. Most notably, once the continuous coverage requirement ends, caseload will decline over the following 14 months. We project that the decline in caseload will reduce spending by about $1.3 billion General Fund in 2023‑24.

End of Managed Care Organization (MCO) Tax Also Increases General Fund Spending. For over a decade and following multiple renewals, the state has imposed a tax on MCOs (managed care health plans that arrange and pay for the services of their beneficiaries) and used the revenues to offset General Fund costs in Medi‑Cal. The current MCO tax has been in place since January 2020 and is scheduled under current law to end in December 2022. We project the end of this tax will increase General Fund spending by $1.5 billion in 2023‑24.

Assume Continued Growth in Per‑Enrollee Costs. Underlying per‑enrollee cost growth in Medi‑Cal is driven by changes in health care utilization and service costs. Under our outlook, we assume per‑enrollee costs increase by $1.4 billion (around 4 percent). This projection assumes Medi‑Cal utilization and costs, as well as their underlying drivers (such as inflation), generally continue to follow past trends.

Various Other Factors Impact General Fund Spending. We expect various other upward and downward spending pressures in Medi‑Cal, with a net impact of about $470 million in 2023‑24 in General Fund spending. Most notably, income‑eligible undocumented residents between the ages of 26 through 49 will be eligible for comprehensive Medi‑Cal services beginning no later than January 1, 2024. Currently, these individuals only are eligible for emergency‑ and pregnancy‑related services. The expansion is expected to cost roughly $630 million General Fund in 2023‑24.

Outlook Anticipates Increases in General Fund Spending. We project Medi‑Cal General Fund spending to increase in the remaining years of the outlook period, rising to more than $38 billion in 2026‑27. Below, we describe the major drivers of this increase in spending.

Assume Caseload Increases for Remainder of Outlook Period. Following the decline in caseload due to eligibility redeterminations that recommence after the PHE ends, we project caseload will increase gradually for the remainder of the outlook period, primarily as a result of demographic and economic factors. More specifically, our outlook assumes that California’s overall population will increase and that unemployment rates over the outlook period will be somewhat higher than in 2022‑23. These demographic and economic factors likely will result in an increase in the number of people who are income‑eligible for Medi‑Cal and do not have access to employer‑sponsored health coverage. As Figure 2 shows, we estimate that most of the associated caseload growth will be concentrated among the ACA optional expansion population, as well as seniors and persons with disabilities. 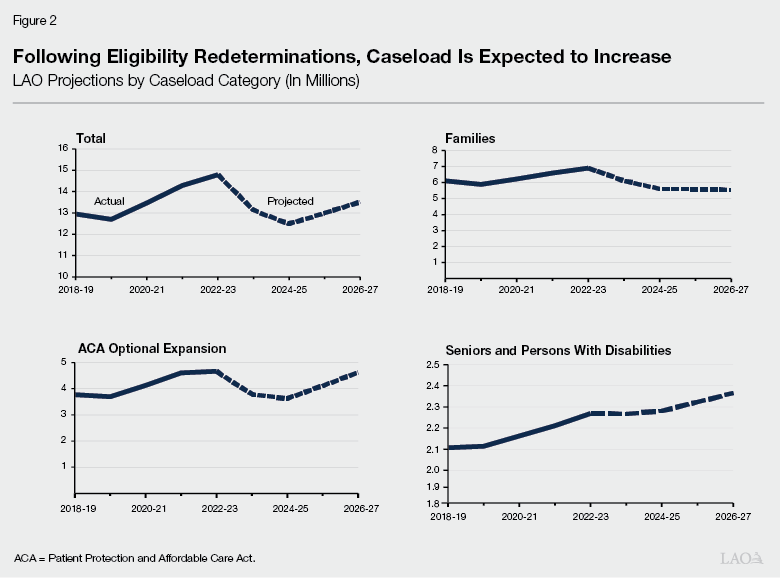 Assume Per‑Enrollee Costs Continue to Rise. We assume that underlying per‑enrollee utilization and service costs continue to rise over the outlook period, with the increase each year ranging from 3 percent to 4 percent. Additionally, our outlook also anticipates overall per‑enrollee costs to increase as seniors and persons with disabilities (a relatively high‑cost group) become a larger share of Medi‑Cal’s overall caseload. We project this group to rise from 15 percent to 18 percent of Medi‑Cal caseload over the outlook period.

General Fund Cost of Eligibility Expansion Will Ramp Up. The General fund costs of expanding eligibility for comprehensive Medi‑Cal services to otherwise income‑eligible undocumented residents between the ages of 26 and 49 are expected to increase substantially after 2023‑24. In 2024‑25, the first full year of the expansion, General Fund costs are expected to be about $1.5 billion. Costs are expected to continue increasing through the outlook period and beyond, reaching over $2 billion General Fund at full implementation in 2028‑29.

Limited‑Term Initiatives Will Continue to Ramp Down. We project another $1 billion in General Fund spending reductions in 2024‑25 associated with limited‑term initiatives. The reductions primarily will be from the winding down of the Behavioral Health Bridge Housing initiative, as well as the end of various other initiatives.

At Time of Outlook, Uncertain End Date of PHE. At the time we completed our outlook, it was uncertain whether the federal government would extend the PHE beyond January 2023. To the extent the PHE is extended beyond January 2023, General Fund spending will differ from our estimates and projections. For example, if the PHE is extended for an additional 90 days (into April 2023), we estimate net General Fund savings for Medi‑Cal in the low hundreds of millions of dollars in 2022‑23 (primarily due to more enhanced federal funding), but project net costs of a similar amount in 2023‑24 (primarily due to the extension of the continuous coverage requirement). We emphasize, however, that these estimates are subject to considerable uncertainty. (Based on the federal government’s commitment to providing at least a 60‑day notice before the end of the PHE, such notice would need to have been provided by November 12, 2022. Since no such notice has been provided as of the time of this publication, we now expect the PHE to be extended beyond January 2023.)

Demographic and Employment Trends Could Vary From Assumptions. As discussed earlier, following the decline in caseload due to eligibility redeterminations, we project the Medi‑Cal caseload and associated costs to rise beginning in 2024‑25. These increases are primarily a result of our assumptions about demographic and economic trends such as population growth and the unemployment rate. Should the future unfold differently than we have assumed, caseload and associated General Fund costs could be higher, lower, or more volatile than we project.

Overall Impact of Upcoming Policy Changes Is Difficult to Quantify. The state recently adopted a series of major changes to the way Medi‑Cal services are delivered and paid. Some of these changes have been implemented, whereas other changes are scheduled to begin during the outlook period. Generally, our outlook assumes these enacted policy changes go into effect, though in some cases we were not able to fully quantify their fiscal impact. For example, over the outlook period, DHCS plans to implement a number of changes affecting managed care health plans in Medi‑Cal, including which plans will participate in Medi‑Cal and how their rates will be set. Depending how these changes impact service costs, utilization, and quality, they could, on net, increase or reduce overall General Fund Medi‑Cal spending. In addition, many of these policy changes are interrelated, further adding to the uncertainty.

Inflation and Its Impacts on Medi‑Cal Spending Are Uncertain. Inflation in the overall state economy has been considerably higher over the last several months than average historical levels. Factors that tend to predict future inflation suggest there is a considerable risk inflation will remain elevated for an extended period of time. Should inflation continue to be higher than historical levels, General Fund spending in Medi‑Cal could be higher than we project. The extent of this impact on Medi‑Cal’s budget, however, is uncertain. Some key components of Medi‑Cal’s budget—such as managed care spending—are adjusted over time to account for factors such as inflation. In contrast, other key components—such as fee‑for‑service payments to providers—are not.