What Do Unanticipated Revenues Mean for the Surplus?

In our new monthly revenue outlook posts, we offer our assessment of how much current year revenues could differ from budget projections based on recent cash and economic data. An important consideration for interpreting our monthly revenue outlook is that the new, unanticipated revenues do not result in a dollar-for-dollar increase in the state’s surplus. Instead, on average, and additional $1 of unanticipated revenues can result in about $0.40 of additional surplus, as a result of the state’s constitutional requirements to allocate revenues to specific uses. (As we discuss below, this ratio can vary substantially depending on specific conditions. Also, we focus on the concept of a surplus here since our recent cash posts have shown revenues are exceeding expectations. However, revenue declines generally would imply the state could have a budget problem.)

What Is a Surplus? A surplus occurs when the state has more resources available for the upcoming year (usually, from revenues) than existing commitments (usually, for spending). Typically our office has defined the surplus to mean the revenues available after the state’s constitutional and current law requirements are met. When the state has a surplus, the Legislature has additional discretionary resources to allocate in the budget process.

How Do Higher Revenues Affect the Surplus? When revenues exceed expectations over the course of a fiscal year—as our recent cash post indicates is likely to be the case in 2021-22—it usually means the state will have a surplus in the upcoming budget process. However, each dollar of additional revenues above expectations results in less than one additional dollar of surplus. That is because the state has two constitutional budget formulas that require certain types of spending based on revenue performance. They are:

As Figure 1 shows, before considering other spending, each additional $1 of revenue will most likely result in an increase of $0.40 of additional surplus, although it can be as high as $0.60 or as low as $0.10 (or even lower), depending on a number of specific conditions, such as stock market performance and school enrollment. 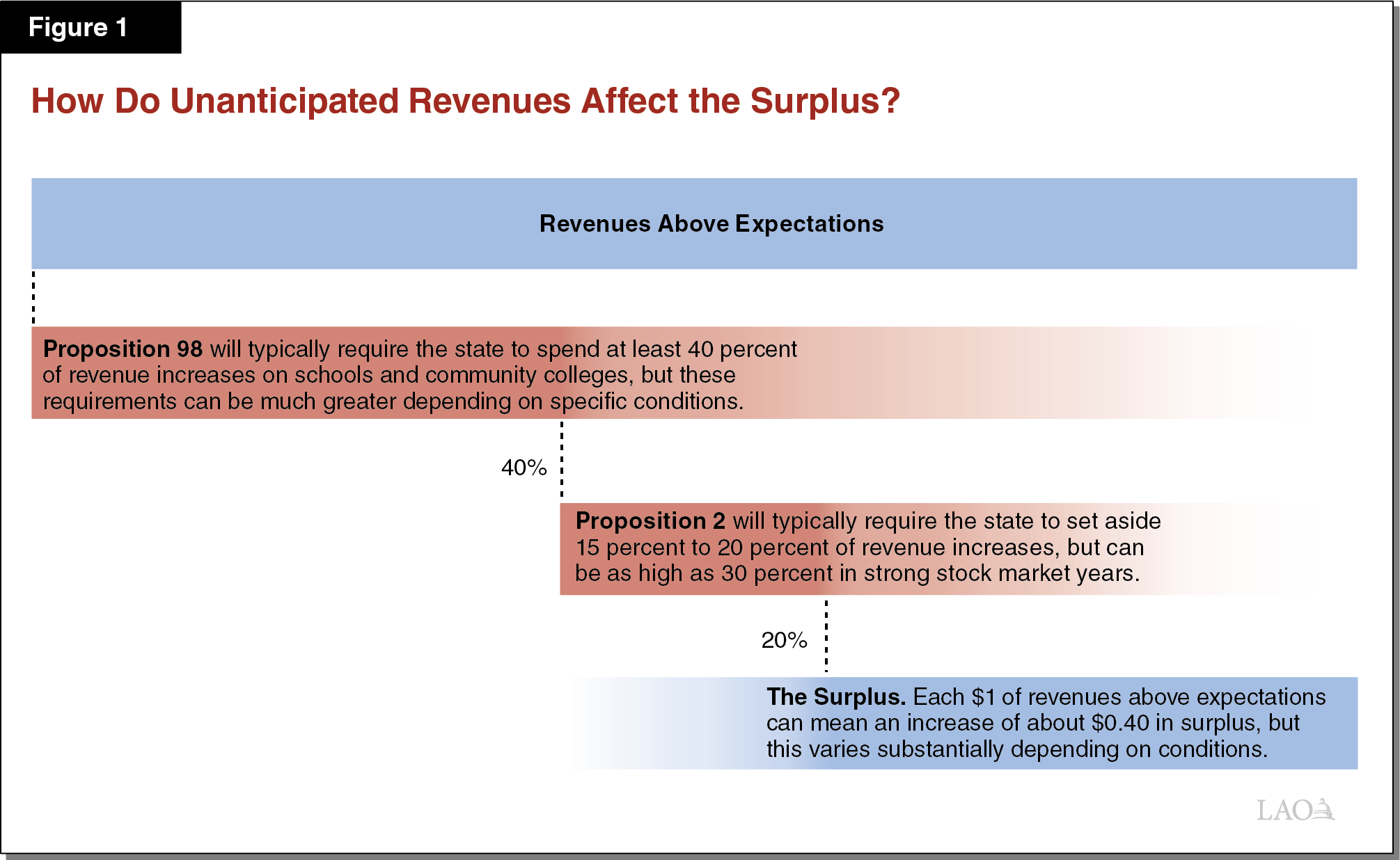 What Else Can Affect the Surplus? Revenue collections and revenue-driven spending are not the only factors affecting the size of the surplus. The surplus can also be higher or lower depending on: federal spending and federal reimbursements, for example, for disaster costs; caseload-driven costs, for example in health and human services programs; other price and utilization costs, for example pharmaceutical costs; and other operational costs, like spending to maintain health and safety on state property. In addition, this post only discusses revenues for the current year (2021-22). Estimates of revenue and expenditure growth for the budget year (2022-23) also will play a very important role in any possible surplus in next year’s budget process. Finally, the state has to meet the constitutional requirements of the State Appropriations Limit, which does not limit the size of the surplus, but could restrict the uses of the surplus to certain types of spending or revenue reductions.

When Do We Know How Big the Surplus Will Be? The Department of Finance estimates the condition of the state budget in support of the Governor’s Budget (released in January), the May Revision (released in May), and the final budget act (released in June or July). In the course of presenting the Governor’s proposals, the DOF begins its process by estimating the budget condition. At these points, our office produces estimates of the available surplus under the administration’s revenue estimates. In May, we also produce our own revenue estimates with a different estimate of the available surplus or budget problem, assuming the Governor is successful in enacting his May Revision proposals. In addition, prior to the Governor’s Budget, our office releases the Fiscal Outlook each November. This report includes our own independent assessment of the size of the surplus (or budget problem) for the upcoming fiscal year, assuming current laws and policies are extended. That report will be the next time we formally update the budget condition and provide our assessment of whether or not the state will have a surplus to allocate in 2022-23.