The Governor’s budget proposes $500 million from the General Fund to address deferred maintenance backlogs in state facilities managed by various departments. The Governor’s budget proposal does not identify the specific projects the departments would undertake with the proposed funding. Instead, it requires that project lists be provided to the Joint Legislative Budget Committee (JLBC) prior to the allocation of the funds.

Deferred Maintenance Funding Provided in 2015–16. As shown in Figure 2, the 2015–16 Budget Act included Control Section 6.10, which provided $120 million in one–time, non–Proposition 98 General Fund support for addressing deferred maintenance in various departments. The 2015–16 Budget Act also provided $148 million in Proposition 98 funds for deferred maintenance projects and certain other one–time purposes at the California Community Colleges (CCC), and Chapter 1 of 2015 (AB 91, Committee on Budget) provided $2 million from the General Fund for deferred maintenance at the California Department of Forestry and Fire Protection (CalFire).

As proposed by the Governor, Control Section 6.10 of the 2015–16 Budget Act did not identify the specific projects that departments would undertake with the proposed funding. Instead, the budget required that for each entity receiving deferred maintenance funds, the Department of Finance (DOF) provide a list of projects to the JLBC 30 days prior to allocating those funds. The budget further required DOF to notify the JLBC quarterly of any changes to the approved list of projects. The budget also specified that expenditures must be made by June 30, 2017. In July 2015, the administration officially provided a list of projects to be funded from Control Section 6.10. Since then, the administration has notified the JLBC of several changes to the projects proposed for funding.

$500 Million for Deferred Maintenance. The Governor’s budget proposes Control Section 6.10, which provides $500 million in non–Proposition 98 General Fund to various entities for deferred maintenance as shown in Figure 3. (The Governor’s budget also includes $289 million from Proposition 98 funds for CCC for deferred maintenance and certain other one–time expenses, as well as $18 million from the Motor Vehicle Account for deferred maintenance needs at the California Highway Patrol and Department of Motor Vehicles.) Consistent with the Governor’s approach in 2015–16, the proposed 2016–17 budget does not identify the specific projects that departments would undertake with the proposed funding. Instead, the budget requires DOF to provide a list of projects to the JLBC 30 days prior to allocating funds to a department. Subsequent to the allocation of funds, departments may change their list of projects subject to approval by DOF. The budget requires DOF to notify the JLBC quarterly of these changes, but does not provide the JLBC with a 30–day review period.

We find that the deferred maintenance funding provided in 2015–16 was a good first step towards addressing the state’s substantial accumulated backlog of deferred maintenance. Furthermore, we find that the additional, substantially larger, amount of deferred maintenance funding proposed for 2016–17 represents another important contribution towards addressing this large backlog. The state has invested many billions of dollars in its infrastructure assets, which play critical roles in the state’s economy. Moreover, when repairs to key building and infrastructure components are put off, facilities can eventually require more expensive investments, such as emergency repairs (when systems break down), capital improvements (such as major rehabilitation), or replacement. Thus, while deferring annual maintenance lowers costs in the short run, it often results in substantial costs in the long run.

Limited Information on Proposed Projects. The administration has identified projects that make up each department’s list of deferred maintenance needs. However, the administration has not provided lists of specific projects that are proposed for funding under Control Section 6.10. The absence of an identification of specific projects makes it difficult for the Legislature to evaluate whether projects will address the highest state priorities. For example, the Legislature may wish to prioritize funding certain types of projects—such as those that address fire, life, and safety issues or reduce future state costs—over other types of projects—such as those that address aesthetic concerns or that could potentially be funded through other sources. However, without lists of specific projects, the Legislature cannot assess whether the funding provided will go to projects that meet those or other legislative priorities.

No Clear Methodology for Establishing Funding Levels. We find that the administration has not provided a clear rationale for why the proposed funding levels were selected. Based on our discussions with the administration, we understand that they considered various factors when allocating deferred maintenance funding to departments, such as the amount of departments’ identified needs and the amount of funding provided to departments in 2015–16. However, it is not clear how these and other considerations were ultimately weighed to arrive at the proposed funding amounts for departments. We note, for example, that the proposal includes sufficient funding to cover all of the identified needs at several departments, such as the Department of Food and Agriculture, the California Conservation Corps, and the State Conservancies. In contrast, the proposal funds about 5 percent of the needs identified by the Department of Parks and Recreation and California Department of Corrections and Rehabilitation. Differing funding levels may make sense to the extent they reflect differing levels of need, severity of need, or priorities. However, the Governor’s proposal does not provide such clear justification. In fact, based on the list of each department’s identified needs as provided by the administration, it appears the budgeted funding levels would be sufficient to fund some very low priorities in some departments—such as new carpets and interior painting at the California Conservation Corps—while other departments might have fire, life, and safety projects and projects that maintain the integrity and longevity of buildings unfunded.

Lack of Analysis of Other Potential Funding Sources. It is unclear whether some projects identified by the administration as deferred maintenance needs could be funded by other sources rather than the General Fund—such as user fees, federal funds, or donations. For example, energy efficiency projects identified as deferred maintenance needs by some departments such as the Office of Emergency Services and the Department of Veterans Affairs might be able to be funded by cap–and–trade auction revenues or various state revolving fund programs (where project costs are recouped over time through the project’s energy savings). 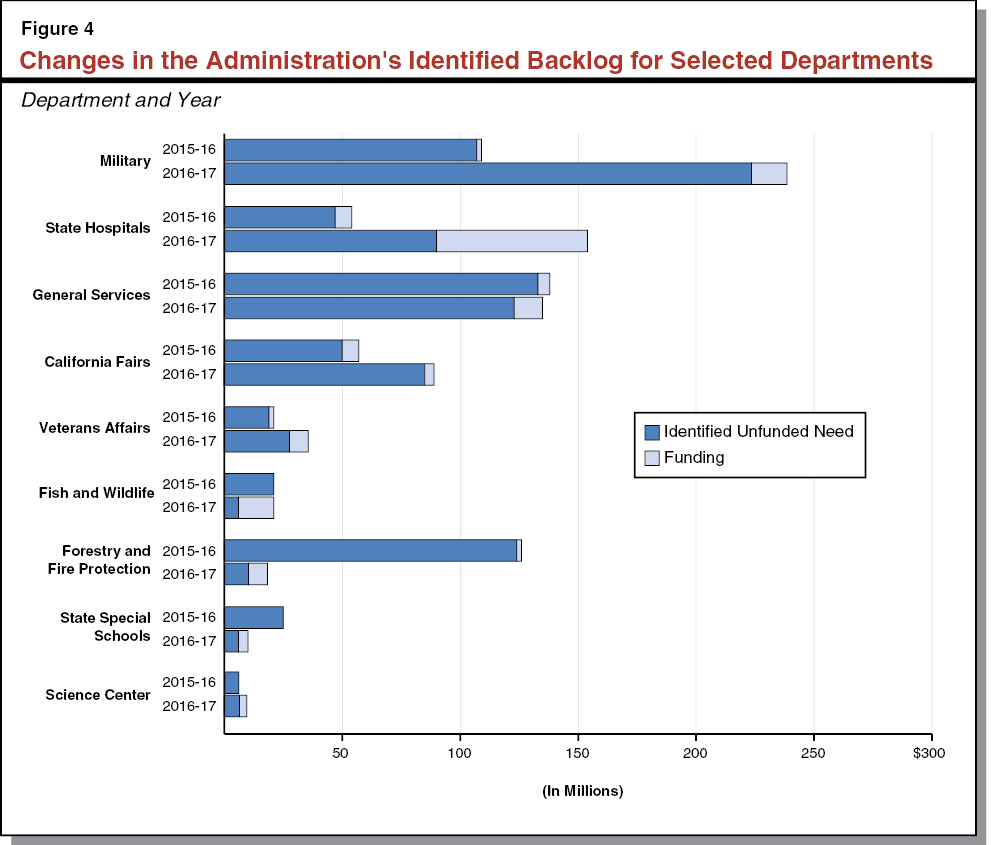 In many cases, it is unclear what drove these substantial changes in the identified backlogs. Specifically, it is uncertain whether these changes reflect actual differences in needs since last year or are a result of differences in how deferred maintenance is catalogued or reported by departments. It is important to understand what is leading to these—in some cases very large—changes to identified backlogs because it may point to different legislative responses. To the extent that changes in backlogs represent actual differences in accumulated needs since last year, they can provide useful information on how much departments’ current maintenance programs are affecting backlogs. For example, if a department experienced a large increase in its backlog since last year, it might suggest that its routine maintenance activities are insufficient to keep up with its annual needs and that it should improve its maintenance program to prevent the further accumulation of deferred maintenance. However, to the extent that the changes in reported need levels are a result of differences in reporting methodologies, the information on these reported backlogs might not be sufficiently reliable to inform decision making about how to most appropriately address a department’s deferred maintenance challenges and might instead point to the importance of improved facility condition assessments or other data collection.

Plan Does Not Address Causes of Deferred Maintenance

Notification Process for Projects Is Inadequate

As discussed above, the Governor’s proposal does not require the identification of specific projects prior to passage of the budget or prior to changing the approved project lists. Instead, Control Section 6.10 includes a JLBC notification process. This approach raises a few concerns. First, the process would identify projects proposed for funding after the Legislature has made its decisions on the budget. This would divorce decision making on the amount of funding provided to each department from the set of projects to be funded. As a result, the funding amounts might not correspond with the projects that would be prioritized by the Legislature. Second, the proposed JLBC process provides the Legislature with much less time to review proposed projects than the traditional budget process and is less transparent to the public. For this reason, the JLBC process is typically reserved for minor, midyear changes to the budget rather than for the initial identification of projects proposed for funding. Third, the proposed process to allow the administration to move forward with changes to funded projects without legislative approval would diminish the Legislature’s control over how funds are spent and could result in the funding of projects that are not consistent with legislative priorities.

The 2015–16 process highlights some of the challenges associated with the administration’s proposed approach. Specifically, one of the projects that the administration proposed to fund under Control Section 6.10 of the 2015–16 Budget Act—the replacement or retrofitting of the existing boilers at Porterville Developmental Center—had previously been rejected by the Legislature. While the administration ultimately did not move forward with this project after the JLBC expressed concerns, the Control Section 6.10 process—with its lack of time for review and more limited transparency—made it more challenging to ensure that this type of project was identified and removed from the administration’s plan for funding. Furthermore, if this project had been proposed to replace an approved project (rather than being included on the initial list of projects), the administration would not have been required to provide the Legislature with any opportunity to review the change prior to proceeding with the project.

Require Lists of Proposed Projects. We recommend that the Legislature require the administration to provide lists of specific projects that would be funded by each department. These lists are critical for the Legislature to have in order to assess whether the proposed projects are consistent with its priorities and whether the funding allocations are appropriate. In order to enable the Legislature to consider the lists during its budget deliberations, we recommend the administration provide the required information by April 1, 2016.

Adjust Funding Levels Based on Review of Project Lists