The Department of General Services (DGS) provides a variety of services to state departments, such as procurement, management of state-owned and leased real estate, management of the state’s vehicle fleet, printing, administrative hearings, legal services, development of building standards, and oversight over school construction. The department generally funds its operations through fees charged to client departments. The Governor’s budget proposes $1.1 billion from various funds for support of DGS in 2016-17. This is an increase of $19 million, or about 2 percent, from current-year estimated expenditures. In addition, we note that the Governor’s budget also includes a $1.5 billion state office building proposal. (For more information on this proposal, please see our report The 2016-17 Budget: The Governor’s State Office Building Proposal.)

LAO Bottom Line. We recommend rejecting the Governor’s proposal to provide $1.7 million in lease revenue bonds to construct a system to store, treat, and transport water used in the Central Plant for reuse irrigating Capitol Park. The proposal does not appear to be a cost-effective strategy for reducing state water use.

Central Plant Renovation Project. The Central Plant provides chilled water and steam to cool and heat various state buildings in downtown Sacramento. In 2003-04, the Legislature approved $214 million in lease revenue bond funds to replace the state’s 1960s-era Central Plant in Sacramento with a larger, more modern, and more efficient facility. The project also included the construction of a new thermal energy storage tank, new cooling towers, and a new steam turbine distributed generation system. The project is now essentially complete, and the administration estimates that there will be an estimated project savings of $2.7 million.

The Governor proposes using $1.7 million in lease revenue bonds from the anticipated project savings from the Central Plant Renovation Project to construct a system to store, treat, and transport water used in the Central Plant for reuse irrigating Capitol Park. The project would save an estimated 5.6 million gallons of water per year by reusing Central Plant water that would otherwise be discharged into the sewer system. These water savings represent about 30 percent of annual Capital Park water usage based on the current amount of water used by the Central Plant.

Project Does Not Appear to Be Cost-Effective. We find that water conservation is a worthy state goal. However, the administration has not justified that the proposed project is a cost-effective method for reducing state water use. Furthermore, we find that there are a variety of potential water-saving projects that might be more cost-effective at reducing water use than the proposed project, such as water fixture replacements and turf removal projects.

Another method for evaluating the cost-effectiveness of water conservation projects is to consider the number of years the project must be in operation in order to repay the costs of the project (otherwise known as the payback period). Based on updated information provided by the department, the project is expected to result in annual net savings of just over $10,000 given current operations of the Central Plant. These net savings account for savings from (1) purchasing less water to irrigate Capitol Park, and (2) lower fees associated with discharging less water from the Central Plant into the sewer system, offset by increased operational costs associated with treating and pumping water from the Central Plant to Capitol Park. When compared to the $1.7 million cost of the project, DGS estimates that the payback period for the proposed project would be 166 years, which is an unusually long repayment period. (The payback period would fall to an estimated 88 years if the Central Plant were used at its maximum capacity.) By contrast, recently funded water savings projects at state buildings have payback periods that average about 30 years.

Reject Proposal. We recommend that the Legislature reject the Governor’s proposal to construct a system to store, treat, and transport water used in the Central Plant for reuse irrigating Capitol Park. Instead, we recommend using the project savings to defease bonds (thus freeing up the General Fund dollars that would be used to pay debt service under this proposal) or for other eligible projects.

Transfer of the Government Claims Program to DGS

LAO Bottom Line: We recommend the Legislature approve the Governor’s proposal to transfer the state’s Government Claims Program (GCP) from the Victim Compensation and Government Claims Board (VCGCB) to DGS. However, we recommend rejecting the Governor’s proposed funding structure for the program, which would eliminate specific charges made to departments that appear to be effective at limiting the number of claims by incentivizing departments to improve their operations.

Overview of GCP. The GCP, administered by VCGCB, processes claims for money or damages against the state. Generally, anyone who wishes to file a lawsuit against the state or its employees must first go through the process administered under this program. In these cases, litigation against the state can only move forward to the courts if the board denies a claim. This process was established to allow the state to avoid litigation costs. In recent years, the program has processed roughly 7,000 claims annually.

Filing Fees and Departmental Charges. As part of the 2004-05 budget package, the Legislature authorized a fee-based funding structure for the GCP. Specifically, the program began charging a $25 filing fee to the individual or company submitting each claim against the state. The program also began charging state departments for all claims that the board approves by applying a charge of up to 15 percent of the dollar value on all approved claims. The practice of charging departments for approved claims was established to incentivize departments to better manage their contracts to avoid having disputes that must be handled by the GCP. The revenues resulting from the filing fee and departmental charges are used to fund the staff who administer the GCP.

2015-16 Budget Backfilled GCP With Statewide Surcharge. The 2015-16 budget provided a total of $1.3 million and nine positions to the VCGCB to support the GCP. However, the revenue from the program’s financing structure—the filing fee and the charges on departments—was estimated to generate only about $700,000. As a result, $634,000 in revenues from the statewide surcharge administered by DGS was approved for GCP in order to fully support the proposed level of resources for 2015-16. The statewide surcharge is a fee that DGS assesses on all state departments based on their staffing levels. It is intended to provide an equitable method for DGS to recover costs that are not connected to specific services received by individual client departments. Currently, the surcharge generates about $35 million per year.

Shift GCP to DGS. The Governor’s budget proposes to shift the GCP from VCGCB to DGS. As part of this shift, the budget transfers nine positions and $1.2 million in funding authority to DGS. The administration also proposes budget trailer legislation to make conforming statutory changes related to moving the program to DGS.

Restructure Funding for GCP. The Governor’s budget proposes to retain the existing $25 filing fee—which generates about $90,000 annually—but to eliminate the charge on departments of up to 15 percent of approved claims. The administration indicates that it proposes retaining the $25 fee to discourage individuals from filing claims that are without merit. However, the administration indicates that it would eliminate the 15 percent charge on departments because it does not believe that it incentivizes a reduction in claims, and it also finds the charge to be administratively burdensome. The budget would fund the remaining portion of the costs related to the GCP that are not covered by the filing fee—about $1.1 million annually—from the statewide surcharge. We estimate that this would result in an increase to the statewide surcharge of about 1.5 percent compared to the level of the surcharge in 2015-16 (which included partial funding for the GCP).

Program Shift to DGS Is Reasonable. We find that shifting the GCP to DGS is reasonable. This is because the GCP provides administrative services to state departments that are similar to those already provided by DGS. Furthermore, this shift would enable VCGCB to focus on victim-related issues. (We recommended restructuring VCGCB to focus solely on victim services in our March 2015 report The 2015-16 Budget: Improving State Programs for Crime Victims.)

Existing Government Claims Funding Structure Appears Successful. The existing funding structure for the GCP was established to create incentives for departments to better manage their contracts and settle issues on their own. Based on the limited data available, the incentive model for the program appears to have been successful at reducing the number of claims that are made against the state. For example, prior to the establishment of the funding structure, VCGCB received an average of 9,900 claims annually. As shown in Figure 1, claims have decreased to an average of 7,000 annually, a 29 percent decline, since 2005-06 after the current funding structure was implemented. Additionally, the number of claims approved by VCGCB dropped from about 1,300 annually in the two years before 2004-05 (prior to the implementation of the filing fee and departmental charges) to an average of 900 since then, a 30 percent decline. The decrease in both claims that were filed and claims allowed following the change in the GCP funding structure provides suggestive evidence that the funding structure may be incentivizing departments to adopt practices to reduce the number of claims generated against them (such as good contract management). By eliminating the existing charges to departments, the proposal would likely reduce the associated incentives that appear to be effective. 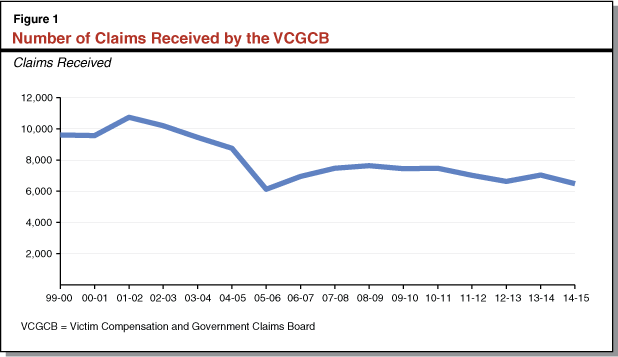 Approve Proposed Program Shift to DGS. We recommend that the Legislature approve the Governor’s proposal to shift the GCP from VCGCB to DGS. The GCP is consistent with other types of services that DGS provides to departments, so it is reasonable for the department to undertake these additional activities. Additionally, the shift of GCP responsibilities to DGS will allow VCGCB to focus on the core mission of serving victims.

Reject Governor’s Proposed Funding Structure. The existing funding structure—including both the filing fee and the charges on departments—appears to be effective at limiting the number of claims by incentivizing departments to improve their operations. Accordingly, we recommend that the Legislature reject the Governor’s proposal to eliminate the program’s charges on departments and fund the program only from the statewide surcharge and filing fees. Instead, we recommend that the Legislature approve a funding structure similar to 2015-16 that utilizes charges to departments and filing fees and is supplemented by the DGS statewide surcharge, as necessary.