Unprecedented Amount of Bond Funds Approved in 2006. In November 2006, voters approved over $42 billion in bonds for the following major infrastructure-related purposes: transportation (Proposition 1B), housing (Proposition 1C), K-12 and higher education (Proposition 1D), flood control (Proposition 1E), and natural resources (Proposition 84). As shown in Figure 1, the 2006 election was the biggest single approval of bonds in state history—close to twice the size of the next largest year (2002). With the exception of Proposition 84—which was placed on the ballot through the initiative process—these bonds were placed on the ballot by the Legislature. In some cases, the Legislature expressed its desire for these funds to be spent within about a decade. For example, Propositions 1B and 1C included language expressing legislative intent that those bonds be spent over the next decade. Additionally, the Legislature included a requirement in Proposition 1E that all the funds be appropriated by the Legislature within a ten-year period. 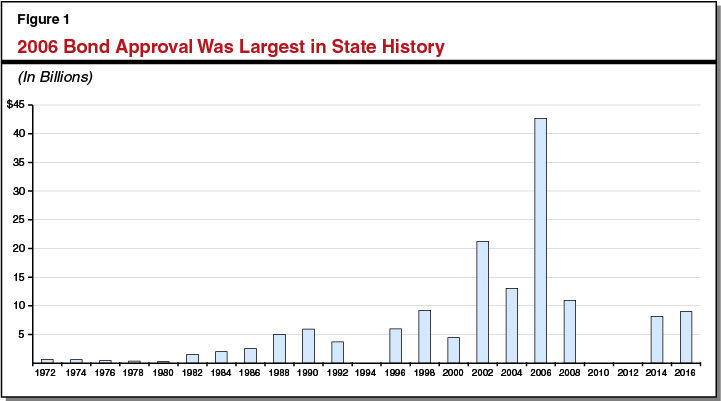 Ten Years Later, Most Funds Have Been Provided to Projects, but Billions Still Unspent. As of November 2016, it has been ten years since voters approved the 2006 bonds. At this significant milestone, the Legislature and other key stakeholders might assume that the state has fully spent the 2006 bonds. In fact, as shown in Figure 2, state agencies administering these bonds have expended about $36 billion—84 percent—of the total amount authorized. Notably, there is significant variation among the six bonds in the pace of expenditures. For example, the state has spent over 95 percent of Proposition 1D education bonds, but only about 60 percent of Proposition 1E flood and Proposition 84 resources bonds. We note for the purposes of this post, we assume that bond funds are spent close to when bonds are sold, since that is typically how the state tries to manage bonds.

Variety of Reasons Some Expenditures Are Lagging. The design characteristics of bond measures as well as various other factors can affect how long it takes for bonds to be expended. Based on our discussions with administering agencies and other stakeholders, we identify some of these major factors below.

Quick Expenditures Are Often Expected and Can Be Desirable . . . There is often strong interest in providing bond funds quickly, as reflected in the language of some of the 2006 bonds. Additionally, there are some policy rationales for distributing bond funds expeditiously. Bonds are approved for infrastructure improvements or expansions that are a public priority. Additionally, infrastructure demands can change over time. However, the state generally has limited ability to change the purpose of how bond funds are spent without voter approval. Thus, lengthy delays in expending bond funds can mean that those expenditures might reflect outdated, rather than current, priorities.

. . . But Slow Bond Expenditures Not Always Problematic. Given the intent language of some of the 2006 bonds, some might expect all of the bonds approved in 2006 would have been sold by now. However, as described above, the history of the November 2006 bonds highlights that there are a number of reasons for lags in selling bonds that are not necessarily problematic or within the control of state agencies. Specifically, in some cases, these lags reflected: (1) the design characteristics of the bonds and the programs within them, such as a focus on new programs; (2) a deliberate approach to administering bonds, such as providing multiple competitive funding rounds; and (3) factors largely outside of the state’s control, such as the broad economic downturn in the late 2000s.

Lessons for Crafting Future Bonds. The factors that led to lags in expenditure of bonds in 2006 could apply to future bonds as well. Accordingly, if crafters of future bonds prioritize quick expenditure of funds, they could consider whether there are opportunities to deemphasize the characteristics that are associated with slow expenditures without trading off other key priorities, such as ensuring that dollars go to the most worthy and cost-effective projects. For example, in some cases, there might be opportunities to fund existing programs rather than create new programs to expedite bond expenditures. We note that, in other cases, it may be less feasible to design bonds to go out quickly without affecting other priorities. For instance, if a bond were to require a lower than typical financial contribution from local and federal governments, this could result in the state funding fewer projects overall than if those other entities were contributing as much to the projects’ costs.