Initial Comments on the Governor's
May Revision

Figure 2 shows the major General Fund changes between the Governor’s Budget released in January and the May Revision, and their impact on the state’s bottom line. Below, we describe the major components of these changes.

Major General Fund Changes Between Governor’s Budget and May Revision

Revenues and Transfers (Excluding BSA Deposit) Up $2.4 Billion Since January. Relative to January, the administration estimates that revenues associated with the “Big Three” state taxes are up $2.1 billion across 2015-16, 2016-17, and 2017-18 combined. This increase is largely attributable to a $3.1 billion increase in 2017-18 personal income tax (PIT) revenues, the state’s largest revenue source. Across the three fiscal years, the administration also increases its estimate of corporate tax revenues by nearly $400 million. These increases are partially offset by declines in the estimates of sales and use tax revenues, which are down $1.2 billion across the three years relative to the administration’s January estimates. Other revenues and transfers account for the remainder of the $2.4 billion increase in revenues and transfers (excluding the BSA deposit).

Required Reserve Deposits and Debt Payments Up $1.2 Billion. Proposition 2 requires the state to make minimum annual deposits into the BSA and minimum annual payments toward certain eligible debts. Largely as a result of higher revenue estimates, particularly those associated with capital gains, the administration’s estimate of these combined requirements are $1.2 billion higher in the May Revision compared to the Governor’s budget. This includes an increase in the required reserve deposit for 2017-18 of $619 million and an equal increase in required debt payments for the same year.

Required and Discretionary Spending on Schools and Community Colleges Up $2.2 Billion. Proposition 98 determines the minimum amount the state must spend on schools and community colleges each year. This minimum amount is funded by a combination of General Fund revenues and local property taxes. Relative to January, estimates of local property tax revenues have declined by a combined $664 million across the three fiscal years, resulting in an equal and offsetting required increase in General Fund spending. In addition to these required spending increases, the Governor proposes appropriating more funding to schools and colleges than is required by the constitutional minimum funding level. Across the three fiscal years, these discretionary increases total $1.6 billion, resulting in a total increase for schools and community colleges of $2.2 billion, over the period.

Baseline Changes to Health and Human Services (HHS) Costs of $1.3 Billion. Compared to January, the administration’s estimates of baseline HHS spending (which reflects budgetary changes from caseload and other factors) is down $1.3 billion across the three fiscal years. The largest component of this decrease is a $620 million reduction in Medi-Cal costs in 2016-17 and a $536 million reduction in 2017-18. These declines are generally attributable to savings from drug rebates in managed care, retroactive managed care rate adjustments, slower caseload growth, and the timing of certain payments that affect annual spending. In other programs, estimated costs associated with the In-Home Supportive Services (IHSS) program are down about $100 million due to lower costs for provider travel time. For SSI/SSP, the cash assistance program for low-income persons who are elderly, blind, or disabled, reductions in estimated caseload and average costs per case reduce estimated spending by $71 million.

Governor Proposes $514 Million in Other Discretionary Expenditure Changes. In the May Revision, the Governor also includes some other new discretionary General Fund expenditure changes. The largest of these is $400 million in assistance to counties to offset some of their cost increases associated with the termination of the Coordinated Care Initiative (CCI). The Governor also proposes a $63 million drought package, which represents a decrease in funding of $115 million relative to January. Other budget proposals include increases in rates for child care providers, a proposal to provide healthcare coverage to newly qualified immigrants, and new infrastructure spending for prisons.

Supplemental Payment for State Pensions. The administration proposes making an additional payment of $6 billion to reduce the unfunded liability of CalPERS, the pension system for retired state employees. This payment would be funded by a loan from the state’s portion of the Surplus Money Investment Fund, which is a part of the state’s short-term savings account. The General Fund would repay its portion of the loan through future required debt payments under Proposition 2.

Changes State and County IHSS Cost-Sharing Structure. The January budget reflected the Director of Finance’s determination that the CCI is not cost-effective, thereby terminating the program under its “poison pill” provisions. As a result, several CCI policies would become inoperative under current law. The May Revision includes proposals to address these changes, including a proposal to change the state and county cost sharing structure in the IHSS program. The Governor also proposes providing state support to assist with the implementation of the new cost-sharing arrangement. In the proposal, this state support would decrease over time.

Governor Focuses on Schools and Community Colleges in Allocating Additional Discretionary Resources. The administration’s higher estimates of revenues and, on net, lower baseline expenditures together mean the Governor had about $2.1 billion in additional discretionary resources to allocate in the May Revision. Figure 3 shows the key choices the Governor made in allocating these resources. The Governor allocates the majority toward additional discretionary spending for schools and community colleges. As it finalizes the budget package, the Legislature can apply its own priorities in allocating these resources for reserves and budget commitments. 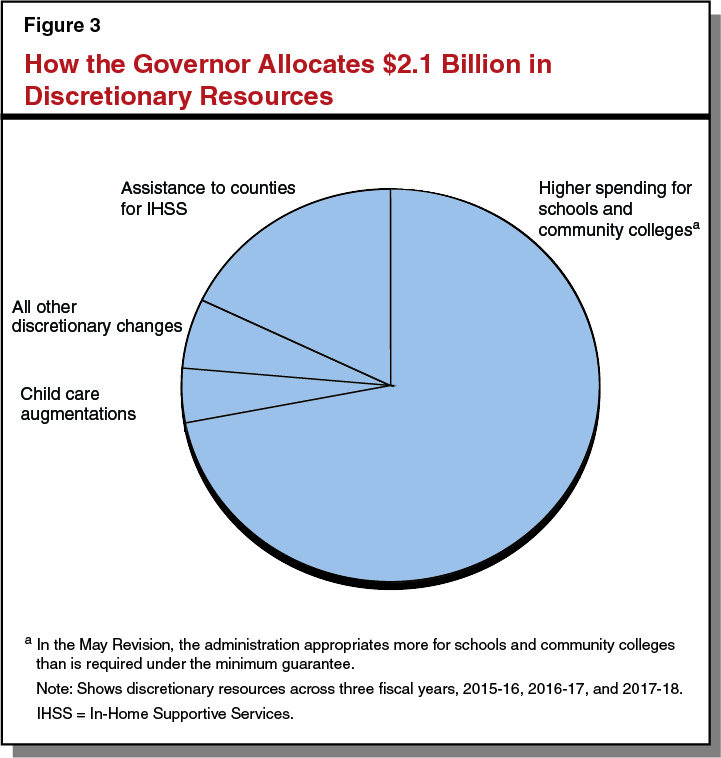 Leaves In Place Some January Budget-Balancing Proposals. In preparing the budget in January, the administration concluded that, absent new budget-balancing actions, the state would face a budget deficit. In January, the administration proposed a variety of actions to address this problem. As discussed earlier, the administration’s estimates of resources available are now higher. While the Governor proposes undoing some of the budget actions proposed in January, he leaves several reductions in place. These include, for example, the elimination of $400 million in affordable housing funding, cancelling a scheduled transfer of $300 million to support future construction and maintenance of state office buildings, a phase-out of Middle Class Scholarships, and a variety of other, smaller spending reductions in health and human services and other programs.

Borrowing Plan to Fund CalPERS Promising. The Governor’s proposes borrowing $6 billion from the state investment pool—an account that invests money from the state and local governments—and use this money to pay down a small portion of state pension liabilities. We think this plan has promise. Typically, accelerated payments to the pension fund would reduce the state’s pension costs over the long term (that is, decades). The extent to which this would occur, however, depends on many factors, including the performance of the stock market (both our office and the administration’s economic projections assume that stock prices stagnate over the next few years). While reducing state liabilities is a laudable goal, using money borrowed from the investment pool for this purpose is a very new idea. Although the state has borrowed funds from the investment pool in the past—typically to cover cash flow needs during economic downturns—the Governor’s proposal is a significant deviation from past practice in the size, timing, and purpose of this type of borrowing.

Consider Waiting to Finalize CalPERS Borrowing Plan. Introducing a proposal like this in May puts the Legislature in a difficult position. The specifics of this plan could affect the degree to which state General Fund and special funds benefit. In our view, it is unlikely that all of these specifics can be reviewed satisfactorily prior to the June 15 budget deadline. One option for the Legislature is to "pencil in" the CalPERS funding plan in its Proposition 2 budget allocations in the budget act, but wait to finalize implementing legislation later in this session. Such an approach would allow the Legislature time to ensure the plan works and fully maximizes its potential benefit for the state.

Governor’s IHSS Proposal Very Complex. The newly proposed cost-sharing structure for county and state IHSS costs adds additional complexity to the already labyrinthine 1991 realignment fiscal structure. Moreover, some conceptual elements of the proposal have yet to be finalized. Some of these elements could affect overall costs for counties and the state in future years. While the proposal accomplishes two county priorities—making counties’ costs relatively predictable and generally aligning counties’ costs with available revenues—there may be simpler ways to accomplish these goals. We will be releasing a more detailed analysis of the Governor’s IHSS proposal in a separate analysis. This analysis will raise questions and issues the Legislature may want to consider as the budget package is finalized.

Continued Uncertainty at the Federal Level. Like the Governor’s Budget, the May Revision continues to assume there are no major changes in federal policy. While the state has some more information about the policy actions the new Congress and President are pursuing, there is still a great deal of uncertainty around what form those policies will take in their final versions. Changes in federal tax policy could have some near–term benefit or costs to state tax revenues and taxpayers (and perhaps require new state tax legislation to conform to those federal policies). Other possible federal policy changes could affect the economy, reduce federal funding, or substantially increase state costs in future years. Changes to federal health care programs, in particular, could have significant implications for the state budget.

Recommend Legislature Set Reserve Levels At or Above Governor’s Proposal. Under the Governor’s May Revision proposal, the state would end 2017-18 with $10.1 billion in total reserves. These reserves will be a key tool for the Legislature as it prepares for the next economic downturn and federal actions that could significantly affect the state budget’s bottom line in future years. Facing these uncertainties, we would encourage the Legislature to set its total reserve level for 2017-18 at—or preferably above—the level the Governor now proposes.