This post presents our office’s outlook for the condition of the state’s General Fund through 2020-21. As is our practice, this outlook assumes the state economy will continue to grow and assumes no other changes in federal or state law and policies beyond what the Governor has proposed in the May Revision. (Obviously, many other scenarios are possible for the economy and policy.) While we assume the Governor’s proposals, we use our own estimates of future costs of state programs, along with our own estimates of revenues.

2017-18 Ends With $12.1 Billion in Reserves. Figure 1 compares our office’s assessment of the condition of the General Fund to the administration’s estimates. Our office assumes 2017-18 would end with $12.1 billion in budget reserves — about $2 billion higher than the administration’s estimate. The difference in total reserves is nearly entirely the result of our differing estimates of discretionary reserves in the Special Fund for Economic Uncertainties (SFEU). This difference is the product of two factors. Compared to the administration: (1) our office estimates the state will end 2016-17 with about $1 billion more in revenue and (2) our office’s estimate of state General Fund spending on schools and community colleges is nearly $800 million lower in 2017-18.

Assuming Economic Growth, Surpluses Through 2020-21 in LAO Outlook. Figure 2 displays our office’s multiyear outlook for the General Fund under our office’s May 2017 economic growth scenario assumptions. The top part of each bar shows our projection of the annual Budget Stabilization Account (BSA) deposit. The bottom part of each bar shows the annual operating surplus (the amount by which projected revenues exceed expenditures). As the figure shows, we estimate the state’s budget has the capacity to pay for the Governor’s May Revision proposals, build BSA reserves by more than $1 billion per year, and still have a few billion dollars to build additional reserves or make additional commitments. (Consistent with our understanding of the administration’s treatment of the Medi-Cal funding in last year’s Proposition 55 income tax measure, our estimates include no additional Proposition 55 revenues for Medi-Cal in 2018-19 through 2020-21.) 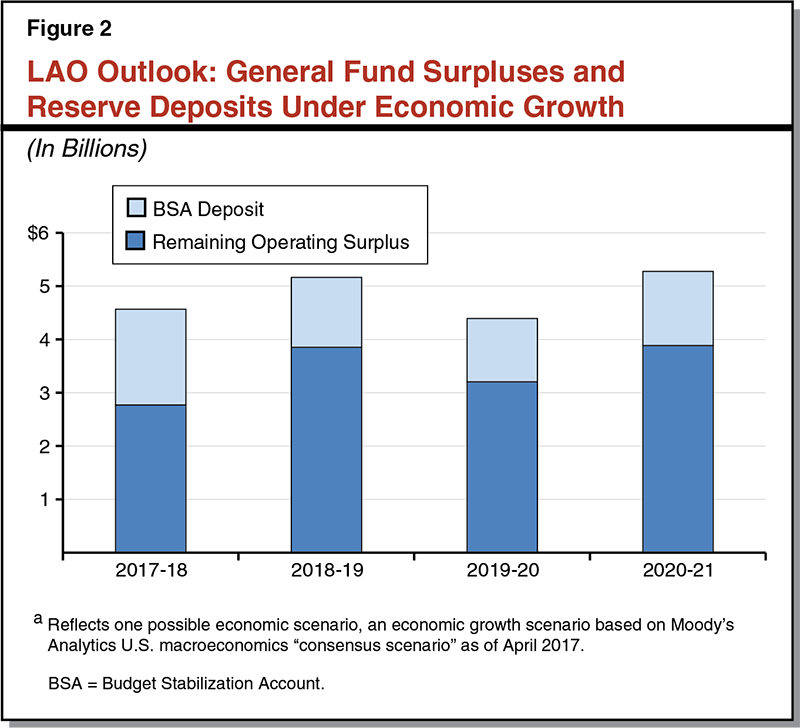 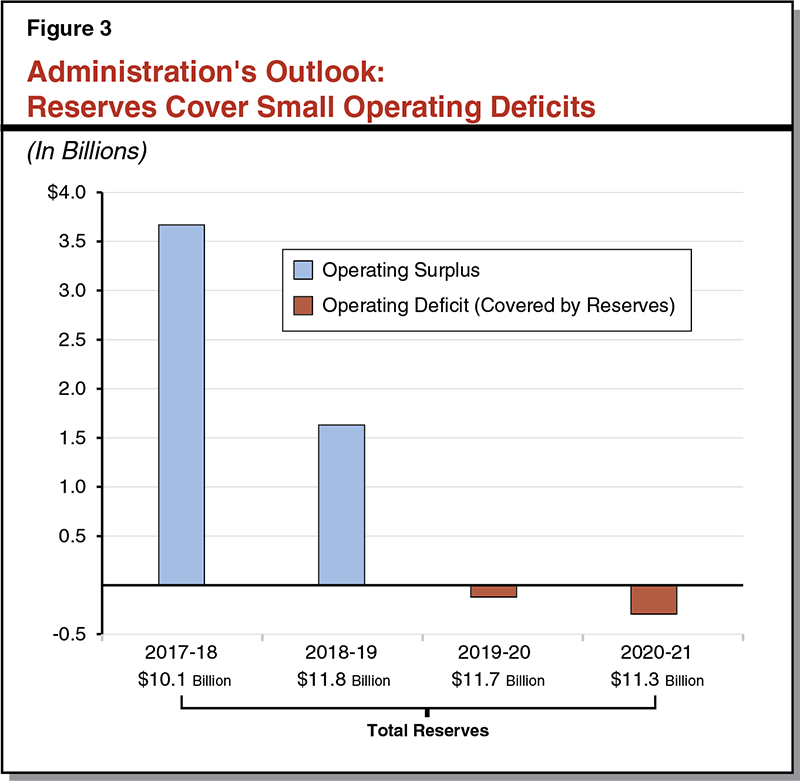 Differences in Outlooks Driven by Revenue Estimates. The differences in these outlooks are nearly entirely driven by different assumptions about how much revenue, in particular from the personal income tax (PIT), that state will collect over the next few years. Largely as a result of these differences in revenue assumptions, our office also assumes spending on schools and community colleges will be higher than the administration assumes. However, those increases are largely offset by our assessment that spending growth in other, primarily caseload-driven programs will be lower.

Actual Budget Conditions Will Differ. Both our office and the administration assume the state makes no additional budget commitments in any year over the period. If the state did make such commitments, the budget outlook would be less optimistic. Both of these outlooks also assume there are no rebates to taxpayers or tax rate reductions triggered as a result of the state reaching its constitutional spending limit or having reserve balances above certain thresholds. Moreover, both of our outlooks assume no major changes in federal policy over the outlook period. As we have noted recently, federal policy changes could affect the state economy, reduce federal funding to the state budget, or substantially increase state costs in future years. As a result of these factors, and many others, the state’s actual budget situation in several years from now will be different than the outlooks presented above.