Debt service is a significant General Fund expenditure. Below, we discuss how we estimate the state’s debt burden will change over the forecast period.

Debt-Service Ratio (DSR) Is a Common Way to Measure Debt Burden. The DSR is often used as one indicator of the state's debt burden. This ratio indicates the portion of the state’s annual General Fund revenues and transfers that must be set aside for debt-service payments on infrastructure bonds and, therefore, are not available for other state programs.

DSR Has Fluctuated Historically. As shown in Figure 1, the state’s DSR has varied considerably in past decades between about 3 percent and 6 percent. In the late 2000s, the DSR grew to about 6 percent as large bond measures were approved and state revenues dropped due to a recession. More recently, however, the DSR has declined to under 5 percent. The modest decline in the DSR occurred for a variety of reasons, including rebounding General Fund revenues, refinancing of existing debt, and state policies shifting some state debt costs from the General Fund to special funds—such as in transportation. 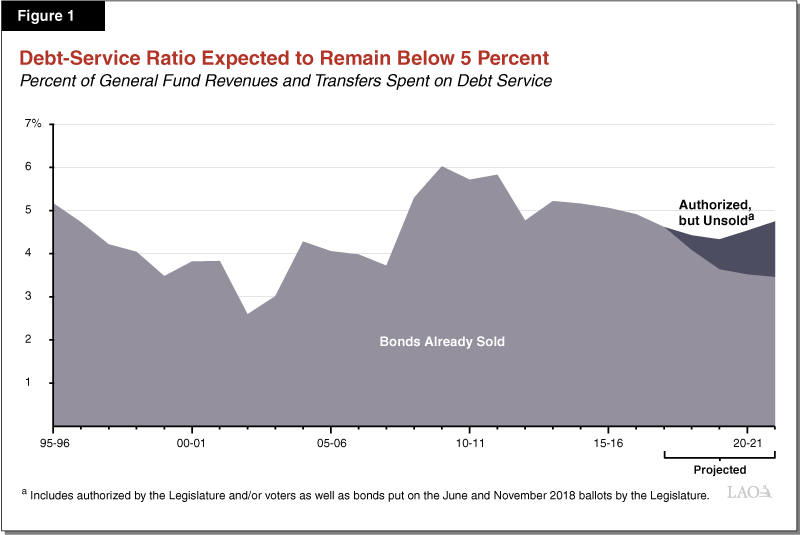 DSR Expected to Remain Below 5 Percent. We estimate that the DSR will remain somewhat below 5 percent over the next several years. This is because we project that General Fund revenues will increase at roughly the same pace as debt-service costs over the projection period. We assume that the state gradually sells bonds that have been approved by voters or put on the ballot by the Legislature. These bonds include some of the remaining unsold infrastructure bonds that voters approved in 2006, 2008, 2014, and 2016. They also include a portion of the bonds that the Legislature has put on the June and November 2018 ballots. We note that our projections do not include additional debt-service costs for any other new bonds that may be authorized by the voters or the Legislature during the forecast period.