California’s New Minimum Wage. A law passed in 2016 (SB 3 [Leno]) will increase California’s statewide minimum wage over a period of several years, reaching $15 per hour for most workers as soon as January 1, 2022. (In a 2016 blog series, we presented some data on the workers who will be affected by this policy.) As shown in the figure below, this policy will affect the state’s General Fund in multiple ways. The magnitudes—and in some cases, the direction—of these effects are uncertain, but we expect them to grow as the minimum wage increases over time. 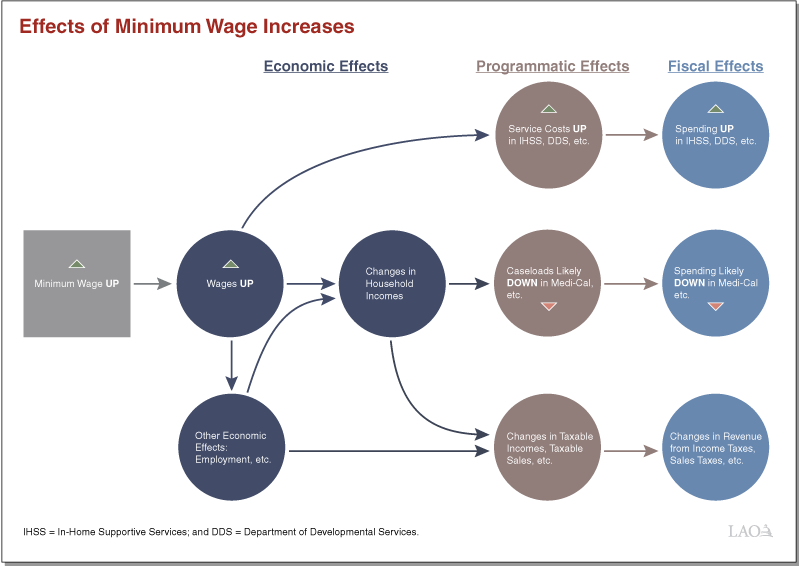 Direct Effect: Higher Service Costs in Some Programs. As shown in the top row of the figure, the higher statewide minimum wage will increase the wages of service providers for some human services programs—particularly the In-Home Supportive Services (IHSS) program and the Department of Developmental Services (DDS)—leading to higher General Fund spending on those programs.

Indirect Effect: Likely Lower Caseloads in Some Programs. As shown in the middle row of the figure, the higher statewide minimum wage will affect state spending on some health and human services programs—notably Medi-Cal and CalWORKs—due to its effects on household incomes. These income changes will affect the number of people receiving services, the cost of the services they receive, and the ways costs are shared among federal, state, and county governments. On net, these effects likely will reduce state General Fund spending on these programs.

Indirect Effect: Changes in State Revenue. As shown in the bottom row of the figure, the higher statewide minimum wage will affect General Fund revenues, primarily due to its effects on the personal income tax (PIT) and the sales and use tax (SUT), the two largest state revenue sources. Just as changes in household incomes will affect eligibility for certain state programs, it also will affect PIT payments—including the payments received from refundable credits, such as the Earned Income Tax Credit. The higher minimum wage also could affect state revenues through other channels besides changes in household incomes. For example, it could affect the restaurant industry—a key employer of low-wage workers and a key source of SUT revenue—differently from other industries.