We estimate General Fund expenditures for IHSS to be $3.8 billion in 2018‑19, slightly increasing to about $3.9 billion in 2019‑20. It is important to note that the small net growth in state IHSS expenditures in 2019‑20 masks a number of cost increases and expected savings. Specifically, in 2019‑20, most of the estimated growth in state IHSS costs is expected to be offset by General Fund savings resulting from the statutorily scheduled 7 percent reduction of IHSS service hours triggered by the expiration of the current managed care organization (MCO) tax at the end of 2018‑19. After 2019‑20, we project that IHSS expenditures will grow at a higher rate, reaching over $5.6 billion by 2022‑23. Overall, between 2018‑19 and 2022‑23, the projected average annual growth of IHSS General Fund expenditures is about 11 percent—making IHSS one of the fastest growing programs in the state. To a large degree, this growth is due to projected caseload and hours-per-consumer growth and the implementation of statutorily scheduled statewide minimum wage increases that significantly increase the average cost per consumer. Below, we discuss the major factors that affect General Fund IHSS spending over the outlook period, which extends from 2018‑19 through 2022‑23. 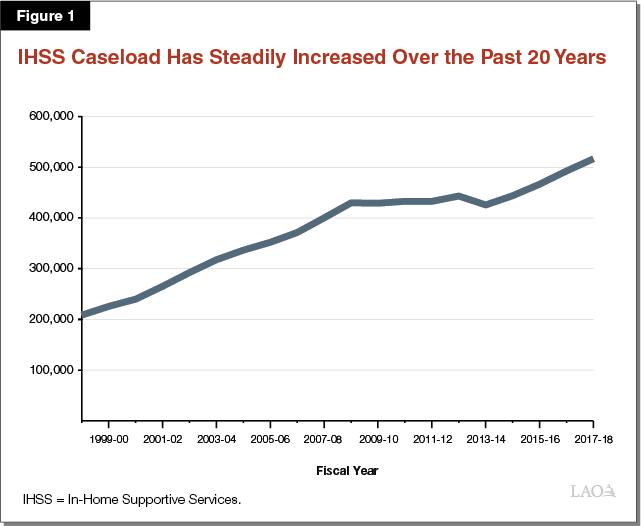 Under Current Law, Expiration of the MCO Tax Triggers 7 Percent Reduction of IHSS Service Hours in 2019‑20. As previously mentioned, the reason the net increase in IHSS costs in 2019‑20 is more modest is mainly due to the estimated savings from the triggering of the 7 percent reduction in IHSS service hours. Since 2016‑17, the General Fund has supported the restoration of IHSS service hours, which were previously reduced by 7 percent, so long as the MCO tax is in place. Under current law, the MCO tax is set to expire at the end of 2018‑19. Given this expected expiration of the MCO tax, our outlook projections assume that the General Fund support for the restoration of service hours will not be included beginning in 2019‑20. We estimate that discontinuing General Fund support and reinstituting the 7 percent reduction on IHSS service hours would result in General Fund savings of roughly $300 million annually (increasing annually thereafter with growth in caseload, hours per consumer, and IHSS wages). For further discussion of the MCO tax, please reference the “Medi-Cal” Fiscal Outlook online post.

Administration Scheduled to Release Report of 1991 Realignment and IHSS County Costs. In 2017‑18, a new IHSS county maintenance‑of‑effort (MOE)—referred to as the 2017 IHSS MOE—was established. The 2017 IHSS MOE increased counties’ share of cost in the IHSS program from $1.1 billion in 2016‑17 to about $1.8 billion in 2017‑18. Moreover, relative to the prior county MOE, the 2017 IHSS MOE is expected to grow at a faster rate year to year. (We anticipate that the 2017 IHSS MOE will grow by 7 percent annually beginning in 2019‑20 through at least 2022‑23.) In effect, this increase in county contributions to IHSS costs effectively decreases our projected state General Fund share of cost for the IHSS program by hundreds of millions of dollars annually. We note that when the 2017 IHSS MOE was initially implemented, there was concern that 1991 realignment—the revenue source used to cover IHSS county MOE costs—would no longer be able to fully cover IHSS county costs in the long term. Consequently, the 2017‑18 budget agreement required the Department of Finance (DOF) to review and report on the funding structure of 1991 realignment as part of its January 2019 budget proposal. In anticipation of the DOF report, our report Reevaluating the 1991 Realignment assesses whether 1991 realignment achieves its intended benefits and evaluates the ability of 1991 realignment to meet its funding obligations over time.