Evolution of the Balance of the Budget Stabilization Account

The budget has a few general purpose reserve accounts. The largest of these is the Budget Stabilization Account (BSA), which is governed by constitutional rules under Proposition 2 (2014). This post discusses the various types of deposits the Legislature has made into the BSA that now compose its balance. We also present our projections of the estimated balance in the BSA under our recently published The 2019‑20 Budget: California’s Fiscal Outlook.

Proposition 58 Required Deposits Until BSA Reached Certain Size. Under Proposition 58, deposits into the BSA were no longer required if the fund reached $8 billion or 5 percent of General Fund revenues, whichever was larger. Proposition 58 explicitly permitted the Legislature to transfer amounts into the BSA so that its balance exceeded either of these thresholds.

Deposit Made Under Rules of Proposition 58 in 2014‑15 Budget Package. In the 2014‑15 budget package, the Legislature made a deposit into the BSA of $1.6 billion under the rules of Proposition 58. (Before this transfer the BSA had no balance.) When the Legislature planned this deposit in the 2014‑15 Budget Act, it already had approved the placement of a constitutional amendment on the ballot to amend the rules of the BSA—Proposition 2.

Proposition 2 Now Governs BSA Deposits. In November 2014, voters approved Proposition 2. In addition to other changes, Proposition 2 created a set of formulas that specified minimum annual amounts the state must deposit into the BSA and use to pay down certain debts. Under the measure, the state must set aside two amounts: (1) 1.5 percent of General Fund revenues and (2) a portion of capital gains revenues that exceed a specified threshold. From these two amounts, the state must allocate half to increase the balance of the BSA and the other half to pay down debts.

Proposition 2 Also Created New Rules Withdrawing Funds From the BSA. Under the rules of Proposition 2, the Legislature can only make a withdrawal from the BSA if the Governor has first called a budget emergency. The Governor may only call a budget emergency if one of two conditions holds: (1) estimated resources in the current or upcoming fiscal year are insufficient to keep spending at the level of the highest of the prior three budgets, adjusted for inflation and population (a “fiscal budget emergency”), or (2) in response to a natural or man-made disaster. In the case of a fiscal budget emergency, the Legislature may only withdraw the lesser of: (1) the amount needed to maintain General Fund spending at the highest level of the past three enacted budget acts, or (2) 50 percent of the BSA balance.

Constitution Requires “True Up” of BSA Deposits. Under Proposition 2’s true-up provisions, the state reevaluates each year’s BSA deposit twice: once in each of the two subsequent budgets. The state does this because initial estimates of future capital gains revenues are highly uncertain. This process attempts to align those original estimates of required deposits with actual revenues. Under these reevaluations, the state revises the BSA deposit up (down) if excess capital gains taxes are higher (lower) than the state’s prior estimates.

Legislature Has Made Two Optional Deposits Into the BSA. In recent years, the Legislature has elected to deposit additional amounts into the BSA—above the constitutionally required minimums. In particular, the Legislature deposited an additional $2 billion into the BSA in 2016‑17 and an additional $2.6 billion in 2018‑19. The language of Proposition 2 does not speak to these optional deposits. Consequently, it is not clear: (1) which, if any, of the withdrawal rules in Proposition 2 apply to these funds, or (2) whether these deposits count toward the 10 percent threshold. Moreover, it is not clear whether these rules also apply to the $1.6 billion deposit made before the passage of Proposition 2.

Optional Deposits Have Been Used to Fund True-Up Deposits. The optional deposit legislation in both 2016‑17 and 2018‑19 indicated those deposits would be used for any true-up deposits for that year and the prior year. For example, the $2 billion optional deposit made in 2016‑17 was used to fund estimated true-up deposits for 2015‑16 and 2016‑17. As Figure 1 shows, this means that $500 million of the initial $2 billion deposit is “constitutionally required” (under the true-up provisions) and the remainder is optional. Under our recent Fiscal Outlook revenue estimates for 2017‑18 and 2018‑19, the initial $2.6 billion optional deposit made in 2018‑19 would now be mostly constitutionally required, with only $320 million still considered optional. (That is because our estimates of capital gains revenues for 2017‑18 and 2018‑19 are now higher than the budget act estimates by billions of dollars.)

Trailer Bill Legislation Allocated Infrastructure Payments for 2019‑20 Through 2021‑22. The 2018‑19 optional deposit was made to bring the balance of the BSA to the threshold of 10 percent of General Fund taxes (at the time, this was estimated to be $13.8 billion). The budget package also included trailer bill legislation that, beginning in 2019‑20, appropriated the anticipated required infrastructure spending for three years. The legislation dedicated these funds to three purposes: state capital outlay, rail projects, and multifamily housing.

Balance of the BSA 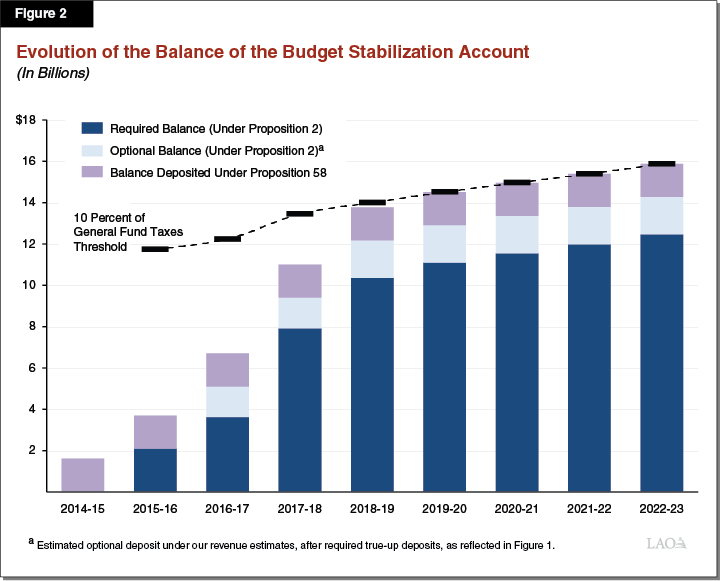 Including Optional Deposits, the BSA Reaches Threshold Level in 2019‑20. Under our revenue estimates in the Fiscal Outlook, the formulas under Proposition 2 yield a required deposit in 2019‑20 of $1.7 billion. If deposited into the BSA, this would bring the total balance in the account to $15.4 billion. Under our estimates, this total balance would exceed the threshold of 10 percent of General Fund taxes in 2019‑20 by about $900 million. Under the rules of Proposition 2, any deposit amount that “would result in a balance in the account that…exceeds 10 percent of the amount of General Fund proceeds of taxes” must be spent on infrastructure. As such, under the Legislature’s current policy that all of the deposits in the BSA count toward the account’s “balance,” the state would be required to spend that $900 million on infrastructure in 2019‑20.

Alternative Interpretations of Proposition 2. Under alternative interpretations of Proposition 2, the BSA deposit made before November 2014 (under the rules of Proposition 58) and/or the optional deposits made after 2014 (under the rules of Proposition 2) would not count toward the BSA balance for the purposes of the 10 percent threshold. If so, in 2019‑20, the entire $1.7 billion estimated deposit would be transferred to the BSA and no additional money would be spent on infrastructure. Depending on which of these different types of deposits count toward the BSA’s balance, the BSA would reach the 10 percent threshold in different years. In particular, under our outlook, the balance would reach the threshold:

The Legislature’s policy appears to be that both the optional deposit and Proposition 58 deposit should count toward the 10 percent threshold. As such, this is the interpretation we reflect in the Fiscal Outlook publication. If the Legislature adopted one of the alternative interpretations, the state would be required to deposit more money into the BSA and would not be required to spend as much on infrastructure.