The EITC is a personal income tax credit that is intended to reduce poverty by increasing the after-tax income of California’s poorest working households. The 2019‑20 budget package modifies and expands the state EITC in three ways. (For more information about the first state EITC, see our report, The 2015‑16 Budget: California Spending Plan.) The administration estimates these changes will reduce tax revenue in 2019‑20 by $600 million. As in the prior year, the budget package also includes $10 million for education and outreach to expand awareness of the EITC.

This post describes each of the three changes. The administration coupled the EITC expansion with changes to other tax provisions that increased tax revenue. We describe those changes to the state’s tax laws in a companion post.

Extends Income Eligibility to $30,000. The maximum income (from all sources, not just “earned income” from wages or self-employment) for a filer to be eligible for the EITC will increase to $30,000 from its current level of $24,950 for filers with dependents or $16,750 for filers with no dependents. The limit will be adjusted for inflation annually after the state minimum wage reaches $15. (Under current law, minimum wage is expected to reach $15 an hour in 2022).

Provides Additional Credit for Filers With a Dependent Under Age Six. The budget package provides a new $1,000 credit for every EITC filer with at least one dependent child under the age of six, if the filer’s income is $25,000 or lower. The amount of the additional credit is reduced by $20 for every $100 of additional income after $25,000 so that the amount phases out to zero for filers with income above $30,000. When state minimum wage reaches $15 an hour the phase out for this credit will be adjusted for inflation.

Phases Credit Out More Slowly. In addition to extending the credit’s income eligibility range, the package increases the credit amount for filers with income in the middle and upper ends of the previous eligibility range. As shown in Figure 1, credit amounts will increase for filers with incomes above certain levels, depending on the number of dependents. 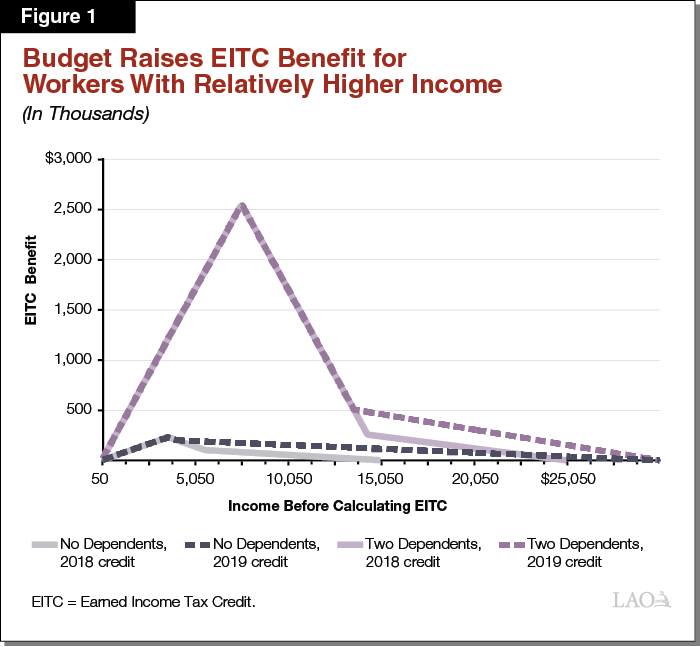