Budget Package Repays $11.1 Billion in Debts and Liabilities in 2019‑20. The annual budget pays down several billion dollars of liabilities each year under set constitutional and statutory repayment schedules. These include, for example, billions of dollars in debt service on government obligation bonds. In addition to these routine payments, the 2019‑20 budget package makes significant additional payments toward paying down debts in liabilities in two of these categories: retirement liabilities and budgetary borrowing. Altogether, as Figure 1 shows, the budget makes $11.1 billion in outstanding debts and liabilities repayments, falling into two categories: 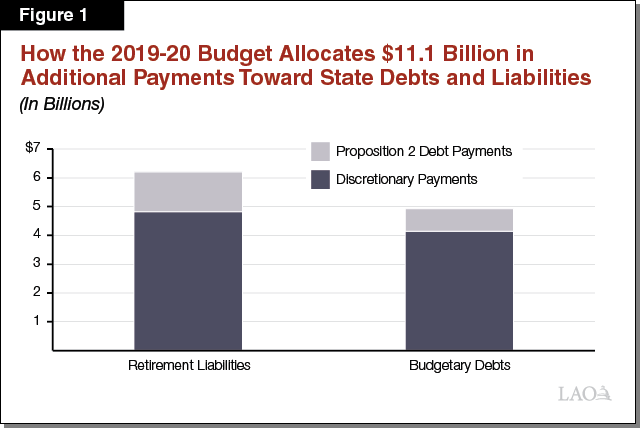 This post describes the actions the 2019‑20 budget took in these areas in more detail.

State Has Large Retirement Liabilities. An unfunded liability exists when actuaries determine that—after accounting for various actuarial assumptions about the future—there are insufficient assets on hand to pay benefits that have been earned to date. As of June 30, 2018, the state has large unfunded liabilities associated with pensions for state employees (administered by CalPERS) and teachers (administered by CalSTRS) and retiree health benefits earned by state employees.

The spending plan made significant progress in addressing remaining budgetary borrowing amounts that fall into three categories: (1) deferrals, (2) special fund loans, and (3) settle up. This section describes each of the actions taken in this regard.

To address budgetary shortfalls, at various points, the state made adjustments to expenditure accounting to push costs into different fiscal years, providing a temporary budgetary benefit.

Background on the Payroll Deferral. The state pays its employees monthly. The 2009‑10 budget package included an ongoing one-month deferral of state payroll from June to early July, providing savings for the state. This action was only reflected in the state’s accounting reports—it did not affect when paychecks were actually issued to state employees. On an ongoing basis, the state’s budget documents still reflected 12 months of payroll, but rather than reflecting payroll for June of the last month of the fiscal year, they reflect June of the previous fiscal year. Figure 2 shows how this works. (For budgetary purposes, the state only recognized the deferral in the General Fund, not other funds’ statements.)

Cost to Undo the Payroll Deferral. In the first year a deferral is made, it results in significant savings for the state because the state only pays the partial cost of a year’s expense. For example, in the case of the payroll deferral, the state only reflected 11 months of payroll in the 2009‑10 budget, providing hundreds of millions of dollars in budgetary savings. Undoing this deferral, conversely, means the state must reflect an additional month of payroll—13 months—in a budget, carrying an additional cost. The spending plan allocated $707 million General Fund to undo the payroll deferral. (There were no budgetary special fund costs associated with undoing this deferral.)

Background on the Pension Deferral. The state makes quarterly payments to CalPERS for pension contributions for state employees. The state pays the fourth-quarter contribution to CalPERS in the first quarter of the subsequent fiscal year. (Our office has not been able to discover the year this deferral was first done.) This means the state makes the transfer in the first few days of July. This deferral only applies to the state’s General Fund pension payments—other funds’ fourth-quarter CalPERS payments are paid in June.

Cost to Undo the Pension Deferral. Undoing the pension deferral requires transferring funds to CalPERS at the end of June instead of July. The spending plan allocated $973 million General Fund to undo the pension deferral. (There were no special fund costs associated with undoing this deferral.)

State Fully Repays All Outstanding Special Fund Loans in 2019‑20. The spending plan fully repays all outstanding special fund loans to the General Fund. Although recent budgets have repaid special fund loans using constitutionally required debt payments under the provisions of Proposition 2, the spending plan uses $1.3 billion in general purpose General Fund monies to repay these outstanding loans. (This figure also includes repayments to the Transportation Congestion Relief Fund, which are not displayed in the totals Figure 1.)

Weight Fees Loans—a Unique Type of Special Fund Loan—Also Are Fully Repaid. In addition, the spending plan uses $886 million to fully repay all outstanding weight fee loans to the General Fund. In 2011, budget-related legislation redirected weight fee revenues to fund bond debt service for transportation-related bonds. Initially, the amount of revenues exceeded the debt service costs and the state loaned that excess to the General Fund. Over time, debt service costs have increased such that they now exceed weight fee revenues. The General Fund has been repaying the loans by paying that difference (the state has also been counting these repayments toward required Proposition 2 debt payments). This year, the spending plan repays the entire outstanding amount of the weight fee loans by setting aside general purpose General Fund monies.

State Repays All Outstanding Settle-Up Obligations in 2019‑20. Sometimes the state settles up as a fiscal year is ending, but other times, the state does not settle up immediately. In the latter cases, the state creates an outstanding fiscal obligation known as a settle-up obligation. At the beginning of 2019‑20, the state had $687 million in total outstanding settle up remaining. The 2019‑20 budget package repays all of this outstanding settle up. Of this total, the state counts $391 million toward required debt payments under Proposition 2. (A provision of Proposition 2 defined all settle-up obligations created prior to 2014‑15 as allowable debt payments.)