In 2017, the Legislature enacted Chapter 5 (SB 1, Beall), which increased fuel taxes and vehicle fees to augment funding for California’s transportation system. A significant portion of the new revenue is directly distributed to cities and counties on a formula basis as “shared revenues” primarily for maintaining and rehabilitating local streets and roads. This post explains how revenue from the new fuel taxes and vehicle fees are distributed to local governments and shows that SB 1 already has increased state funding for local streets and roads by $1.3 billion—a doubling of the previous level of shared revenues—with additional revenue increases projected in current and future years.

How Maintenance of Local Streets and Roads Is Funded

The 482 cities and 58 counties in California own and maintain over 325,000 lane-miles of local streets and roads, which represents 82 percent of the total lane-miles in the state. This network is a vital component of the state’s transportation system, as 44 percent of the annual vehicle miles traveled is driven on local streets and roads. Local governments also own and maintain over 12,000 bridges and other essential transportation assets such as storm drains, traffic signals, and sidewalks.

While various local revenue sources—such as local general funds and sales taxes—make up a majority of the funding for streets and roads, cities and counties also depend on federal and state funds. A major source of state funding for streets and roads is through shared revenues, which is generated from about one-third of the state’s excise taxes on gasoline and diesel. Shared revenues reflect the notion that some of the fuel taxes collected is associated with driving on local infrastructure. Local governments mainly use this funding source for maintenance and rehabilitation, but also utilize funding for other purposes such as new construction, engineering work, and administrative costs. In the fiscal year prior to the passage of SB 1 (2016‑17), $1.3 billion was distributed to cities and counties as shared revenues, which was 19 percent of the total funding made available for local streets and roads.

Increased Fuel Taxes and New Vehicle Fees. Among other changes, SB 1 increased existing fuel taxes and created two new vehicle fees. Three of the fuel tax increases went into effect on November 1, 2017 and include a (1) 12 cent per gallon increase to the gasoline excise tax, (2) 20 cent per gallon increase to the diesel fuel excise tax, and (3) 4 percent increase to the diesel sales tax. In addition, the “swap tax” rate on gasoline was modified from being administratively determined based on estimated gasoline prices to being set at 17.3 cents per gallon on July 1, 2019. (This reflects an increase over the previous rate of 11.7 cents per gallon.) Inflationary adjustments for all fuel excise taxes—both those previously existing and those added under SB 1—will begin July 1, 2020.

In total, SB 1 is expected to generate over $4.4 billion in additional revenue for transportation programs in the current year. Figure 1 shows how revenue from the fuel tax increases and new fees are distributed to various transportation programs. (The figure does not show the distribution of the swap tax, which will continue to be distributed according to existing statutory formulas.) Roughly two-thirds of the revenue is transferred into the newly created Road Maintenance and Rehabilitation Account (RMRA). Of this amount, $762 million is set aside annually for specified purposes such as active transportation, bridge and culvert repairs, and transportation research. The remaining funds are distributed equally between (1) highway maintenance and rehabilitation and (2) shared revenues for local streets and roads. Cities and counties receive equal splits of the shared revenues. City distributions are based on population, whereas county distributions are determined by the number of registered vehicles and miles of maintained county roads. 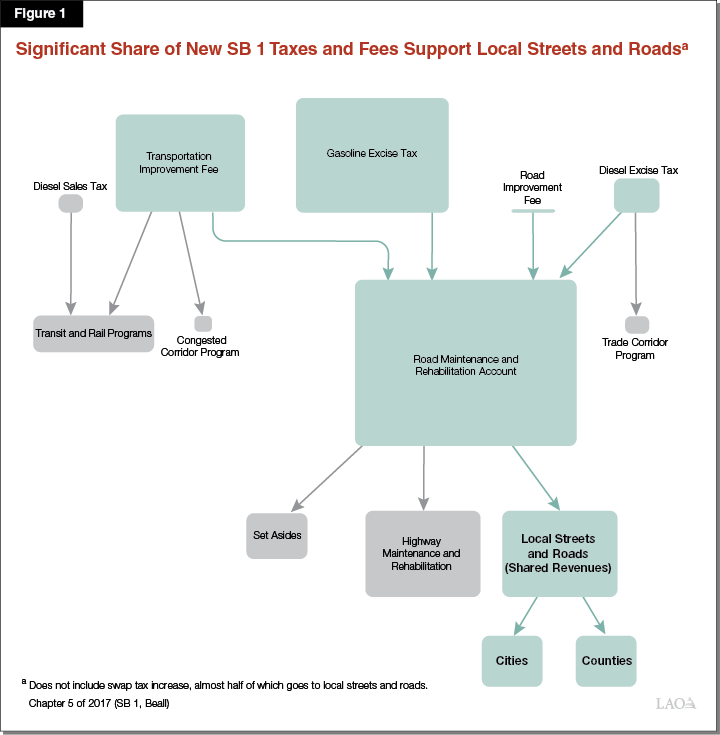 Other SB 1 Changes Affecting Shared Revenues. Senate Bill 1 also made other changes to existing fuel taxes that fund shared revenues for local streets and roads. (More on the existing fuel taxes can be found on our web page Transportation Taxes and Fees.) Effective November 1, 2017, the base diesel excise tax rate was modified from being administratively determined to being set at its current rate of 16 cents per gallon. In addition, SB 1 required the repayment of $760 million from the General Fund to the Traffic Congestion Relief Fund by 2019‑20. Of this amount, $75 million is distributed annually to cities and counties for local streets and roads purposes from 2017‑18 to 2019‑20.

Shared Revenues Have Doubled Under SB 1

As shown in Figure 2, increases in shared revenues associated with SB 1 have significantly improved funding for local streets and roads. In 2018‑19, shared revenues increased to $2.6 billion—a twofold increase from prior to the passage of SB 1. Furthermore, the enacted 2019 - 20 budget anticipates that shared revenues will increase by an additional $194 million. This is in large part due to the swap excise tax increasing by 5.6 cents per gallon, which went into effect at the beginning of the fiscal year. 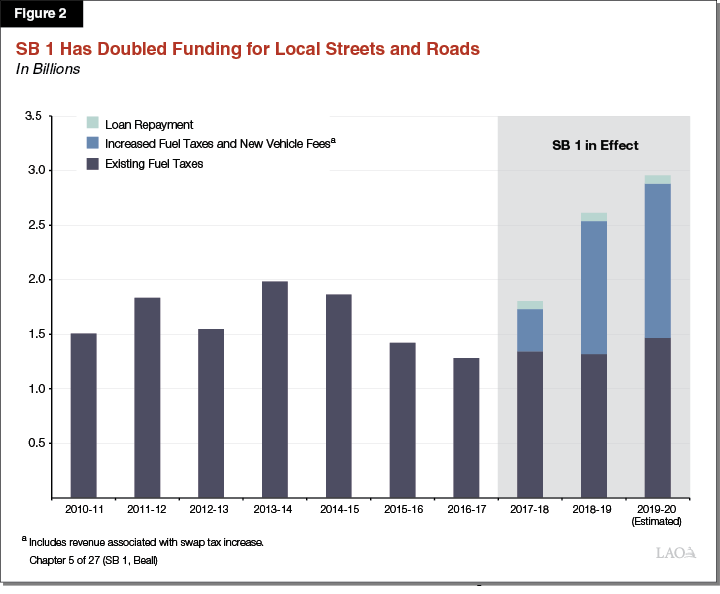 Going forward, shared revenues are expected to increase further as the new road improvement fee on ZEVs takes effect, as well as the fuel taxes and new vehicles fees are adjusted annually for inflation. While funding for local streets and roads is anticipated to increase, the exact amount each year will depend on various factors such as inflation in California and the consumption of motor vehicle fuels, which is a function of the number of vehicle miles traveled and the fuel efficiency of vehicles.