How Is Transit Funded?

Many Agencies Provide a Variety of Transit Services. For the purposes of this page, transit services includes bus, rail, paratransit, vanpool, and ferries. (In addition to transit, there are other mass transportation services, such as intercity rail and commercial aviation.) Transit services are provided by over 200 operators in California, including cities, counties, independent special districts, transportation planning agencies, private nonprofit organizations, universities, and tribes.

Transit Funding Comes From Variety of Sources. Transit operators that receive federal funds are required to regularly report their financial information to the federal government, which publishes a national report each federal reporting year (FRY). In total, transit services in California were funded at $12 billion in FRY 2018. As shown in Figure 1, this funding came from various sources, including local, federal, and state taxes, as well as from passenger fares and fees. 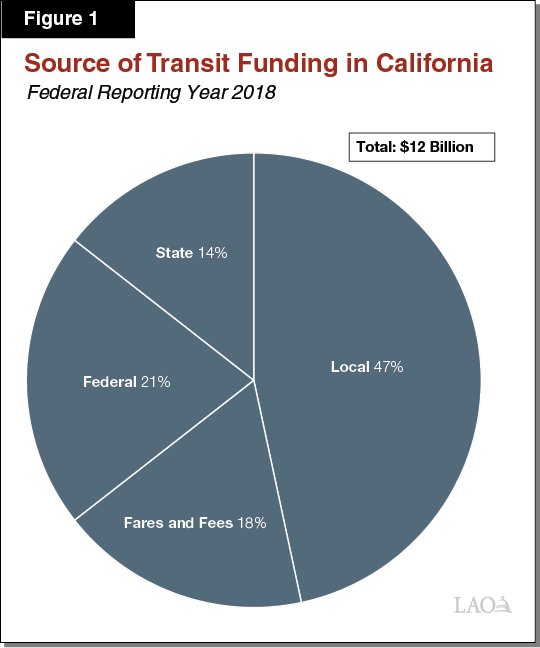 Local Government Contributed Almost One-Half of Transit Funding. Local funds are generated in multiple ways, but 79 percent of these funds came from sales tax revenues. Local sales tax revenues include both counties’ share of the Local Transportation Fund (LTF), as well as local sales tax measures. Through LTF, counties receive revenues from a one-quarter percent sales tax applied to all goods statewide. All counties receive LTF revenues, which must be used for transportation purposes, including transit services. In addition, in 25 “self-help” counties, voters have passed a one-half percent sales tax for transportation, a portion of which goes towards transit.

State and Federal Funds Make Up Roughly One-Third of Funding. State and federal funds come from multiple sources, but the majority comes from state and federal taxes on gasoline and diesel. Federal funds are largely disbursed through the Fixing America’s Surface Transportation (FAST) Act, which is funded by the federal tax on gasoline. There are 33 programs under the FAST Act with five programs making up 89 percent of federal funds for transit in California: (1) the Urbanized Area Formula Program, (2) the Rural Area Formula Program, (3) the State of Good Repair Program, (4) the Bus and Bus Facilities Grant Program, and (5) the Capital Investment Grants Program. Most of these funds are disbursed on a formula basis.

State Transit Assistance, which is funded through the state sales tax on diesel, makes up the largest share of state funds for transit, distributing about $700 million to planning organizations and operators on a formula basis in 2017‑18. Other state programs that specifically fund transit include the Low Carbon Transit Operations Program (LCTOP) and the State of Good Repair Program (SGR), which are disbursed on a formula basis, as well as the Transit and Intercity Rail Capital Program (TIRCP), a competitive fund. In 2017‑18, LCTOP was funded at $71 million, SGR at $105 million, and TIRCP at $209 million. Transit may also receive funding through other state programs—such as the Solutions for Congested Corridors and the State Transportation Improvement Program—that also support projects to expand or repair highways and local streets and roads.

One-Fifth of Funding Comes From Fares and Fees. Users of transit services pay providers fares to use their services and operators generate additional revenues from users through auxiliary fees, such as for park and ride services, concessions, and advertising. However, these fares and fees only make up a small share of total revenues for transit.

How Is Funding for Transit Spent?

$12 Billion Spent on Local Transit in California. Expenditures for transit generally are categorized as operations or capital. Operations include compensation for transit drivers and other staff, as well as vehicle and facilities maintenance. Capital includes the costs to purchase equipment—such as new buses and rail cars—and construct facilities, such as stations and rail systems. As shown in Figure 2, 64 percent of transit expenditures in California were for operations in FRY 2018.

More Than One-Half of Operating Expenses Were Spent on Buses. Buses are the most popular mode of transit. In FRY 2018, 63 percent of all passenger trips on transit in California were made on buses, contributing to transit operators spending more than one-half of the operating expenses on this mode. In contrast, operators spent about one-third of the operating expenses on rail service.

Majority of Capital Expenditures Are Spent on Rail. In FRY 2018, about one-third of all passenger trips on transit in California were made on rail. Although rail is a less commonly used mode of transit than buses, rail typically requires more extensive infrastructure and equipment to operate. As such, rail projects accounted for more than 70 percent of transit capital expenditures.

What Taxes Apply to Gasoline in California?

Several Different Taxes Affect Gasoline Prices. Many people refer to “the gas tax” when talking about transportation taxes and fees. Typically, people mean the state excise tax on gasoline because this is the primary source of state funding for highways and roads. However, federal excise taxes and state and local sales taxes also apply to gasoline in California. (Various state, federal, and local taxes are also placed on diesel fuel.) The figure below shows how much a driver pays for each tax when purchasing a gallon of gasoline costing $5.33 (the average gasoline price in California at the time this analysis was prepared). In this example, the taxes make up about 18 percent of the price, with the state excise tax accounting for over half of all the taxes paid. 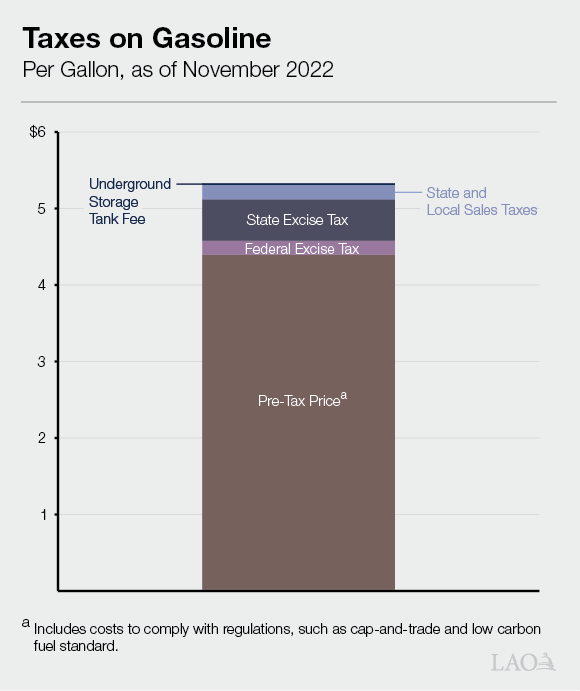 As shown in the figure, the specific taxes on gasoline include:

Storage Fees and Other State Policies and Programs Also Affect Gasoline Prices. In addition to the taxes described above, the state levies a fee of 2 cents per gallon on owners of underground storage tanks that contain petroleum. The state also has other programs and regulations that affect gasoline prices. For instance, the state’s cap-and-trade program affects gasoline prices because it requires fuel suppliers to purchase permits that cover the greenhouse gases emitted when the fuel is burned. We estimate that this currently adds 21 cents per gallon to the price of gasoline. The state also has a low carbon fuel standard program that requires suppliers of high carbon fuels (such as gasoline) to purchase credits from suppliers of low carbon fuels (such as renewable diesel). We estimate that this currently adds 12 cents per gallon to gasoline prices.

How Does the State Spend Gasoline Tax Revenues?

State Excise Tax Pays for Highways and Roads. In 2022-23, the state gasoline excise tax is set at 53.9 cents per gallon, and the tax is expected to raise $7.4 billion from gasoline purchases for vehicles using public roads. In effect, the 53.9 cent tax is comprised of three distinct components, each of which is adjusted for inflation in July and allocated based on formulas set forth in state law. The figure below shows a simplified version of how of each of these taxes are allocated to major transportation accounts and programs. 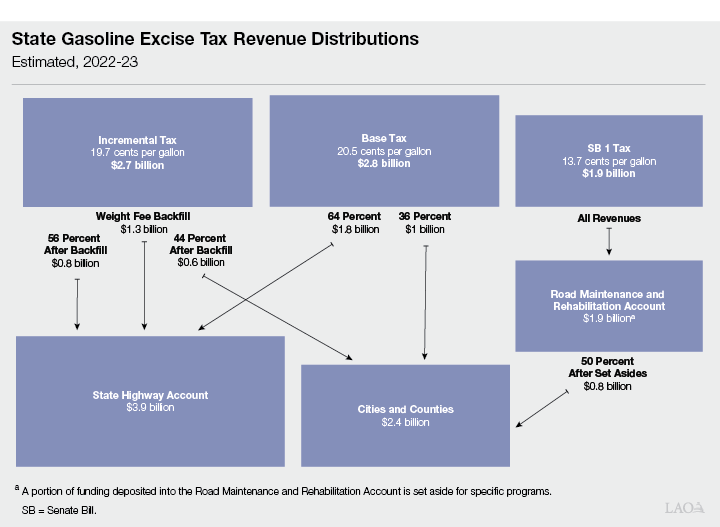 As shown in the figure, the state excise tax on gasoline consists of the following:

State Excise Tax Also Pays for a Few Other Programs and Costs. Not counted above or shown in the figure is an additional $420 million in state gasoline excise tax revenues. Most of these revenues come from gasoline purchases for off-highway vehicles, agricultural vehicles, boats, and aircrafts. The state does not spend these funds on highways and road programs since these vehicles do not use this infrastructure. Instead, the state dedicates these revenues to the General Fund, state parks (for general park purposes, off-highway vehicle programs, and boating programs), agricultural programs, and aeronautics programs. In addition, a small portion of state gasoline excise tax revenues pay for the costs associated with collecting and distributing the revenues.

How Have Gasoline Taxes Changed Over Time? 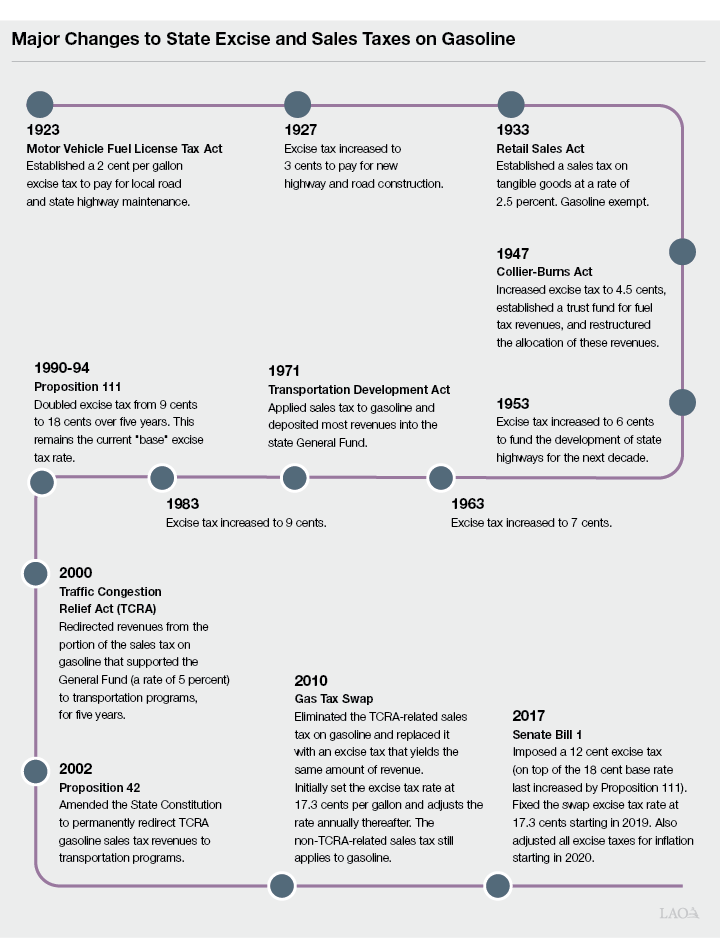 Below, we summarize how certain gasoline taxes have changed over time.