On February 12, 2020, the California High‑Speed Rail Authority (HSRA) released a draft of its 2020 business plan, which provides updated information on its approach to delivering the state’s high‑speed rail project. Specifically, the draft plan continues HSRA’s proposal—first articulated in 2019—to construct a rail segment from Merced to Bakersfield. Additionally, it describes HSRA’s plan to use a third‑party public entity to run interim high‑speed rail service on that segment. HSRA’s plan to focus on the Merced‑to‑Bakersfield segment is informed by its updated estimates of project costs and funding availability, as well as by the results of a study performed by its consultant, the Early Train Operator (ETO), which concluded that Merced to Bakersfield was preferable to the other alternatives it considered for launching interim high‑speed rail service.

In this report, we identify a number of key issues for legislative oversight. First, we point out that the near‑ and long‑term schedules identified in the draft 2020 business plan appear ambitious. Second, we identify some near‑ and long‑term funding challenges confronting the project. Third, we raise concerns that HSRA’s plan to use a third‑party public entity to operate interim service from Merced to Bakersfield appears to be inconsistent with the spirit of Proposition 1A. Forth, we identify some of the key assumptions made by the ETO that affect its assessment of alternatives. Fifth, we identify some key actions that HSRA plans to take in the coming months that will significantly limit the state’s flexibility to change its approach to the project in the future.

With these issues in mind, the Legislature will want to consider whether it is comfortable with HSRA’s proposed approach, would like an alternative approach, or would like to preserve its flexibility to change the project in the future. It will be important for the Legislature to provide direction soon given that HSRA is poised to make key decisions—such as entering into major contracts—that will reduce flexibility to change the project if legislative priorities change, costs increase, or planned funding does not materialize.

The California High‑Speed Rail Authority (HSRA)—an independent authority consisting of a nine‑member board appointed by the Legislature and Governor—is responsible for planning and constructing an intercity high‑speed train system that would link the state’s major population centers. State law requires HSRA to prepare a business plan every even year that provides certain key information about the planned high‑speed rail system. On February 12, 2020, HSRA released a draft of its 2020 business plan. The authority must adopt a final business plan by May 1 following public review and comment on the draft plan. State law also requires HSRA to provide a project update report (PUR) every odd year that provides certain updated information, such as on costs and schedule. The HSRA released its most recent PUR on May 1, 2019.

In this report, we (1) provide an overview of the high‑speed rail project, including its funding sources, progress made to date, and a summary of changes made in the 2019 PUR; (2) describe the major features of the draft 2020 business plan; (3) identify key oversight issues for the Legislature to consider at this stage of the project; and (4) provide options given that the project is at a critical decision point.

Establishment of HSRA and Statutory Requirements

HSRA Created in Statute in 1996

Voters Approved Proposition 1A in 2008 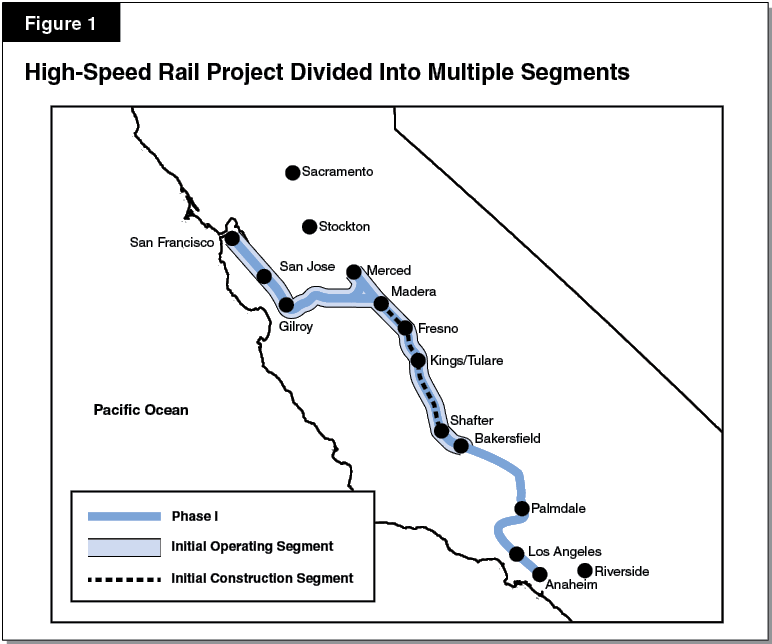 Project Funding and Expenditures to Date

In this section, we summarize the major sources of funding available to the high‑speed rail project and the project’s expenditures to date.

In this section, we discuss some key features of the 2019 PUR—which proposed some significant revisions to the 2018 business plan—and provide some background on recent project activities.

Additional Construction Beyond ICS to Merced and Bakersfield

On February 12, 2020, HSRA released a draft business plan for public review and comment. This draft 2020 business plan updated the project’s delivery plan. In the next three sections, we summarize various aspects of the updated plan, which is largely consistent with the plan outlined in the 2019 PUR. In this section, we summarize the updated plan for delivering the project, which focuses on the Merced‑to‑Bakersfield segment.

Continues Plan to Extend to Merced and Bakersfield

In this section, we review key updates to the schedule, cost, and funding for the high‑speed rail project that are made as part of the draft 2020 business plan—particularly in terms of how they compare to the assumptions in the 2018 business plan and 2019 PUR. 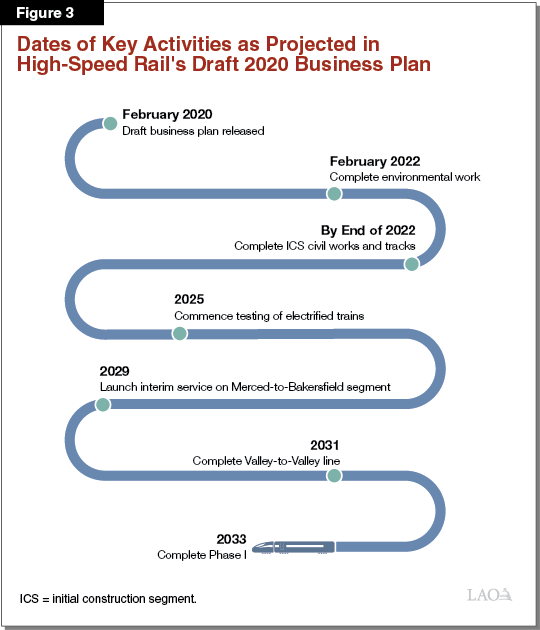 Does Not Revise Cost Estimates for Constructing Remainder of Phase I

In this section, we review the key next steps for the project identified in the draft 2020 business plan.

Schedule for Valley‑to‑Valley Line and Phase I Appears Ambitious

Key Oversight Issues—Funding May Not Be Adequate

In this section, we discuss some near‑ and long‑term funding challenges confronting the high‑speed rail project.

Unclear if Expected Funding for Merced‑to‑Bakersfield Segment Will Materialize

No Funding Plan Beyond Merced to Bakersfield

In this section, we discuss how HSRA’s plan to use a third‑party public entity to operate interim service from Merced to Bakersfield appears to be inconsistent with the spirit of Proposition 1A.

Subsidy of Interim Service Appears Inconsistent With Spirit of Proposition 1A

In this section, we discuss how some of the key assumptions made by the ETO could affect its assessment of alternatives for interim high‑speed rail service, including on the proposed Merced‑to‑Bakersfield segment.

ETO Analysis Based on Various Assumptions, Some of Which Appear Optimistic

In this section, we note that some key actions that HSRA plans to take in the coming months would significantly limit the state’s flexibility to change its approach to the high‑speed rail project in the future.

The project is at a key decision point. This is because the HSRA has indicated that it plans to move forward this year with various actions that would make it more difficult for the state to select an alternative option in the future rather than the HSRA’s approach of focusing on launching interim service on the Merced‑to‑Bakersfield segment. Accordingly, it will be important for the Legislature to determine if it is comfortable with HSRA’s proposed approach. If the Legislature is not comfortable with this approach, it will want to decide whether it would like HSRA to pursue a specific alternative approach or retain flexibility to consider other approaches in the future. We discuss these two options further below.

We note that the Legislature lacks a natural opportunity to provide clear direction for the project in 2020, since HSRA indicates it does not need to seek an appropriation as part of the 2020‑21 budget. Therefore, direction from the Legislature would likely require legislation.

If Legislature Does Not Want to Commit to Specific Approach Now, Could Take Actions to Preserve Flexibility