The Legislature likely will be asked to approve labor agreements for eight bargaining units in 2020—the employees represented by these bargaining units account for more than one-half of the state’s General Fund personnel costs. The purpose of this post is to highlight the importance of requiring the administration to justify compensation increases it agrees to in labor agreements submitted to the Legislature for approval. In particular, we discuss the importance of compensation studies to provide such justification. Labor agreements establish the state’s compensation policies and essentially lock the state into a level of spending for the future. Especially in the case of labor agreements that are in effect for multiple years, these provisions limit the Legislature’s flexibility to respond to evolving economic conditions. There currently is significant economic uncertainty with unknown effects on the state’s budget in both the short and long term. Accordingly, although we think the administration should justify compensation increases in any economic condition, it is particularly important now.

Legislative and Employee Ratification of Labor Agreements Is Final Step in Collective Bargaining Process. Compensation for rank-and-file state employees—constituting about 80 percent of the state workforce—is established through the collective bargaining process under the Ralph C. Dills Act (Dills Act). The Governor is the state employer for purposes of bargaining although some rank-and-file employees work for another elected constitutional officer. At the bargaining table, the Governor is represented by the California Department of Human Resources (CalHR). Employees are organized into 21 bargaining units that are represented by unions at the bargaining table. After CalHR and a union agree to terms and conditions of employment, the administration submits to our office the resulting labor agreement—referred to as a memorandum of understanding, or MOU—and the administration’s estimated costs of the agreement. Our office has ten calendar days after receiving the MOU to issue a fiscal analysis to the Legislature. Pursuant to Section 19829.5 of the Government Code, the MOU shall not be subject to legislative determination until either our office has released its analysis or ten calendar days have elapsed. During its ratification vote, the Legislature votes to approve or reject the entirety of the MOU. An MOU does not go into effect unless it is ratified by both the Legislature and affected state employees.

Before Submitting New Labor Agreement to Legislature, Administration Required to Submit Compensation Study. Section 19826 of the Government Code specifies that CalHR shall establish salary ranges for state classifications “based on the principle that like salaries shall be paid for comparable duties and responsibilities.” Further, the law requires that—when establishing or changing pay ranges—“consideration shall be given to the prevailing rates for comparable service in other public employment and in private business.” The law requires that “at least six months before the end of the term of an existing memorandum of understanding or immediately upon the reopening of negotiations under an existing memorandum of understanding” CalHR submit to the union that represents the affected employees and the Legislature “a report containing the department’s findings relating to the salaries of employees in comparable occupations in private industry and other governmental entities.” If this requirement under law conflicts with provisions of a ratified MOU, the law specifies that the ratified MOU shall be controlling.

A requirement that CalHR (or its predecessor agency, the Department of Personnel Administration [DPA]) submit a compensation study to the Legislature has existed under Section 19826 since 2001. Originally, the requirement was for the administration to submit the compensation study for all state employees with the Governor’s budget on January 10 each year. However, Chapter 465 of 2003 (SB 624, Committee on Public Employment and Retirement) amended the law so that the compensation study for a particular bargaining unit is due six months before the unit’s MOU expires. According to the bill analysis, Chapter 465 made this change to Section 19826 based on DPA arguments that an annual report is not necessary because collective bargaining for successor MOUs does not occur annually for all bargaining units. Clearly, the intent of the current reporting requirement is for the compensation study to be a resource used during the collective bargaining process.

Additional Data Points Provide More Context for State Employee Compensation Levels. Although a compensation study provides important information to contextualize state compensation in the labor market, other factors should be considered when determining whether the state provides adequate and reasonable compensation to attract and retain qualified employees. These other factors include quantifiable information such as the share of established positions that are vacant; the number of qualified applicants per posted position; or the number of qualified applicants for a required training program, like a peace officer academy. In addition, more qualitative information can be helpful, such as job satisfaction surveys or information from hiring managers that there could be a problem recruiting and retaining people. Unfortunately, these other sources of information are not always available during our ten-day review. Accordingly, the compensation study is one of the main tools we use in our analysis.

Legislature Expected to Consider MOUs for Eight Bargaining Units in 2020. In December 2019, the administration submitted to the Legislature a proposed MOU between the state and Bargaining Unit 18 (Psychiatric Technicians). By July 2020, the MOUs with seven other bargaining units will expire—Units 2 (Attorneys and Hearing Officers), 6 (Correctional Officers and Parole Agents), 9 (Professional Engineers), 10 (Scientists), 12 (Craft and Maintenance Workers), 16 (Physicians, Dentists, and Podiatrists), and 19 (Health and Social Services Professionals). We expect the Legislature will be asked to consider successor MOUs for these seven agreements before the end of the legislative session in August.

Three Recent Compensation Studies Identify Lag in State Compensation for Attorneys. In addition to the official compensation study compiled by CalHR, two other compensation studies (one conducted by the California Department of Justice and the other conducted by the University of California at Los Angeles) provided to us by the union that represents attorneys (California Attorneys, Administrative Law Judges, and Hearing Officers in State Employment [CASE]) identified significant lags between state attorney compensation and attorneys employed by local governments. Statewide, the studies found that state attorney compensation lagged local government compensation by between 10 percent and 23 percent. The studies identified greater lags in high cost-of-living regions of the state ranging from 17 percent to 30 percent. For specific information about the findings of these three compensation studies, please refer to our analysis of the 2019 Unit 2 MOU. The variation in the findings of the studies likely is due to methodological differences and the level of specificity of each study. However, the overall conclusion of the studies are the same: recent studies (using data from 2017, 2018, and 2019) identify a significant lag in state attorney compensation compared with local governmental employers. On the whole, based on the findings of these studies as well as vacancy data on attorney classifications, we think there is sufficient evidence that Unit 2 attorneys are compensated at levels lower than their local government counterparts and that this lag may result in recruitment and retention issues.

Since 2014, Unit 2 MOU Has Included Commitment From State to Work to Reduce Lag. Although the administration has not agreed to compensation increases that address the lag in attorney compensation, it has agreed that a lag exists since 2014. Specifically, a provision (Provision 15.9) has been in the Unit 2 MOU since 2014 that suggests that the state and union agree that the lag in compensation exists and that it should be addressed. Specifically, this provision (titled “Salary Gap and Statewide Legal Professional Classification Issue”) requires CASE and the state to begin negotiating a successor agreement no later than six months prior to the expiration of the MOU and specifies that the parties will begin negotiations “with the intent of developing a joint economic proposal for the successor MOU, designed to significantly reduce the pay disparity, if economically feasible as determined by the State, for CASE members in comparison to other public sector legal professionals.” Despite the strong fiscal position of the state in recent years, the pay disparity between Unit 2 members and their local government counterparts persists.

Current Agreement Includes Provision to Wave CalHR Compensation Study for One Year. The current MOU includes a provision (Article 15.7) that clearly establishes that no compensation study will be produced in 2020 based on the recognition that the most recent Unit 2 CalHR compensation study was relatively recent and the term of the agreement is only one year. Specifically, the language states:

In January 2020, the parties will meet to explore the components and methodology for conducting a salary survey. Nothing in this section shall require the State to modify their existing total compensation methodology.

Last Unit 6 Compensation Study—From 2013—Showed State Leads by 40 Percent in Compensation for Correctional Officers. The last compensation study for Unit 6 was conducted using data from 2013 (the report was produced in 2015). That survey determined that correctional officers represented by Unit 6 received total compensation that was 40 percent higher than their local government counterparts. Since the time that the compensation study was released in 2015, the Legislature ratified Unit 6 MOUs in 2016 (the 2016 MOU), 2018 (the 2018 MOU), and 2019 (the 2019 MOU).

Administration Completed, but Will Not Submit to the Legislature, a 2018 Compensation Study… As we describe in greater detail in our analysis of the 2019 MOU, the 2016 MOU included language that (1) established criteria for the union that represents Unit 6 (California Correctional Peace Officers’ Association [CCPOA]) and the administration to meet to establish the methodologies that CalHR would use before CalHR conducted its compensation study and (2) allotted a full year for the union and the administration to meet and for CalHR to complete and submit to the Legislature and union the study six months before the 2016 MOU expired.

When we reviewed the 2018 MOU, CalHR informed us that (1) the administration and CCPOA met beginning August 2017 and reached a consensus on the study’s methodology by mid-October 2017, (2) the survey was mailed to six county employers in mid-October 2017, (3) CalHR completed a draft compensation report by mid-February 2018, (4) CalHR shared a draft report with CCPOA, (5) CCPOA had questions about how the agreed upon methodology was applied in the study, and (6) CalHR agreed not to submit to the Legislature the 2018 compensation study until CCPOA had completed its review. Two years later, CalHR indicates that the union and administration still have not resolved their differences on the compensation study and do not plan on submitting to the Legislature the 2018 study. 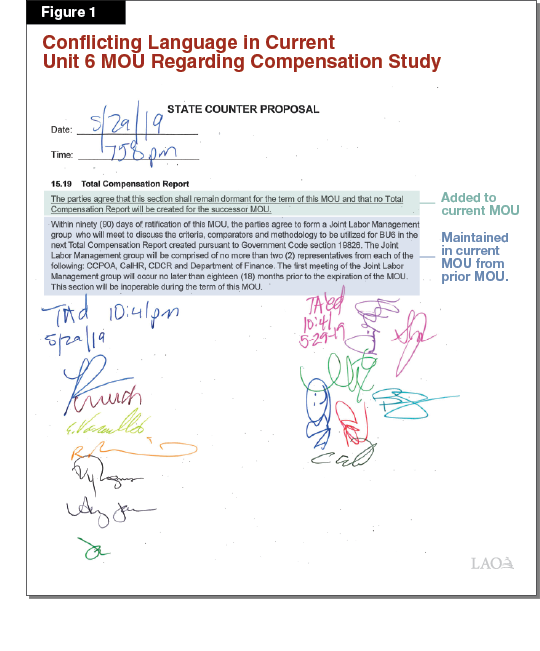 Increases to Compensation for Current Employees Has Fiscal Effects for Years to Come. The rank-and-file employees and managers associated with the eight bargaining units with MOUs that the Legislature likely will consider in 2020 account for 37 percent of the state workforce and 58 percent of the state’s General Fund payroll costs. Although some MOUs are in effect for only one year, more commonly MOUs are multiyear agreements in effect for at least two years. Through these agreements, the Legislature will be asked to establish the state’s salary and benefit levels for a majority of the state’s General Fund payroll for the next few years. Multiyear agreements could lock in General Fund cost increases during a downturn, limiting the Legislature’s options to contain General Fund costs. In addition to near-term fiscal considerations, salary increases have very long-term fiscal effects as (1) salary increases compound and (2) pension benefits ultimately are based on salary.