This post summarizes recent federal legislative and other actions to allocate funding to respond to the coronavirus disease 2019 (COVID-19).

Federal Legislation and Actions Provided for Coronavirus-Related Funding. Recent federal legislation has directed funding to states, local governments, and other entities to respond to the COVID-19 emergency. This legislation includes: the Coronavirus Preparedness and Response Act; the Families First Coronavirus Response Act; and the Coronavirus Aid, Relief, and Economic Security (CARES) Act. In addition, the federal emergency declarations also provide additional funding to states and local governments to reimburse them for certain costs. In recent days, Congress also passed the Paycheck Protection Program and Health Care Enhancement Act, however, we have generally not included the effects of this most recent legislation in this post.

How Federal COVID-Related Funding Will Flow to Californians. As shown in Figure 1, we categorize federal funding according to the two major channels through which they reach Californians. These channels are: 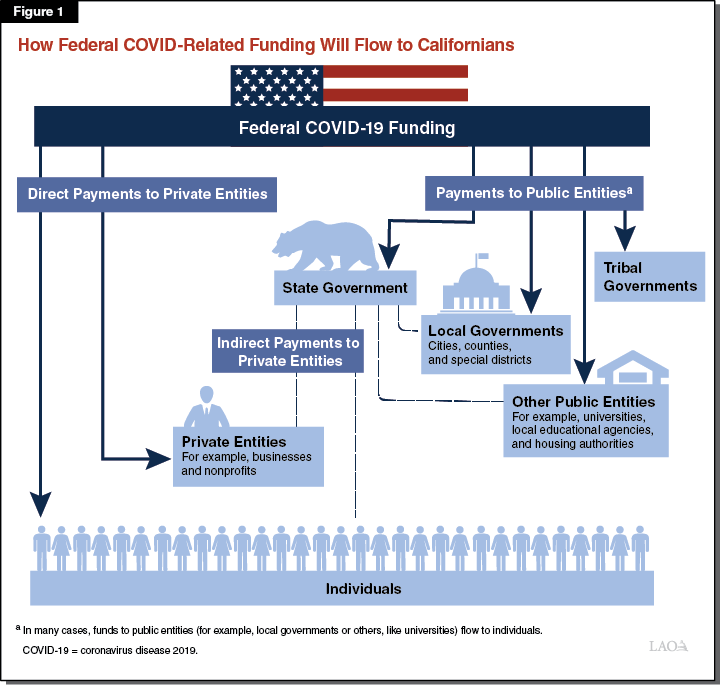 Estimates in This Post Reflect Our Current Understanding. The tables in this post reflect our best estimates and current understanding. Where possible, we rely on estimates from a relevant state department or directly from the federal government. However, in many cases, the estimates of amounts that will flow to California are still unknown or could continue to change. For example, in some cases, federal funding will be provided on a competitive grant basis, meaning that the eligible entities will not know how much funding they will receive until the grant applications are accepted. In other cases, the amount of funding will depend on unpredictable factors, like the number of individuals who participate in a program or broader economic or public health conditions.

This section is organized according to the user or beneficiary of the funds, not the initial recipient. For example, some federal funds provided for education will be passed through California’s Department of Education—at the state level—but will be used by school districts. Those funds are included in the figure describing funds used by “other public entities.” Similarly, cash and cash-like benefits that pass through the state government, but are allocated to individuals—such as unemployment insurance benefits—are shown in the figure related to “individuals.”

Funding to State Government. Figure 2 shows our estimate of federal COVID-19-related funding that the state will use for administration of state programs and state-provided services. Our current estimate of the total, quantifiable funding to the state government is roughly $20 billion. This amount is likely to evolve substantially in the coming months. The two largest allocations provide the broadest budgetary benefit for the state. First, we estimate the state will receive about $9.5 billion from the Coronavirus Relief Fund (CRF) to respond to the costs of the public health emergency (which we discussed in more detail in this post). The federal government has released specific guidance on the possible uses of these funds. Second, the state anticipates receiving about $5.3 billion in federal reimbursements for the currently estimated $7 billion in direct costs of COVID-19 (reflecting a 75 percent reimbursement rate). The state will receive these reimbursements from the Federal Emergency Management Agency (FEMA) pursuant to the federal disaster declarations. The precise amount of these funds will ultimately depend on the state’s actual costs to respond to COVID-19.

Funding to State Government for Administration and State‑Provided Services

Funding to Other Public Entities

Funding to Tribal Governments. Figure 5 shows our estimate of federal COVID-19-related funding that tribal governments will use for the administration of programs and to provide services. Similar to state and local governments, tribal governments are eligible for CRF funds, with an estimate of $63 million in CRF funding available to tribes in California. Figure 5 excludes a some funding amounts that fall below the $1 million threshold for these figures.

Payments to Private Entities (Through State Government). Figure 6 shows our estimate of federal COVID-19-related funding that will flow through the state government, but will be used by private entities. In this case, private entities include, for example, domestic violence service providers, food banks, and other nonprofits.

Income Support and Cash Assistance to Individuals. Figure 7 shows our estimate of federal COVID-19-related funding that will flow through the state government or other public entities, but will be used by individuals. The figure excludes federal funding that will flow directly to individuals (those funds are described qualitatively in the next section). We define funds as “used by individuals” if the benefit is cash or cash-like, such as financial assistance for food or housing. (The figure therefore excludes “in-kind” benefits, which are shown in other figures in this post.) As the figure shows, the largest amount provided in this category are the increased unemployment insurance (UI) benefits for all standard recipients and the expanded UI benefits for nonstandard recipients. (We describe these funding amounts in more detail here.)

Income‑Support and Cash Assistance to Individuals (Provided Through State Government)

This section describes, qualitatively, the largest components of federal COVID-19-related funding that we expect to be allocated directly to private entities and individuals in California. (These are the amounts that are illustrated on the left side of Figure 1.)

Cash Assistance to Individuals. The largest single source of federal payments direct to individuals are for broad-based cash assistance, which was provided in the CARES Act for most Americans. Under the CARES Act, adults earning less than $75,000 in their most recent tax filing are generally eligible for a one-time cash payment of $1,200, and $500 for each child. These payments are phased out starting at $75,000 of income for single adults with no children, such that a single adult is no longer eligible for assistance if they earn $99,000 or more. (We described this cash assistance in greater detail in this post.) Using tax data from 2017, we roughly estimate about 14 million California households will be eligible to receive a total of about $25 billion to $30 billion in direct cash assistance from the CARES Act.