In recent months, the federal government has enacted several pieces of legislation aimed at responding to the coronavirus disease 2019 (COVID-19). Three of these bills—the Coronavirus Preparedness and Response Supplemental Appropriation Act (enacted March 4); the Coronavirus Aid, Relief, and Economic Security Act (enacted March 27); and the Paycheck Protection Program and Health Care Enhancement Act (enacted April 24) include substantial amounts of funding for research and development (R&D). In this post, we provide background on R&D funding nationally and in California, describe the R&D provisions in these three pieces of federal legislation, and highlight some key related issues for the Legislature to consider.

Private Industry Is Largest Part of R&D Sector. According to the National Science Foundation (NSF), a total of $548 billion was spent on R&D nationwide in 2017. As Figure 1 shows, private industries collectively spent the greatest amount on R&D, followed by universities, then federal agencies. Private industry also provided a majority of funding for R&D. Other entities that conduct and fund R&D include nonprofit entities and state agencies. Private companies generally focus their R&D activities on developing new products and services. By comparison, universities (public and private), government agencies, and nonprofit organizations tend to focus on basic and applied research. (The nearby box describes the basic stages of the R&D process.) 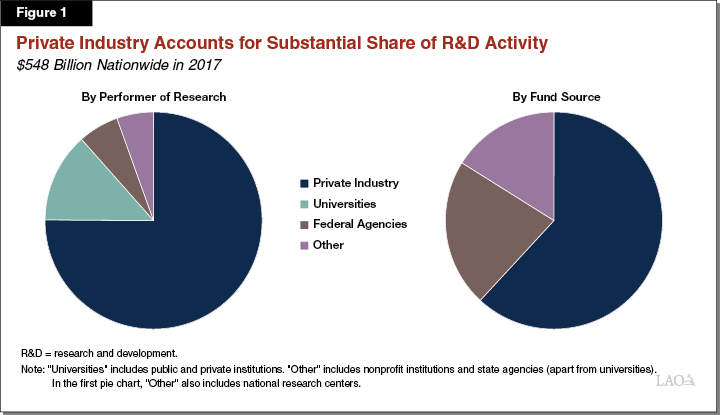 The research and development (R&D) process tends to begin with original research in an area (for example, trying to understand the origins of a disease), eventually progressing to development of a tangible product or service (for example, a treatment to alleviate the conditions of someone with the disease). The first stage in this process usually entails “basic research,” which is theoretical in nature, focusing on discovering new knowledge in a field. The next stage typically entails “applied research,” which takes what is known and applies it to solving a specific problem. The third stage, “development,” occurs when a promising idea for a product (such as a medical treatment) emerges from applied research. In the medical field, the development stage typically includes animal and human clinical trials to assess the effectiveness and side effects of new products. The federal Food and Drug Administration approves pharmaceutical products that have been found safe through clinical trials. The time line from original research in a field to manufacturing a new, related product can stretch across many years.

California Has Sizeable R&D Sector. Among states, California conducts the largest amount of R&D. According to the NSF, in 2017 $151 billion was spent on R&D in California, accounting for more than one-quarter of national R&D spending. California’s share of national R&D spending is notably higher than its share of the national gross domestic product (14 percent) and its share of the U.S. population (12 percent). The composition of California’s R&D sector is roughly similar to other states, with private industry comprising the largest share of spending and funding.

Federal Government Is Primary Source of Public R&D Funding Nationally. The federal government provided a total of $121 billion in R&D funding in 2017—comprising over 95 percent of all public R&D funding. (This amount excludes federal tax credits. According to the Internal Revenue Service, in tax year 2014, the most recent year with publicly available data, corporations claimed a total of $12.6 billion in federal tax credits for their R&D activities.) Many federal agencies support R&D, but support is concentrated in five federal agencies (Figure 2). Research funding provided by these five agencies generally aligns with their missions. For example, funding from the National Institutes of Health (NIH) supports research in the life sciences and health sciences. About 75 percent of federal R&D funding is issued externally to businesses, universities, and other nonprofit institutions. The remaining 25 percent supports R&D that is conducted by federal employees in federal facilities. Of the funding issued externally, a portion is allocated through competitive grants and a portion through contracts with select national research centers (for example, the Lawrence Berkeley National Laboratory administered by the University of California). 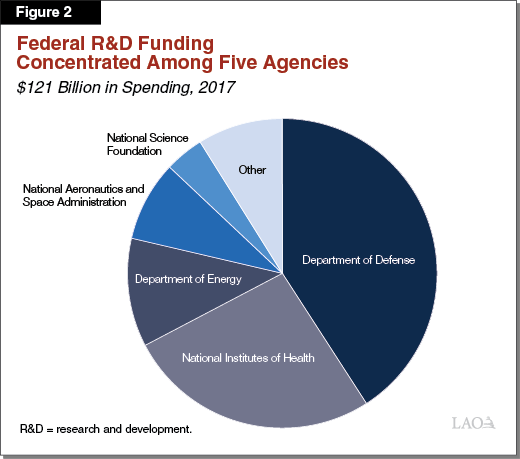 California Supports Several Relatively Small State R&D Programs. Similar to other states, state government in California provides a much smaller amount of R&D support compared to the federal government. In 2017‑18, the state spent $3.4 billion for R&D. Around half of this amount was spent on tax credits for California corporations engaging in R&D activities. The other half was spent on R&D programs at the University of California (UC) and several other state agencies. About 80 percent of direct state R&D support for UC comes from the General Fund. UC tends to have some discretion in what research it supports with this funding. The remainder of its direct state R&D support comes from various special funds. It must use this funding for specific purposes—most notably, to undertake tobacco-related health research and breast cancer research. In addition to this direct support, the state provides UC with billions of dollars in General Fund support for its general operations and facilities, which encompasses its on-campus research activities. Other state agencies with notable R&D programs include the California Institute for Regenerative Medicine and the California Energy Commission. These agencies, in turn, generally fund contracts and grants to universities and other entities to conduct research. UC campuses, for example, receive support through some of these programs.

Largest Amount Is for Biomedical Research. The three acts provide the Office of the Secretary of Health and Human Services a combined $55 billion broadly to develop, purchase, and stockpile COVID-19 tests, treatments, and vaccines. Of this aggregate amount, $4.5 billion is appropriated to the Biomedical Advanced Research and Development Authority specifically for R&D purposes. This federal agency focuses on developing countermeasures against bioterrorism, nuclear threats, and emerging diseases. The $4.5 billion likely will be used for a mix of internal and external research projects across the country. (Some of the remainder of the $55 billion also could be used for R&D, but the exact amount is not yet known.)

Next Largest Amount Is for Health Science Research. The three acts provide a combined $3.6 billion to NIH. Of this amount, 72 percent is allocated to two of NIH’s 27 institutes and centers—the National Institute of Allergy and Infectious Diseases and the National Institute of Biomedical Imaging and Engineering. Funds provided to NIH broadly are to support internal and external R&D on COVID-19 matters, with a portion of the funding designated for specific R&D purposes. For example, of the amount going to National Institute of Allergy and Infectious Diseases, at least $156 million must be spent for federal research facility projects (largely to upgrade existing facilities and construct new facilities).

Department of Energy Research Centers Receiving Additional Support. The March 27th act also provides the Department of Energy $100 million to support the national laboratories that it sponsors. Specifically, these funds are for those research laboratories that are available for use by external researchers. Access to these user facilities is free of charge to researchers working on nonproprietary projects. (Fees are charged when a project is proprietary.) In California, several of these types of user facilities are located at the Lawrence Berkeley National Laboratory and the SLAC National Accelerator Laboratory (located in Menlo Park and operated by Stanford University).

Smaller Amounts Provided to Numerous Other Agencies. The purposes of these funds vary by agency, with some funds much more targeted than others. For example, the amount provided to the National Science Foundation ($75 million) may be used “to support grants and other necessary expenses,” whereas the amount provided to the Environmental Protection Agency ($1.5 million) is for research on methods to reduce the risks of transmitting COVID-19 through contaminated surfaces or materials.

California Entities Likely Will Receive Portion of R&D Funding. For most of the provisions described above, federal agencies seem to have considerable flexibility to determine the mix of internal and external research to support. Given this flexibility, estimates are not available for either the amount of funding that ultimately will be provided externally or that will flow to California specifically. As California R&D entities usually receive a sizable portion of federal external R&D funding, we would expect them to receive at least some of the R&D funds—perhaps in the range of hundreds of millions of dollars to the low billions of dollars.

Benefits of COVID-19 R&D Might Not Be Immediate. According to the Food and Drug Administration, human clinical trials typically take several years to complete, and most experimental products being tested in clinical trials do not end up meeting safety and effectiveness standards. Some types of R&D projects, however, have higher success rates and potentially can begin accruing benefits more quickly. For example, R&D focused on technological innovations to hasten the manufacturing of medical tests could yield more immediate results. Given the high priority and attention currently devoted to developing tests, treatments, and vaccines for COVID-19, traditional R&D time lines might not be good indicators of when the benefits from COVID-19-focused R&D will emerge. Staff at NIH, for example, have suggested that COVID-19 vaccines might be available for public distribution as early as January 2021.

Rationale for More Extensive Federal R&D Role Is Much Stronger Than for State R&D Role. The direct benefits of new discoveries and inventions typically extend across state, and even national, lines. Recognizing this potentially broad public benefit, the federal government, rather than state and local governments, typically takes the lead in supporting R&D. The rationale for a more involved federal role is especially strong for the COVID-19 pandemic, as it reaches across state and national borders.

Recommend the State Take a Targeted Approach to R&D. With its deteriorating budget condition, the state likely will find augmenting its support for R&D difficult. The state might even have to cut spending in this area. Regardless of the level of support the state ultimately provides for R&D, we encourage the Legislature to link state R&D funding with specific state R&D objectives. As a guiding principle, we believe state-funded R&D should be designed to yield benefits that are particularly important for California. Given the considerable federal focus on developing COVID-19 testing, treatments, and vaccines, the state could focus on other R&D objectives that specifically benefit Californians. As California’s experience with the COVID-19 outbreak deepens and lengthens, state-specific R&D objectives might arise. Were this to be the case, the state at that time might explore whether existing R&D spending could be repurposed to meet the emerging challenges.