The coronavirus disease 2019 (COVID-19) public health pandemic has impacted social and economic activity in the state. Among other effects, reduced business activity and stay-at-home orders have resulted in less driving. Consequently, the state has experienced a significant reduction in gasoline and other tax revenues that support funding for highways, local streets and roads, and transit. This post discusses how the COVID-19 pandemic is affecting state transportation revenues, as well as how the estimated declines in transportation revenues will impact major state transportation programs. While some programs will be impacted more immediately, others should have sufficient budgetary reserves to sustain them in the near term. However, the pandemic and its effects are still ongoing, and the ultimate impacts on state transportation programs will be determined by the course of the pandemic and the state’s economic recovery.

Funding for California’s transportation system comes from numerous local, state, and federal sources. State funding comes from various fuel taxes and vehicle fees that are dedicated to specified transportation purposes—such as highways, local streets and roads, and transit. Figure 1 provides a summary of the various state taxes and fees and their general uses, which we describe in more detail below.

Not shown in the figure, the state also allocates a portion of its cap-and-trade auction revenues to transportation programs such as high-speed rail, active transportation, and capital assistance for transit agencies to reduce greenhouse gas emissions. For more information on the impact of COVID-19 on cap-and-trade auction revenues, please view our post Addressing Revenue Uncertainty in the 2020‑21 Cap-and-Trade Expenditure Plan.

Reduction in Vehicle Miles Traveled (VMT) and Fuel Consumption. Reductions in economic activity, stay-at-home orders, and increases in telecommuting have reduced driving in the state. As shown in Figure 2, VMT significantly reduced in the months after the Governor signed Executive Order N-33‑20 in March, which ordered residents to stay home with certain exceptions. At its peak decline, total VMT in April 2020 was 41 percent lower than April of the previous year. While VMT increased in the subsequent months, VMT in June was still down 14 percent when compared to June 2019. Reductions in VMT have led to corresponding decreases in fuel consumption in the state. The state tracks consumption data through monthly tax filings, and while preliminary data shows declines in fuel consumption, the data is not easily comparable to prior periods due to tax filing delays that were allowed by the state during the pandemic. Consistent with this data, national reports indicate that consumption levels for gasoline have decreased significantly since the pandemic began, while diesel consumption has been affected to a lesser degree. This is likely a result of diesel being the predominant fuel for the trucking industry, which has continued to be needed to distribute consumer and other goods during the pandemic, including for increased home deliveries. The overall decrease in fuel consumption has a direct impact on revenues collected from the gasoline excise tax and the diesel excise and sales taxes. 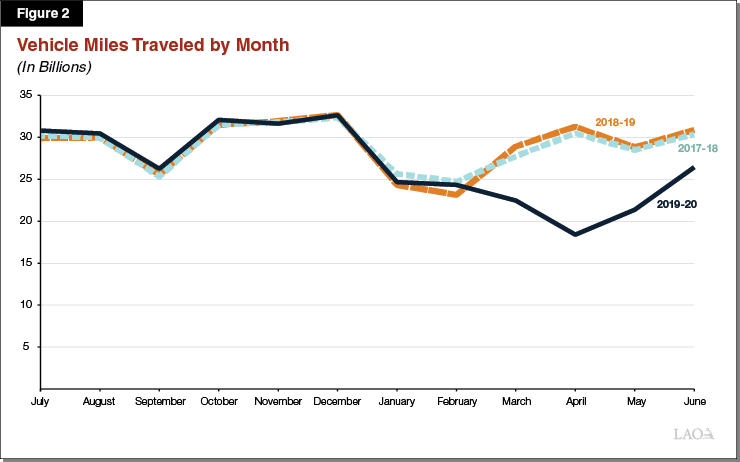 Estimated Decrease of $619 Million in 2019‑20. In January 2020—prior to the COVID-19 pandemic—the administration estimated that state fuel tax and vehicle fee revenues would total $12.3 billion in 2019‑20. However, as a result of the effects discussed above, the enacted state budget (adopted in June 2020) assumes estimated transportation revenues were $619 million (5 percent) lower in 2019‑20, as shown in Figure 3. Most of the decline is due to an estimated $556 million (8 percent) reduction in gasoline excise tax revenues compared to previous estimates. 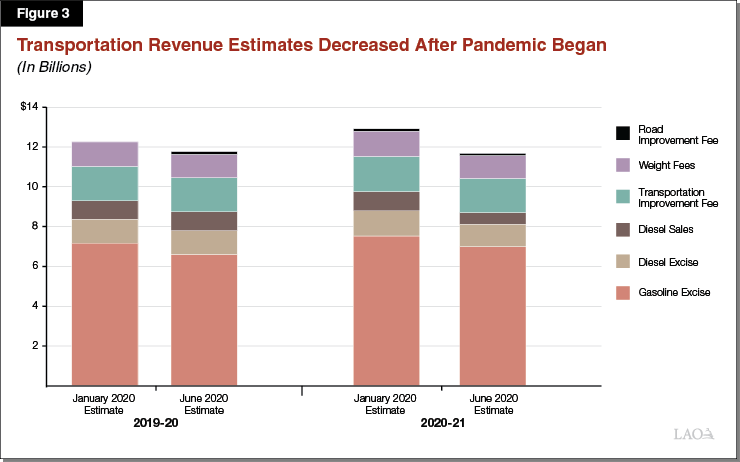 2020‑21 Estimates Are $1.2 Billion Lower Than Previous Estimates. Prior to the COVID-19 pandemic, the administration estimated that state transportation revenues would increase to $12.8 billion in 2020‑21. However, the enacted budget assumes that state transportation revenues will be about $11.6 billion in 2020‑21, roughly the same level as the revised 2019‑20 estimate. This is a reduction of $1.2 billion (10 percent) compared to previous estimates. Three-quarters of the reduction comes from lower revenue projections for the gasoline excise tax and diesel sales tax. Current revenue estimates assume lower fuel consumption, fuel prices, and paid vehicle registrations. However, these impacts are largely offset by the annual inflation adjustments to the fuel excise taxes and vehicle fees, which explains why the total year-over-year revenue difference is expected to be marginal. (Weight fees are not adjusted for inflation.) For instance, the gasoline excise tax increased by 3.2 cents per gallon on July 1, 2020.

Caltrans Highway Rehabilitation Work Stable. Caltrans maintains and rehabilitates the state’s highway system through two programs—the Highway Maintenance Program and the State Highway Operation and Protection Program (SHOPP). The Highway Maintenance Program performs activities such as filling potholes and applying thin overlays to pavement, while SHOPP is a four-year program of capital projects that rehabilitate or reconstruct highways when they reach the end of their useful life. State funding for both programs primarily comes from the excise taxes on gasoline and diesel and the transportation improvement fee. Despite the projected revenue losses from these sources, Caltrans has indicated that large reserves in the transportation accounts that support these programs will be able to offset these losses in 2019‑20 and 2020‑21. The 2020‑21 Budget Act provides roughly $2.1 billion for maintenance and $5 billion for capital costs associated with SHOPP and other state highway programs, roughly the same level of support proposed by the Governor in January.

State Transportation Improvement Program (STIP) Allocations Largely Stable. STIP is one of the state’s main programs for improving transportation systems—including state highway, local streets and roads, and transit improvements—generally by increasing their capacity. Funding for STIP comes from a specified portion of the gasoline excise tax, with 75 percent allocated to counties on a formula basis for projects they select and 25 percent to Caltrans for interregional projects. The program is a five-year plan of projects that the California Transportation Commission approves every two years based on revised revenue estimates and project proposals. While the current revenue estimates would result in less funding for STIP in 2019‑20 and 2020‑21, losses will likely be reflected in future STIP cycles when the plan is updated, probably resulting in fewer projects being approved for funding in future years. This leaves the anticipated $586 million in STIP allocations in 2020‑21 stable.

Shared Revenues for Local Streets and Roads Lower Than Previous Estimates. The state directly distributes a portion of its transportation revenues to cities and counties for local streets and roads purposes, also known as “shared revenues.” The amount distributed is based on statutory formulas that provide funds from the gasoline and diesel excise taxes, transportation improvement fee, and road improvement fee. Shared revenues for cities and counties are estimated to increase from $2.6 billion in 2019‑20 to $2.8 billion in 2020‑21. However, this is $256 million (9 percent) less than what was previously estimated for 2019‑20 and $231 million (8 percent) less than previously estimated for 2020‑21.

State Transit Assistance (STA) Severely Impacted. The state provides funding to support transit agencies through several programs. STA—which is funded with 73 percent of the revenue collected from the diesel sales tax—makes up the largest share of state funds provided to transit agencies. The program distributes funding on a formula basis to transit agencies for operational and capital support. While state funding for STA is estimated to be relatively stable in 2019‑20, the program is expected to face significant funding reductions in 2020‑21 as a result of major declines in diesel sales tax revenues. The 2020‑21 Budget Act estimates that STA funding will be $414 million in 2020‑21, which is a $265 million (39 percent) year-over-year reduction. STA reductions are among the many revenue losses transit agencies will be facing. However, some of the losses will be offset from one-time funding provided to transit agencies under the Coronavirus Aid, Relief, and Economic Security (CARES) Act (H.R. 748). (Please view our online post Federal Stimulus Funds for Transit for more information on CARES Act funding for transit agencies in the state.)

Other Transportation Impacts of Pandemic. In addition to the financial and programmatic impacts that are the focus of this post, our office recognizes that the pandemic has had other impacts related to transportation. For instance, the significant reductions in driving allowed Caltrans and other transportation agencies to accelerate projects. In addition, national reports have indicated that reductions in driving resulted in significant decreases in carbon dioxide emissions from the transportation sector in April 2020, which have been offset by some increases in May as driving increased. Lastly, the economic impacts stemming from the pandemic have created a more favorable bidding environment, reducing the cost for some Caltrans projects in recent months. For example, the department has indicated that in July 2020, the lowest bids for construction projects were roughly 20 percent lower than the department’s previous estimates. All of these impacts will be important to monitor as the pandemic unfolds, and, in a few cases, the state might be able to take advantage of these effects. For example, the Legislature passed SB 1351 (Beall) in August 2020, which authorizes a new revenue bond to accelerate SHOPP projects, in part to take advantage on the current bidding environment.

Actual Revenues in 2020‑21 Will Depend on the Pandemic. While the 2020‑21 budget attempted to reflect the potential effects of COVID-19 on state transportation revenues, these are only projections based on what the administration and Legislature knew at the time the budget was enacted. The actual revenues—and the ultimate effects on transportation programs—will be determined by various factors, including VMT, fuel prices, and overall economic activity, all of which are uncertain and will be influenced by the state’s and public’s responses to the pandemic. The longer the COVID-19 pandemic—and its effects on the state’s economy—persist into the current year, the higher the risk that transportation revenues will be even lower than current estimates. Our office will continue to monitor trends in fuel consumption, prices, and vehicle registrations and will provide an update as part of our analysis of the Governor’s 2021‑22 budget proposal, which will be released in January.