State Wildfire Response Costs Estimated to Be Higher Than Budgeted

The Department of Forestry and Fire Protection (CalFire) is responsible for wildland fire protection in State Responsibility Areas (SRAs), which are primarily privately owned wildlands that encompass about one-third of the state. CalFire employs around 4,000 permanent and 2,500 seasonal firefighters, operates an aviation program (aircraft, helicopters, and air tankers), and runs about 250 fire stations and air attack bases. In this post, we discuss how the extreme wildfire season of 2020 is impacting the state budget.

CalFire Budget Supports Base and Emergency Wildfire Response. The 2020‑21 budget includes $2.5 billion for CalFire, most of which—$2.1 billion—is for wildfire response. (The department also engages in other activities, such as wildfire prevention and forest health.) This budget for wildfire response has two components—the “base budget” and an amount budgeted for emergency fire suppression known as the Emergency Fund (E-Fund). CalFire’s base budget pays for everyday firefighting operations of the department, including salaries, facility maintenance, and other regularly scheduled costs. Included in the base budget are the costs associated with the “initial attack” on a wildfire—that is, the firefighting operations generally undertaken in the first 24 hours of an incident. Notably, the 2020‑21 budget augmented CalFire’s base budget by $85.6 million for additional firefighter and support staffing.

E-Fund Budget Intended to Pay for Large-Incident Firefighting Costs. Once an incident has gone beyond the initial 24 hours and, therefore, will likely exceed the capability of containment by that CalFire unit, costs associated with firefighting are charged to the E-Fund. Such costs as equipment rental, unplanned overtime, inmate crews, and additional air support are charged to the E-Fund for large incidents.

The budget includes a separate General Fund appropriation for the E-Fund—$373 million in 2020‑21. The amount budgeted for the E-Fund each year is an estimate, in part based on the average costs of the large-incident firefighting incidents over the most recent five years. The Legislature approved, as part of the budget, authority for the Director of Finance to augment the item to pay for emergency fire suppression costs following notification of the Joint Legislative Budget Committee. If the E-Fund is not fully utilized in a given year, the remainder reverts to the General Fund. The structure of the E-Fund is particularly important in a wildfire-prone state like California. It sets aside funding to respond to wildfires that will inevitably occur and is flexible to account for the inherent unpredictability regarding the number, scale, and timing of those wildfires.

Some E-Fund Allocated to Bolster Baseline Response Resources. In July, the Governor announced that CalFire would bolster its baseline resources to better prepare for the coming wildfire season, in part by hiring an additional 858 seasonal firefighters and six California Conservation Corps (CCC) crews through October. According to the Department of Finance, these additional firefighting resources were to be funded from the E-Fund and cost a total of $97 million, including $72.4 million for the firefighters and CCC crews and $24.6 million for contracts for additional air support.

2020 Wildfire Season Has Been Among Worst in State History

As of October 11, almost 8,500 wildfires had started in California in 2020. While this is not an unusually high number of wildfires, the number of acres burned in these wildfires far exceeds recent trends. As shown in Figure 1, over 4 million acres have burned in wildfires so far in 2020, more than doubling the acreage burned in the next worst year of the past few decades (2018). 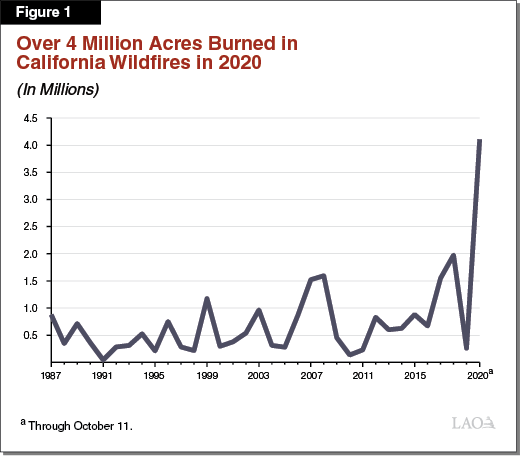 Importantly, several of the 2020 wildfires have been among the largest and most damaging since California has begun consistently tracking these statistics in the 1930s. This includes the August Complex fire (Tehama County), which has burned over 1 million acres, making it the largest recorded fire in the state’s history. The North Complex fire (Butte, Plumas, and Yuba Counties) destroyed nearly 2,400 structures, making it the fifth most destructive fire in state history. (The most destructive wildfire was the 2018 Camp Fire in Butte County, which destroyed about 18,800 structures.) Figure 2 shows that 6 of the 20 largest and 6 of the 20 most destructive wildfires in the state’s recorded history have occurred in 2020. 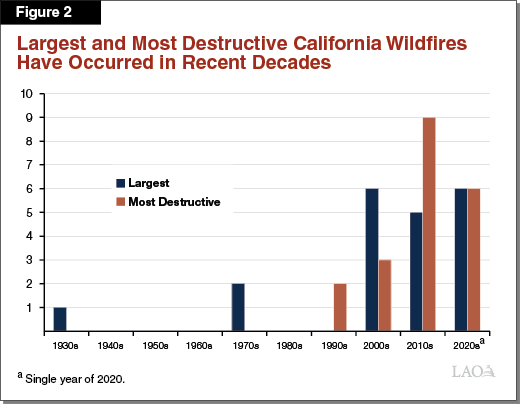 As bad as the 2020 wildfire season has been to date, California’s traditional wildfire season is not over. Historically, wildfire season runs through the fall with fire activity affected by factors such as rainfall and wind patterns. In recent years, some large and destructive wildfires—such as the Thomas Fire (Ventura and Santa Barbara Counties) in 2017—have occurred as late as December.

The budget requires CalFire to provide a quarterly report of actual expenditures from the E-Fund to the Legislature. The report for the first quarter of 2020‑21 was sent to the Legislature on October 14. According to the report, CalFire spent $893 million from the E-Fund in the first quarter (including the additional $97 million for enhanced baseline resources authorize by the executive order). Based on historical data, CalFire estimates it will spend an additional $310 million from the E-Fund throughout the remainder of the year. The quarterly notification also proposes to extend the enhanced baseline resources authorized by the executive order—as well as other seasonal staff—through December at an estimated cost of an additional $97 million. In total, therefore, the administration estimates that the state will spend $1.3 billion from the E-Fund in 2020‑21. This is $928 million above the budgeted level. Figure 3 shows CalFire fire protection costs—including baseline and E-Fund expenditures—since 2005‑06. As shown, based on current E-Fund estimates, total CalFire wildfire protection costs will reach about $3.1 billion. Actual costs could be higher or lower depending on wildfire response costs for the remainder of the wildfire season. 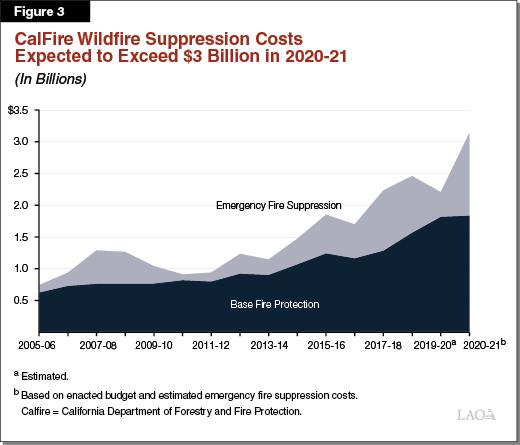 The 2020 wildfire season has taken lives, leveled homes, destroyed habitats, and worsened air quality throughout the state. In addition, the increased firefighting costs come at a time of recent fiscal challenges for the state. The higher E-Fund costs are paid directly from the General Fund, thereby drawing down the state’s Special Fund for Economic Uncertainty (SFEU), which was budgeted at $2.6 billion. While the purpose of the SFEU is to cover unanticipated costs such as wildfires, it is important to note that the budget plan already assumed that a portion of the balance in the SFEU would be needed to address the coronavirus disease 2019 pandemic. (For more information on the state’s overall budget plan, see our The 2020‑21 Budget: Overview of the California Spending Plan.) Additionally, the 2020 wildfires are likely to result in other General Fund costs, including for debris cleanup in affected communities. Given the thousands of structures destroyed, these costs are likely to be in the hundreds of millions of dollars.

Importantly, the state should receive federal funds to cover most—usually about 75 percent—of allowable costs associated with fire suppression for large fires. The federal government has also approved reimbursement for recovery-related costs—such as debris cleanup—for some 2020 fires. In general, there can be a delay—sometimes of several years—before these costs are recovered from the federal government, particularly for debris cleanup costs.

Ultimately, the 2020 wildfires will result in net costs—potentially of a few hundred million dollars—to the General Fund, thereby reducing fiscal resources available in 2021‑22. To the extent that the state is in a poor fiscal condition in 2021‑22, these increased General Fund costs will mean that the Legislature and Governor have to find budget solutions elsewhere, such as through more budget reductions, tax increases, or special fund borrowing. Alternatively, if the state is projected to be in a better fiscal position in 2021‑22, higher expenditures on wildfires will mean less resources available to reverse actions taken to balance the budget in 2020‑21, such as by restoring cuts or repaying special fund loans, or to support other legislative funding priorities. Our office will release our annual forecast of the General Fund condition in November 2020.