Updated 12/10/20: This post has been updated to reflect new reserve levels at UC Santa Barbara.

An Analysis of University Reserves

Since the start of the coronavirus disease 2019 (COVID-19) pandemic and recession, growing interest has emerged in using the universities’ reserves to mitigate the impact of state funding reductions and other campus revenue losses. In this post, we provide a high-level analysis of reserves at the California State University (CSU) and University of California (UC). We first describe the segments’ reserve policies, then examine their reserve levels, next highlight recent developments, and lastly discuss a few issues for legislative consideration.

Universities Maintain Committed and Uncommitted Reserves. Similar to other colleges and universities, CSU and UC maintain reserves. They commit part of these reserves for planned one-time activities, which commonly include facility maintenance and capital projects, new academic program development, and faculty recruitment. In addition, CSU and UC leave some of their reserves purposefully uncommitted to prepare for future recessions or other unforeseen events that could disrupt their operations. When such disruptions arise, universities might reevaluate some of their previous commitments and consider repurposing the associated reserves. For example, a university might decide to delay a facility project and use the freed-up funds to help it temporarily cover operating costs. These decisions come with trade-offs, as they help universities cover costs in the short term but may hinder progress toward their longer-term objectives.

CSU and UC Maintain Reserves in Core and Noncore Programs. The universities’ core funds (primarily state General Fund and student tuition revenue) support their academic programs. The universities also have noncore funds that support the rest of their activities. For example, the universities collect revenue from their housing, dining, and parking programs. UC also collects revenue from its medical centers. Traditionally, CSU and UC have kept their core and noncore reserves separate—using core reserves for academic purposes and noncore reserves for associated noncore purposes.

CSU Has a Systemwide Reserve Policy. For CSU, state law authorizes the university to establish numerous fund accounts and maintain reserves. State law, however, is silent on the level of reserves that the CSU system or its specific campuses should maintain. Historically, the CSU Chancellor’s Office granted campuses flexibility to determine their own reserve policies. This changed when the Chancellor’s Office adopted a systemwide policy in 2015-16. The systemwide policy sets a target for campuses to maintain uncommitted reserves worth a minimum of three and a maximum of six months of expenditures. This policy applies to campuses’ core operating funds and many of their noncore funds.

UC Delegates Reserve Decisions to Campuses. State law also is silent on the level of reserves that the UC system or its specific campuses should maintain. Unlike CSU, UC has not adopted a systemwide reserve policy. Instead, UC allows its ten campuses to determine their own reserve levels. Campus policies vary but typically aim for uncommitted reserves worth one to three months of expenditures in core funds. In noncore funds, some campuses have slightly higher targets relative to expenditures (holding one or two months of additional reserves). These higher targets are due to noncore programs being self-supporting and potentially more exposed to economic uncertainties.

CSU Has $1.7 Billion in Core Reserves, $1.1 Billion in Noncore Reserves. Figure 1 shows CSU’s reserve levels by fund category (each reflecting a group of fund accounts) at the end of 2019-20—about three months after the start of the COVID-19 pandemic. Total reserve levels (committed and uncommitted combined) were similar to one year earlier. CSU has committed the majority of reserves in each fund category—including 76 percent of reserves in core operations—for planned activities. It has left a small share uncommitted for economic uncertainties. 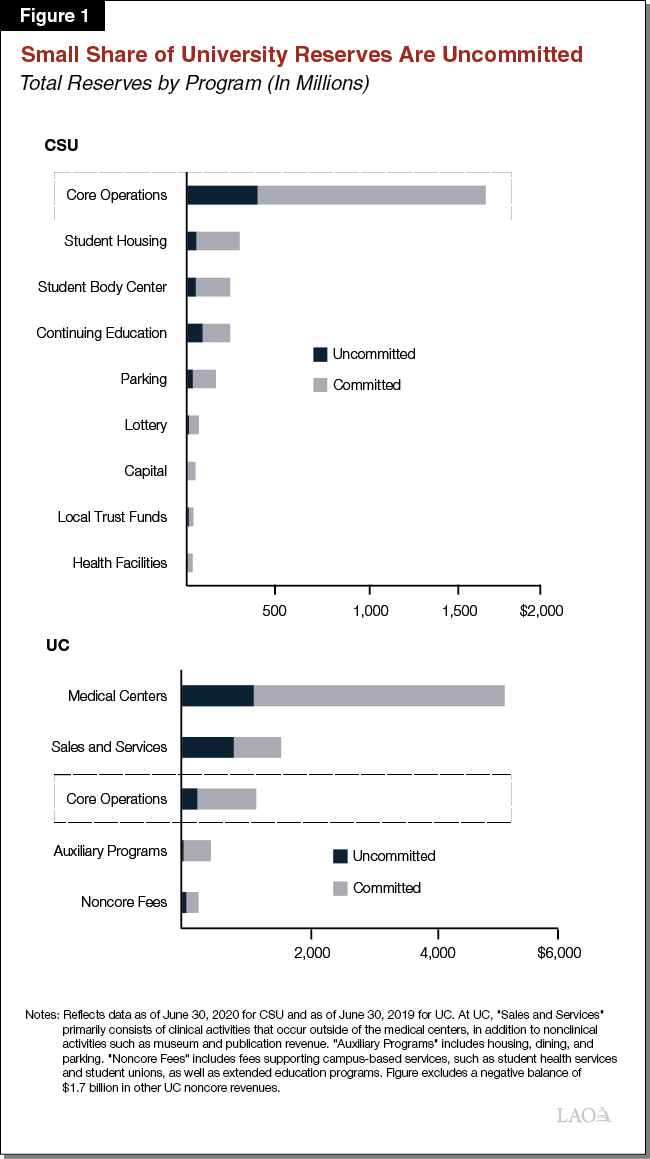 UC Has $1.2 Billion in Core Reserves, $5.8 Billion in Noncore Reserves. The bottom part of Figure 1 shows UC’s reserve levels by fund category at the end of 2018-19 (the most recent data available). The 2018-19 data predates the COVID-19 pandemic, but it serves as a baseline. Similar to CSU, UC has committed most of its reserves—including 77 percent of its core reserves—for planned activities, with a small share uncommitted for economic uncertainties

Prior to Downturn, Core Reserve Trends Differed at CSU and UC. We examined total core reserves (committed and uncommitted combined) relative to expenditures in the four years prior to the COVID-19 pandemic. At CSU, year-end total core reserves increased slightly over this period—from the equivalent of 2.6 months of expenditures in 2015-16 to 2.8 months in 2018-19. At UC, however, year-end total core reserves decreased notably—from 2.6 months of expenditures in 2015-16 to 1.6 months in 2018-19. According to UC, this downward systemwide trend entailed declines in both committed and uncommitted reserves. The reasons for the declines vary among campuses. Some campuses—such as Riverside—increased faculty hiring a few years ago and drew down their committed reserves for faculty recruitment. Other campuses—such as Berkeley—faced budget deficits and drew down their uncommitted reserves in response. At both UC and CSU, uncommitted core reserves equated to less than one month of expenditures at the end of 2018-19, suggesting that both segments entered the current downturn with reserves below their target levels. 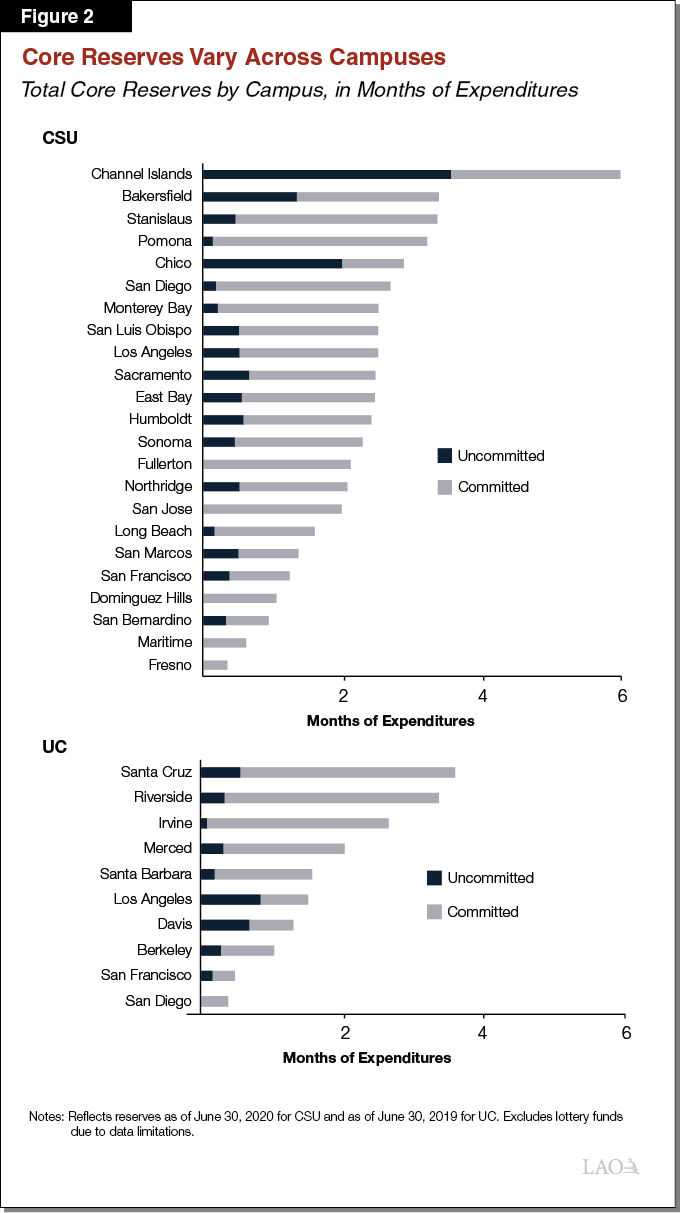 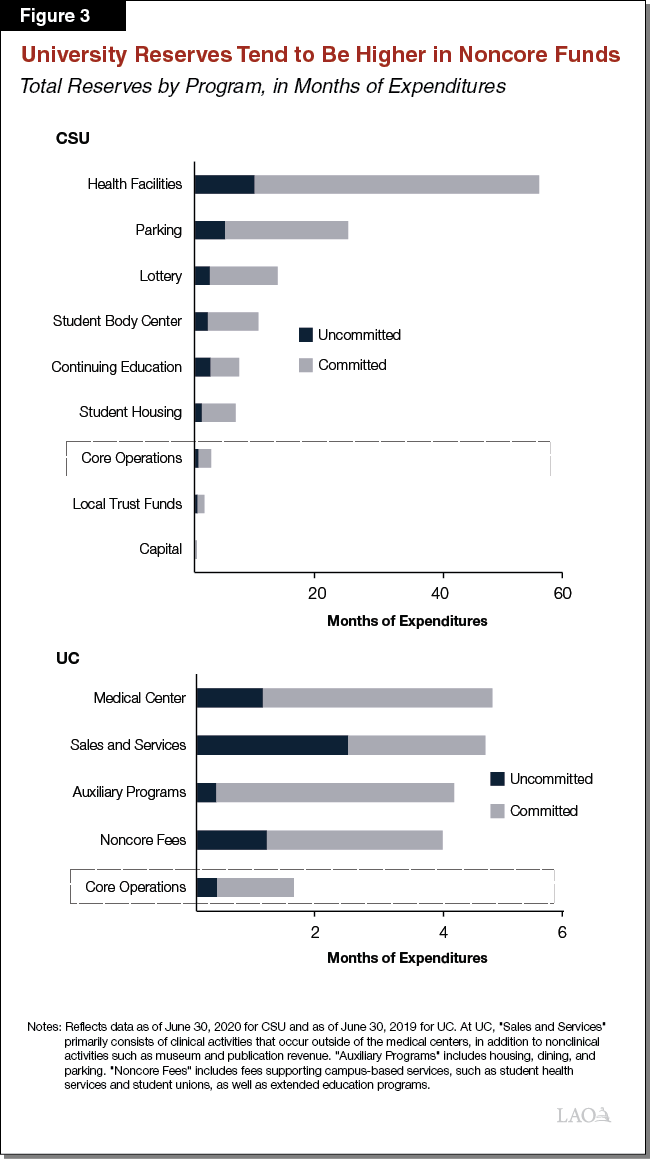 State Has Signaled Intent for CSU and UC to Begin Drawing Down Their Core Reserves. As part of the state’s plan to balance its budget in the midst of the recession, the 2020-21 budget package enacted ongoing General Fund reductions for the universities—$251 million (5.8 percent) for CSU and $259 million (7 percent) for UC. To mitigate the impact of these reductions, provisional budget language states legislative intent that campuses begin drawing down their core reserves. Campuses have begun adjusting their budgets accordingly. In conversations with our office this summer and early fall, campuses at both segments indicated that they intend to draw down a portion of their core reserves in 2020-21 and have plans to continue drawing them down over the next few years in anticipation of a multiyear budget problem.

Campuses Are Drawing Down Noncore Reserves Too. Whereas the universities’ noncore programs were not significantly impacted by previous recessions, those programs have been notably impacted by the pandemic. Remote operations are causing campuses to lose noncore revenue, as many noncore programs—including housing, dining, and parking programs as well as UC’s medical centers—are operating at reduced capacity. These revenue losses likely will continue at least through May 2021, as many campuses (including the entire CSU system) have announced plans to remain primarily in remote operations through the spring academic term. Although reserves in noncore programs prior to the pandemic tended to be relatively high, several campuses have indicated that they are drawing down their noncore reserves faster than their core reserves. As we note in our companion post An Analysis of University Cash Management Issues, the universities are exploring various solutions to assist their noncore programs, including internal and external borrowing.

Recession Is Impacting Campuses to Varying Degrees. The ability to offset core and noncore revenue reductions differs across campuses. Campuses with lower core and noncore reserve levels prior to the pandemic are positioned more precariously. Smaller, less selective campuses also tend to be in weaker fiscal positions, as these campuses tend to rely more on state funding. Larger campuses with relatively large noncore programs, however, also are facing fiscal challenges due to associated revenue losses. In addition, some campuses have dedicated a higher share of their budgets toward debt service on capital projects—commitments that must be paid even when overall budgets are shrinking.

University Reserve Policies Serve as a Starting Point. We believe both the universities and the state could benefit from having a clearer university reserve policy. Such a policy could be based upon a clear understanding of the roles of the universities vis-à-vis the state in helping campuses prepare for economic uncertainties. Regardless of who has responsibility for helping campuses prepare, we believe the Legislature could use the segments’ existing reserve policies as a starting point in considering desired reserve levels. CSU’s policy to hold between three to six months of uncommitted reserves likely offers sufficient reserves for it to respond to some economic downturns. At one to three months of core reserves, UC’s policies still offer some protection against economic downturns, but the smaller reserve level leaves campuses more vulnerable to unforeseen events. Before the Legislature adopts a specific university reserve policy, it likely would want to undertake further analysis and simulations, as the reserve levels required to respond to any future situation would depend upon many factors. These factors include the magnitude of the economic downturn, the likelihood the state reduces funding for the universities, the likelihood of tuition increases, potential enrollment changes, and the desired impact on core and noncore programs.

Better Data on UC Reserves Needed for Legislative Oversight. Accurate, readily available data on university reserves is necessary to gauge the fiscal health of CSU and UC. In the near term, reserve data can help the Legislature monitor CSU’s and UC’s responses to the current economic downturn. In the years to come, reserve data would allow the Legislature to assess CSU’s and UC’s preparedness for future economic downturns. While CSU provides readily available data through a publicly accessible portal, UC does not maintain publicly available reserves data. We recommend the Legislature direct UC to create a plan to develop a financial transparency data platform that includes key information about its reserves. We recommend the plan include any proposed changes to system policies, needed information technology improvements, associated costs, options to cover those costs, and a time line for implementation.