During recessions, agencies can experience challenges when their cash cushions shrink. While the state’s two public university systems—the California State University (CSU) and the University of California (UC)—have historically not experienced cash challenges, the coronavirus disease 2019 (COVID-19) pandemic and subsequent recession have created new cash issues for them. In this post, we analyze cash management issues at CSU and UC. We first compare cash flow of the state and the universities, then examine how the state and universities invest their cash, and next summarize how the universities helped the state with its cash management during the Great Recession. We conclude by identifying cash issues that have arisen during the COVID-19 pandemic and discussing related issues for legislative consideration.

State Routinely Manages Its Cash Position Through Short-Term Borrowing. As we noted in our publication Managing California's Cash, the state’s expenses are relatively even each month, but the state receives most of its revenues in the latter half of the fiscal year. As a result of this misalignment, the state routinely has to monitor and manage its cash position. When revenues received to date are too low to cover costs incurred to date (that is, its cash position is negative), the state typically engages in short-term borrowing—first internally from its available accounts, then externally from the municipal market. The state must repay most of this borrowing with interest, but some internal borrowing is interest-free. Though internal and external borrowing is routine in most fiscal years, the state has other cash management tools it can use in extraordinary situations. For example, during the Great Recession, the state paid workers late.

Universities’ Academic Programs Are Typically in a Better Cash Position Than the State. In contrast to the state, the universities receive their core revenues—primarily state General Fund and tuition revenue—in advance of their costs. Campuses receive tuition revenue at the start of each term and state General Fund on a monthly basis (Figure 1). Their operating expenses are spread about evenly throughout the year, with the exception of debt service payments, which are made twice a year—in the fall and spring. Because of the timing of these inflows and outflows, campuses typically maintain positive cash positions and do not need to borrow internally or externally to manage their cash flow throughout the year. 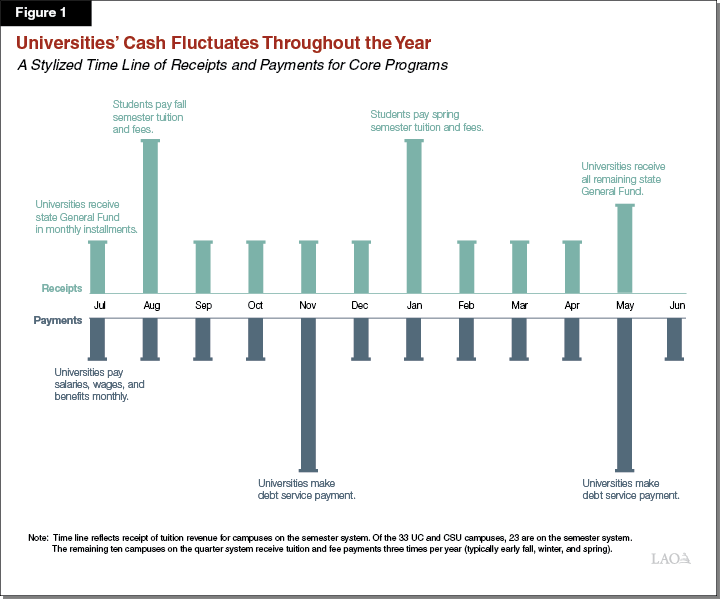 Universities Also Do Not Face Timing Issues With Noncore Programs. In addition to their core-funded academic activities, campuses operate numerous self-supporting enterprises, such as student housing, dining, bookstores, and (in the case of UC) medical centers. Cash flow statements for these programs are not publicly available. Staff at the CSU Chancellor’s Office and UC Office of the President, however, note that these programs also do not normally face cash timing issues, such that they maintain positive cash positions and do not routinely borrow for cash flow purposes.

State Pools Cash in Short-Term Investment Account. Rather than let cash sit idly, the state invests its cash surpluses. The state pools cash from the General Fund, special funds, funds from participating local entities, and other funds into a single investment account (the Pooled Money Investment Account, or PMIA). The returns in this investment account are available as investment income to most of the contributing fund sources. Under state law, money in this account is invested in relatively low-risk, short-term assets, such as U.S. Government securities and domestic corporate bonds. The goals of the account are to safeguard taxpayer money, ensure cash is readily available when program costs are incurred, and earn a modest rate of return. 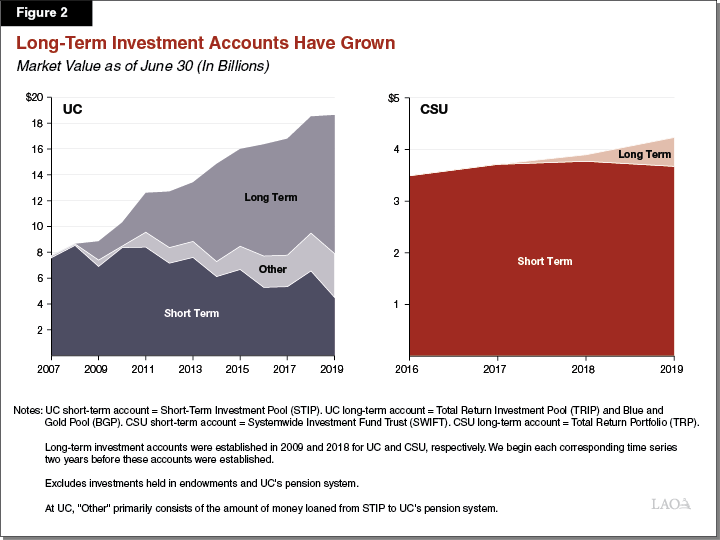 UC Has Been Borrowing to Make Pension Contributions. In addition to shifting funds into its long-term investment account, UC has borrowed funds internally from its short-term investment account and externally using bonds to help make its annual pension contributions. Specifically, since 2010, UC has borrowed $3.2 billion internally and $937 million externally for this purpose. (The Board of Regents has authorized the Office of the President to borrow an additional $1.8 billion through 2021‑22 for its pension costs using either internal or external sources.) Campuses and the Office of the President are repaying this pension borrowing with interest over time using their operating budgets. The investment returns resulting from this borrowing help UC pay down its unfunded pension liability. The borrowing, however, results in UC having less cash it can liquidate in the near term to address any immediate fiscal issues it might face.

Cash Management During the Great Recession

State Required CSU to Temporarily Keep Cash in State Account. In 2010‑11, the state required CSU to keep a portion of its cash in the state’s short-term account rather than CSU’s investment accounts. The action was intended to give the state an additional cash cushion before going to the municipal market for external borrowing. The amount that CSU was required to keep in the state’s account varied between $300 million and $870 million throughout 2010‑11. At the start of 2011‑12, the funds were to shifted to CSU’s short-term investment account. (The state did not take any similar actions involving UC.)

State Borrowed Cash From Universities. In 2011, the state developed a new account—the State Agency Investment Fund (SAIF)—and made arrangements with CSU and UC for them to make deposits into it. The universities deposited over $2 billion into the account (Figure 3). The state eventually repaid the segments with interest. The arrangement was designed to benefit both the state and universities—the state increased its cash cushion, whereas the universities received a higher return than if the funds were kept in their own short-term accounts. 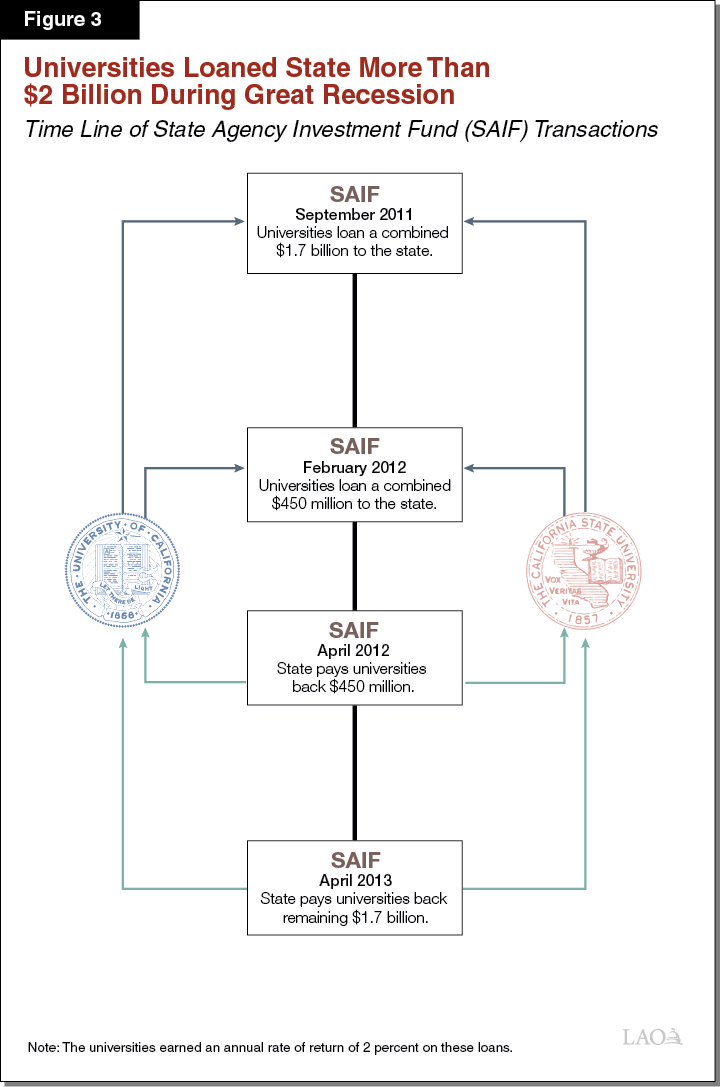 Cash Management During the Pandemic

State’s and Universities’ Cash Positions Are Somewhat Reversed. As we noted in our recent publication, An Update on California's Cash Management Situation, the state’s cash cushion is larger than it has been in previous recessions. This larger cushion is primarily due to the state’s higher General Fund and special fund reserves, which increase its capacity to borrow internally. Given the state’s larger cash cushion, it is less likely to need to take many of the extraordinary actions it took during the previous recession. By contrast, the universities have lost a significant amount of noncore revenue resulting from campus closures, which is, in turn, is reducing their cash cushions. The next three paragraphs describe new actions the universities are taking or considering to help them weather their emerging cash challenges.

Campuses Indicate They Might Begin Relying on Internal Borrowing. One tool available to campuses to address their negative cash positions is to internally borrow among their accounts. State law explicitly authorizes CSU to borrow funds from one of its accounts for another account, so long as the funds are (1) returned to the original account by the time needed for expenditure and (2) repaid with interest. UC also has the authority to borrow funds among its accounts. While campuses have not traditionally undertaken internal borrowing for operations, staff at the universities have signaled to the Legislature that they might use internal borrowing and transfers moving forward. Talk of such actions emerged earlier this year when the 2020‑21 May Revision contained a proposal that would have given campuses more flexibility to transfer funds between accounts without repaying the funds or incurring interest. (This proposal was not adopted in the final 2020‑21 budget package.)

UC Recently Issued Bonds to Support Its Operations. In July 2020, UC issued $1.5 billion in “working capital” bonds, which provide cash for UC’s operations. Based on discussions with the Office of the President and campuses, campuses likely will use the borrowed funds primarily to help sustain their noncore programs throughout 2020‑21. Campuses will repay the bonds from their operating budgets over ten years. For the first five years, UC will only make interest payments, thereby delaying the largest debt service costs to later years. According to the Office of the President, the Board of Regents approved the working capital bonds because of the low cost of borrowing. UC staff also emphasized that the borrowing was intended to be a one-time action, with the Board of Regents unlikely to authorize additional working capital bonds. CSU has not issued any working capital bonds to date.

Universities Have Greater Fiscal Flexibility Than the State. The California Constitution imposes several restrictions on the state in an effort to safeguard taxpayer money. For example, the state is forbidden from investing in the stock market (except in a few cases, most notably for pensions), thereby limiting the state to relatively safe, short-term investments. The state also must balance its budget each year and is prohibited from issuing bonds to cover operating deficits. By contrast, the universities have significantly greater flexibility than the state. Notably, both universities may invest funds in the stock market, and UC may issue working capital bonds. Although this greater flexibility allows the universities potentially to earn higher rates of return and gain better access to cash, it also exposes them (and indirectly the state, students, and other stakeholders) to greater risk.

University Strategies Come With Trade-Offs. The unprecedented challenges that the COVID-19 pandemic has created for the universities underlies their recent consideration of extraordinary cash management strategies. Each of the cash management strategies that the universities have recently implemented or are considering comes with trade-offs. Below, we summarize the trade-offs for three specific fiscal strategies that have been or are being considered.

Universities’ Fiscal Condition Will Be Important to Watch Over Coming Years. Given the significant effect of the COVID-19 pandemic on the universities’ budgets, together with the new strategies they are considering in response, we recommend the Legislature closely monitor the universities’ fiscal health over the next several years. Specifically, through oversight hearings or reporting requirements, we recommend the Legislature direct the universities to provide regular updates on their cash cushions, including how much cash they have in their short- and long-term accounts, the amounts of any internal loans or transfers that campuses have made to sustain their core or noncore programs, and any new external borrowing they undertake for cash or operating purposes.