A major cost driver in spending on the state’s correctional system is the number of inmates, parolees, and juvenile wards that the state is responsible for housing and supervising. In this analysis, we (1) provide an overview of the state correctional population; (2) discuss our projections of the inmate, parolee, and ward populations through 2024‑25; and (3) comment on how changes in the sizes of these populations could impact state correctional costs in both the near and long term.

The California Department of Corrections and Rehabilitation (CDCR) is responsible for the incarceration of adult felons, including the provision of training, education, and health care services. The 2020‑21 Budget Act includes a total of $13.4 billion from the General Fund to support the department’s operations. As of October 31, 2020, CDCR housed about 97,700 adult inmates in the state’s prison system. Most of these inmates are housed in the state’s 35 prisons and 42 conservation camps. (We note, however, that the 2020‑21 budget package reflects a plan to close two state prisons over the next few years.) The department also supervises and treats about 56,500 adult parolees when they are released from prison, generally after having served a term for a serious or violent crime. The remaining individuals released from prison are generally supervised in the community by county probation departments under what is known as Post‑Release Community Supervision (PRCS).

In addition, about 750 wards are housed in facilities operated by CDCR’s Division of Juvenile Justice (DJJ), which includes three facilities and one conservation camp. In approving the 2020‑21 budget package, however, the Legislature adopted a plan to gradually shift or “realign” the responsibility of DJJ for housing certain juvenile offenders from the state to the counties. Individuals released from state juvenile facilities are generally supervised by county probation departments.

In this section, we discuss our projections of the state correctional population through 2024‑25. As we discuss below, two major factors are projected to cause a decline in the number of inmates, parolees, and wards housed and supervised by the state. First, the emergence of the coronavirus disease 2019 (COVID‑19) represents a serious challenge for CDCR. This is because the department’s staff and the populations they oversee are often in close proximity to one another. In order to mitigate the spread of COVID‑19, the department has made various changes to its operations, such as releasing certain inmates early. Some of these changes have, on net, reduced the size of the overall state correctional population in the near term.

Second, various policy changes have been implemented that we estimate will further reduce the size of the overall state correctional population. For example, Chapter 590 of 2019 (SB 136, Wiener) eliminates a one‑year term added to individuals’ prison sentences (known as an enhancement) for prior offenses in certain cases.

Due to the continued pandemic, our projections assume that the inmate population will remain around 100,000 in the near term. However, this is subject to significant uncertainty. This is because it is unclear how long the pandemic will last, how soon effective treatments or vaccines will be widely available, and how the pandemic will affect crime and prison commitments going forward. In addition, it is uncertain how CDCR will continue to respond to the pandemic and how any actions different from what have already been taken could change the size of the inmate population. It is also possible that the state or federal courts—which are providing oversight of CDCR’s response to the pandemic—could require the department to take further or different actions.

Recent Policy Changes Could Continue to Keep Inmate Population Down After Pandemic. As noted above, the current inmate population is a couple tens of thousands of inmates lower than it was before the pandemic. We project that the population will remain around this level in the longer term, even after the pandemic is over. This is because several recent policy changes are expected to reduce the amount of time inmates spend in prison and, thus, create downward pressure on the inmate population on an ongoing basis. These policy changes include:

As shown in Figure 1, we project that various policy changes discussed above will keep the inmate population low even after the effects of the responses to COVID‑19 pass. Specifically, we estimate that the population will be around 100,000 through 2024‑25—a population level not seen since the early 1990s. 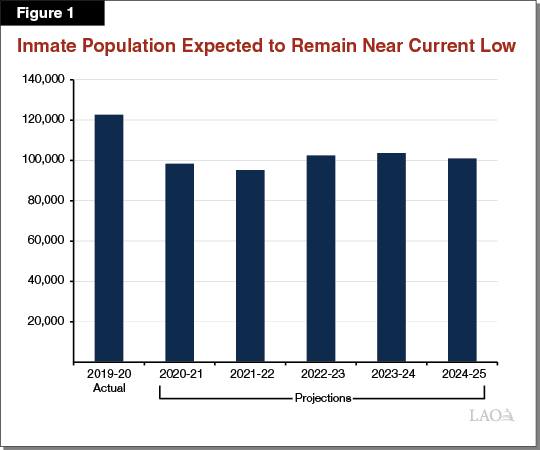 Substantial Decline Projected in Parolee Population. Between February 28 and October 31, 2020, the state parolee population increased by 4,100 (8 percent) from about 52,400 to 56,500 parolees. This increase is largely due to early releases from prison onto parole in response to COVID‑19. Going forward, we estimate that the parolee population will be impacted by two major factors that will result in a net decline in the population. First, we estimate there will be an increase in releases to parole due to more people being released from prison. This is a result of the early releases and sentencing changes discussed above. Because there will be additional people being released onto parole supervision, this will increase the average daily population of parolees.

Second, recent policy changes adopted by the Legislature will reduce the length of time people spend on parole—allowing them to be discharged earlier than they would otherwise. Because people will spend less time on parole, we estimate that this change will result in a substantial decline in the average daily parole population that will more than offset the above increase. The recent policy changes to parole include:

In view of the above, we project that the parolee population will decline from its current level of 56,500 parolees to roughly 33,000 parolees over the outlook period, as shown in Figure 2. 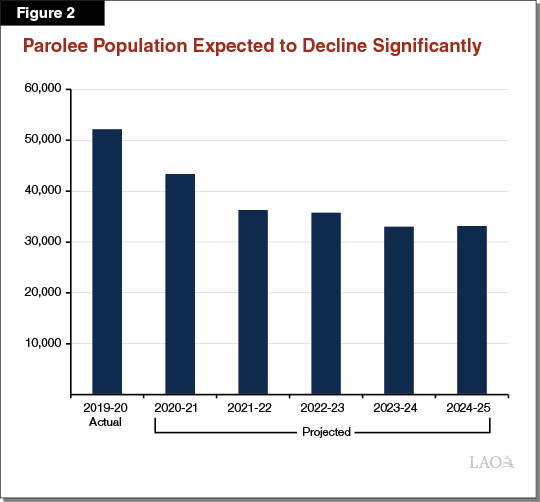 Juvenile Justice Realignment Projected to Significantly Reduce Ward Population. As previously noted, the 2020‑21 budget package included a plan to realign DJJ to the counties. Under the plan, DJJ will stop intake for most youth beginning on July 1, 2021. After that date, youth who would otherwise be sent to DJJ will generally be placed under county supervision. As part of this planned realignment, the state has committed to providing grants to counties to support their increased responsibilities.

As of October 31, 2020, there are about 760 wards housed in DJJ. In recent years, DJJ’s population has been gradually increasing as a result of policy changes that resulted in more youth being sent to DJJ rather than being sentenced as adults. However, we expect that there will be a large decline in the ward population once intake stops on July 1, 2021 due to the realignment. Specifically, as shown in Figure 3, after increasing somewhat in 2020‑21, we estimate that the population will decline by about 25 wards per month until reaching an average daily population of around a couple dozen wards in 2024‑25. 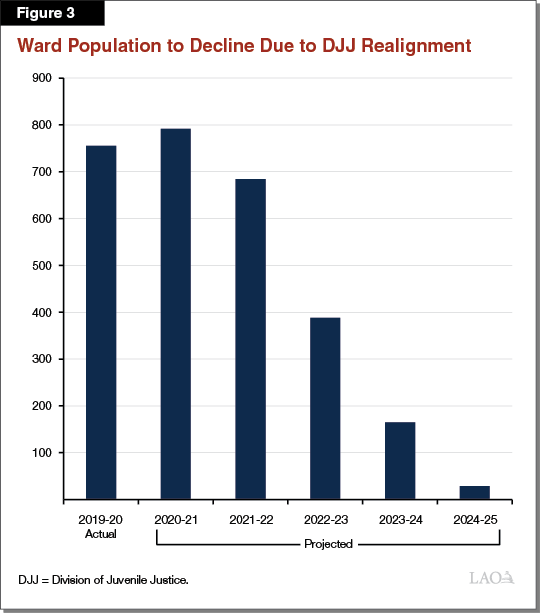 In this section, we discuss how our projected changes to the state correctional population will affect CDCR’s costs over the outlook period. Specifically, we estimate that the population changes will reduce costs in several hundreds of millions of dollars in the near term to around $1.5 billion by 2024‑25. As we discus below, this reduction in costs will essentially slow the expected growth in the department’s overall projected costs, which is being driven by various factors such as employee compensation.

Near‑Term Cost Reductions Driven by Fewer Inmates, Parolees, and Wards. In the near term, we estimate that the state will likely save several hundred million dollars annually as a result of the projected decline in inmates, wards, and parolees. This is because CDCR pays for some items—such as food or clothing—on a per person basis. Accordingly, the fewer inmates and wards it is responsible for, the smaller CDCR’s food and clothing expenditures will be. In addition, reductions in the size of the parole population will reduce CDCR’s workload associated with supervising parolees. This will result in lower costs as the department adjusts its workforce to reflect changes in this workload.

Long‑Term Cost Reductions Driven by Closure of State Correctional Facilities. In the longer term, we estimate that the projected declines in the inmate and ward populations will allow CDCR to close certain facilities over the outlook period. At this time, the administration plans to close the Deuel Vocational Institution in Tracy in 2021‑22 and a second, unnamed, prison in 2022‑23. In view of our inmate population projections, we find the state would be able to close three additional prisons by 2024‑25. In addition, the department could close all three of the DJJ facilities within the next few years due to the planned realignment (not including the conservation camp which is expected to continue operating), though there is some uncertainty about the timing of closures. Closure of the above facilities will allow CDCR to further reduce costs such as for staffing, utilities, and equipment currently associated with each facility. In total, we estimate that annual savings associated with closing five prisons and three DJJ facilities would be around $1 billion by 2024‑25.

Total Reduction in Costs From Population Decline Could Be Substantial. We estimate that savings associated with the reduction in the inmate, parolee, and ward populations, as well as the closure of five state prisons and three DJJ facilities, will total $1.5 billion annually by the end of the outlook period. We note, however, that there is some uncertainty about when the full savings associated with facility closures will be achieved. First, the need to maintain a low population density in the prisons due to the pandemic could delay the closure of prisons. Second, as a part of the closure process, the state will likely bargain with unions who represent the employees at the facilities slated for closure on how to minimize the effects on the workforce and day‑to‑day operations. For example, the state could develop an agreement with unions specifying the amount of money that employees who are required to relocate to fill CDCR vacancies elsewhere would receive. Accordingly, to the extent such limited‑term costs emerge from the collective bargaining process, they would temporarily offset cost reductions associated with facility closure by some amount. In addition, any delays in the bargaining process could delay facility closure, which would in turn, delay the associated cost reductions.