The Governor’s May Revision budget proposes $8.1 billion General Fund to provide a second, broader round of Golden State Stimulus payments to families with adjusted gross income (AGI) up to $75,000. In this post, we (1) provide an update on state and federal stimulus payments to date, (2) describe the Governor’s stimulus proposal, and (3) present two alternatives that would go further toward filling in the gaps in the unprecedented federal pandemic relief.

The May Revision identifies this proposal as a tax rebate due to revenues exceeding the state appropriations limit (SAL) across 2020‑21 and 2021‑22. As the Legislature will make numerous budgetary choices that could decrease or increase the extent to which the state has excess revenues, this analysis presents alternatives for providing cash assistance, but does not consider the extent to which the alternatives would be considered tax rebates under the requirements of Proposition 4 (1979).

Substantial Job Losses Among Low-Income Workers. The pandemic has led to devastating job losses, which have been concentrated among California’s low-wage workers. As of March 2021, more than 80 percent of unemployed workers live in households with below-average annual income.

Unprecedented Federal Relief Has Mitigated Pandemic’s Impacts. As illustrated in the Figure 1 below, federal relief programs have provided over $150 billion of temporary assistance to Californians during the pandemic, including: 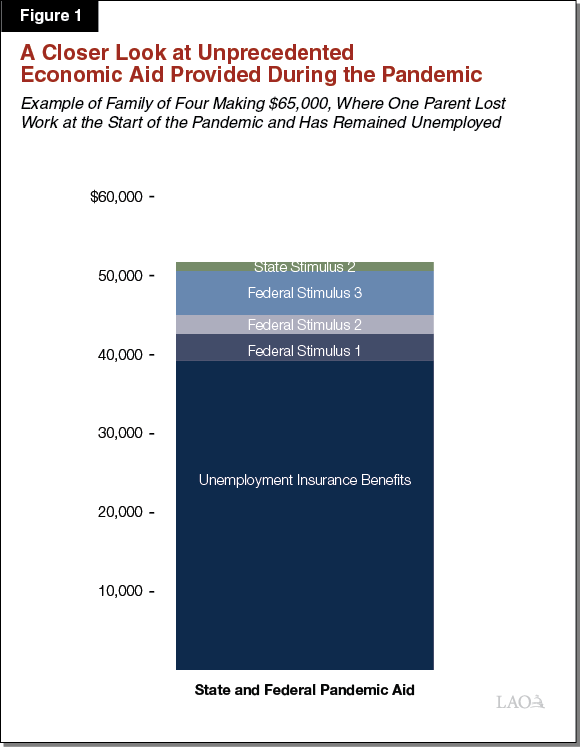 Undocumented Individuals Not Eligible for Federal Relief. While federal relief programs have helped most Californians, undocumented individuals have largely been left out of these federal programs. In recognition of this, the state included payments for undocumented workers in the Golden State Stimulus program discussed below.

State Issued First Round of Stimulus Checks Earlier This Year. As part of the early action budget agreement, Chapter 8 of 2021 (SB 88, Committee on Budget and Fiscal Review), the state enacted its own stimulus payment program. The Golden State Stimulus program provided $600 payments to low-income households, including recipients of several safety net programs—California Work Opportunity and Responsibility to Kids (CalWORKs), the Supplemental Security Income/State Supplemental Payment program, and the Cash Assistance for Immigrants Program. (The federal American Rescue Plan [ARP] Act subsequently provided additional one-time grants to CalWORKs families.) The state’s first stimulus program also provided an extra $600 payment to low-income undocumented workers who pay taxes using an individual taxpayer identification number (ITIN). ITINs are used by about half of the state’s undocumented workers to pay taxes. The administration estimates that 5.7 million payments, totaling $3.7 billion, will be made under the program.

The Governor’s May Revision budget proposes $8.1 billion in General Fund to provide a second, broader round of Golden State Stimulus payments to families with AGI up to $75,000. (As noted above, the administration also proposes that these payments count as tax rebates due to revenues exceeding the SAL.) As shown in Figure 2 below, the second round of payments proposed by the Governor includes three different one-time payments: (1) $600 to taxpayers who did not receive the first round $600 payment, (2) an additional $500 payment to families who claim a dependent (typically a child), and (3) a separate $500 payment to ITIN filers who claim a dependent.

Second Round of Stimulus Payments Broader, More Costly Than First Round. The proposed second round of stimulus payments would total $8.1 billion, more than twice as large as the first round of payments. The estimated cost is larger because Californians with higher earnings would be eligible to receive checks under the second round. This has the effect of greatly increasing the number of payments that the state would distribute.

Using One-Time Money for Pandemic Relief Makes Sense. The state is set to receive a significant state revenue windfall this year, in addition to $27 billion in federal aid provided to the state under the ARP. While the Governor proposes these payments as a rebate under Proposition 4, the Legislature could make alternative choices in crafting its budget. Prioritizing a portion of the significant surplus for one-time pandemic relief efforts makes sense.

Payments Not a Major Source of Economic Stimulus. While these payments can be critical for low-income individuals and families, they are unlikely to have a major impact on the state’s economic recovery. This is because the $8.1 billion in proposed relief payments represent less than one-fifth of 1 percent of the state economy.

Instead of Economic Stimulus, Focus on Filling Gaps in Federal Relief. Federal relief efforts during the pandemic have been unprecedented in scale. The state’s capacity to provide relief is much more limited. The state, therefore, should ensure that its pandemic relief (1) targets those most in need and (2) focuses primarily on those not served by federal programs.

Vast Majority of Stimulus Funds Would Go to Households Who Already Received Federal Checks. Most households proposed to receive payments under the Governor’s expanded Golden State Stimulus have already benefited from unprecedented federal pandemic aid. As an example, as shown in Figure 3, an eligible family of four who would receive a stimulus payment under the expanded proposal would, in total, receive more than $12,000 in federal and state stimulus payments. An otherwise similar family, but with undocumented workers, would receive much less overall—about $2,000—due to being ineligible for federal stimulus payments. Given the significant overlap with prior federal efforts, the Governor’s expanded Golden State Stimulus proposal would not significantly fill in gaps in federal relief. Based on cost estimates provided by the administration, we estimate that less than 10 percent of the proposed stimulus funds would benefit taxpayers and families who have been ineligible for federal aid programs during the pandemic. 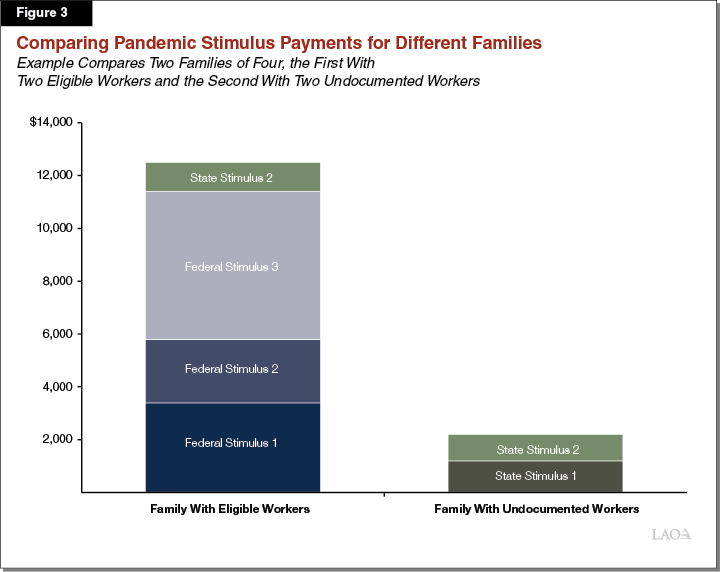 A More Targeted Approach to Fill in Gaps

Reworking Governor’s Proposal to Fill in Gaps in Federal Relief. Undocumented low-wage workers have faced significant job losses and have not benefitted from federal income support. The Legislature has options—to expand or redirect—the Governor’s broad proposal in order to more equitably target state assistance to undocumented, low-wage workers. Below, we provide two examples of these options and display them visually in Figure 4: 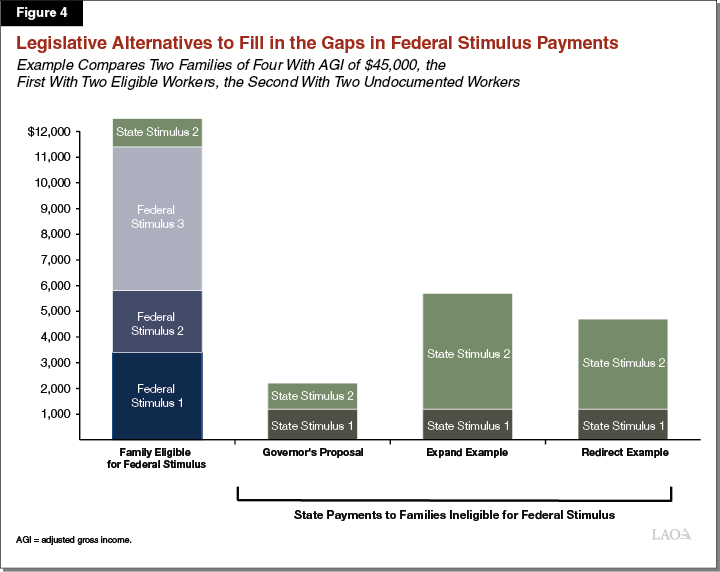