The 2021‑22 budget provides $17.3 billion from the General Fund for judicial and criminal justice programs, as shown in Figure 1. This is an increase of $2.3 billion (15 percent) above the revised 2020‑21 spending level.

The budget provides $5 billion for the judicial branch in 2021‑22—an increase of $1.1 billion (26 percent) from the revised 2020‑21 level. This amount includes $2.9 billion from the General Fund and $499 million from the counties, with most of the remaining balance from fine, penalty, and court fee revenues. The General Fund amount is a net increase of $786 million (37 percent) from the revised 2020‑21 amount. As we discuss below, this increase is largely due to additional funding provided for the trial courts—including $280.4 million for baseline trial court operations, $140 million for programs and activities aimed at reducing pretrial detention of individuals in jail, and $90 million to address backlogs related to the coronavirus disease 2019 (COVID-19) pandemic. Funding for trial court operations is the single largest component of the judicial branch budget, accounting for nearly three-fourths of total spending. In addition to the amounts above, the budget also includes $445.5 million in new or reauthorized lease revenue bond authority.

Baseline Support for Judicial Branch Operations. The budget includes a $303.5 million General Fund increase in baseline support of judicial branch operations. This amount includes $200 million to restore 2020‑21 budget reductions made to the trial courts ($176.9 million) and the state level judicial branch entities ($23.1 million). It also includes $72.2 million for increased trial court operational costs and $31.3 million for increased trial court health and retirement benefits. (We note the budget package also sets aside an additional $32.2 million to fund any additional cost increases that occur during 2021‑22).

Trial Court Backlog. The budget provides $90 million one-time General Fund to address backlogs that have grown in the trial courts due to the COVID-19 pandemic. This amount includes (1) $60 million for backlogs across all case types and (2) $30 million specifically for readiness conferences to adjudicate certain criminal cases prior to trial in order to address criminal case backlogs.

Backfill of Fine and Fee Revenue. The budget includes $118.3 million General Fund to backfill a decline in fine and fee revenue collected to support trial court operations. This is a $128 million reduction from the revised 2020‑21 level.

Excess Property Tax Offset. The budget includes a $121.1 million reduction in General Fund support for trial court operations in 2021‑22 in order to reflect the availability of property tax revenue in accordance with Control Section 15.45 and Section 2578 of the Education Code. Such funds are remitted to the state by counties that collect more property tax than state law allows them to spend on education.

Facilities. The budget provides a total of $260.4 million General Fund ($206.9 million one time) for maintenance and modification of facilities in 2021‑22. This amount includes $188 million one time for deferred maintenance in trial court and appellate court facilities. It also includes $18.9 million one time in 2021‑22 (as well as $48.8 million in 2022‑23) for modifications to two existing courthouses in Orange and San Diego Counties to address fire and life safety issues. Finally, the budget includes $53.5 million for increased trial court and appellate court facility maintenance, utility, and lease costs.

California Department of Corrections and Rehabilitation

The budget provides $13.8 billion (mostly from the General Fund) for the California Department of Corrections and Rehabilitation (CDCR). This is a net increase of $1.4 billion (11 percent) above the revised 2020‑21 level. This increase primarily reflects additional costs related to (1) reversal of employee compensation reductions made in 2020‑21 when the state faced significant budgetary uncertainty due to the COVID-19 pandemic; (2) one-time funding for deferred maintenance and capital outlay projects at various prisons; and (3) a projected increase in the average daily inmate population primarily as a result of the resumption of intake from county jails, which was stopped for much of 2020‑21 to mitigate the spread of COVID-19 to prisons. This additional spending is partially offset by various spending reductions, including the planned closure of the Deuel Vocational Institution (DVI) in Tracy by September 30, 2021 and a projected decline in the average daily parolee population primarily due to recent policy changes that will result in people on parole being discharged earlier than they would otherwise. (The net increase in spending does not reflect growth in employee compensation costs in 2021‑22 because such costs are accounted for elsewhere in the budget.) In addition to the amounts above, the budget also includes $102.5 million in new or reauthorized lease revenue bond authority. 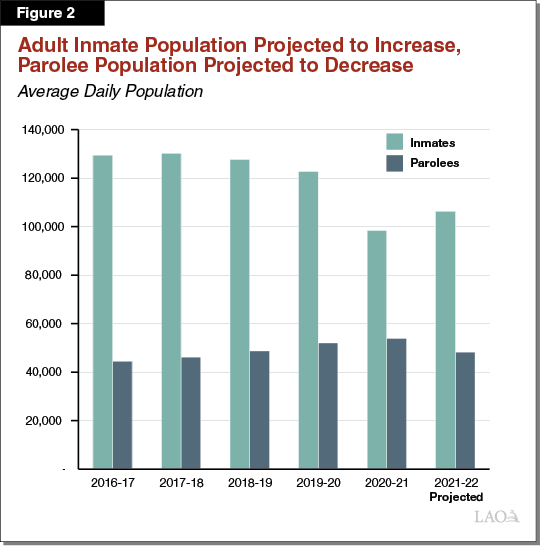 COVID-19-Related Funding. The budget provides $408 million one-time General Fund in 2021‑22 for costs of responding to COVID-19, including testing, treatment, surge capacity, custody overtime, and cleaning, as well as reimbursements for county jails housing people sentenced to state prison due to restrictions on prison admissions intended to reduce the spread of the virus. In addition, the budget includes $51 million General Fund (increasing annually to $78 million by 2024‑25) for COVID-19 workers’ compensation claims related to Chapter 85 of 2020 (SB 1159, Hill).

Inmate Health Care. The budget includes $61 million in General Fund augmentations for inmate health care. This includes (1) $43 million (decreasing to $36 million annually in 2022‑23) to increase and standardize staffing levels within the Psychiatric Inpatient Program, (2) $4 million (increasing to $12 million annually by 2023‑24) to improve quality management and patient safety, and (3) $4 million for telepsychiatry supervision staffing.

Closure of the Division of Juvenile Justice (DJJ). The budget package requires DJJ to be permanently closed by June 30, 2023. The closure is a result of a plan adopted as part of the 2020‑21 budget package to shift or “realign” the responsibility of DJJ for housing certain juvenile offenders from the state to the counties. The budget also includes resources to establish the previously approved Office of Youth and Community Restoration (OYCR) within the Health and Human Services Agency. OYCR will be responsible for providing various forms of technical assistance and oversight to county juvenile justice systems. (For more information about the establishment of OYCR, please see our Health spending plan post.)

Other Budget Adjustments. The budget also includes various other General Fund adjustments. Some of the major adjustments include the following:

The budget also includes an additional $175.7 million General Fund to support various capital outlay projects in state prisons. This includes (1) $115.7 million to pay for increased construction costs for Health Care Facility Improvement Program projects and shift existing lease revenue bond authority for the projects to the General Fund, (2) $30.1 million in reauthorized funding for the construction of medication room improvement projects at various prisons, and (3) $13.9 million to construct air cooling systems in housing units at California Institution for Men (CIM) in Chino. In addition, the budget includes a $91 million reauthorization of lease revenue authority to construct a mental health crisis facility at CIM and a $11.5 million augmentation in lease revenue authority for an ongoing project to construct heating, ventilation, and air conditioning systems at Ironwood State Prison in Blythe.

The budget provides $1.1 billion for operational support of DOJ in 2021‑22—an increase of $95 million (9 percent) from the revised 2020‑21 level. This amount includes $387 million from the General Fund—a net increase of $34 million (10 percent). (The net increase does not reflect changes in employee compensation costs in 2021‑22 because such costs are accounted for elsewhere in the budget.)

Legal Resources. The budget provides $16 million in various funds for increased legal resources. This includes $13.9 million—$3.5 million from the False Claims Act Fund and $10.5 million in federal funds—in additional resources for the Medi-Cal Fraud and Elder Abuse Division. It also includes $2.1 million from the Public Rights Law Enforcement Fund to support the workload of the Health Rights and Access Unit.

Bureau of Forensic Services (BFS). Due to declines in criminal fine and fee revenue used to support BFS, the budget provides a one-time $6 million General Fund backfill to maintain service levels. The budget also redirects $10 million General Fund previously budgeted for other DOJ programs to support BFS. The $10 million in redirected funds would be backfilled by funds from the Fingerprint Fees Account. In total, this results in a $16 million one-time General Fund augmentation for BFS. Additionally, the Legislature directed DOJ through supplemental reporting language to submit a report by March 2022 identifying various options—other than the state General Fund—to support BFS operations.

Police Use of Force Investigations. The budget provides $15.3 million General Fund (increasing to $15.6 million annually beginning in 2022‑23) for the implementation of Chapter 326 of 2020 (AB 1506, McCarty). Specifically, to support four investigative teams—as well as legal, victim, and other services—for DOJ investigations (and potential prosecutions) of police officers who are involved in shootings that result in the death of an unarmed civilian.

Bureau of Gambling Control (BGC). The budget includes $3.4 million annually in 2021‑22 and 2022‑23 from the Gambling Control Fund for cardroom-related licensing workload. The budget package also prohibits BGC from collecting certain cardroom-related fees on a one-time basis between January 2020 and August 2022 (the exact period differs by fee) and generally requires the refund of payments that were made during the covered period. This fee waiver will reduce revenues in the Gambling Control Fund by an estimated $15 million.

Other Budget Adjustments. The budget includes various other General Fund and special fund adjustments. Some of the major adjustments include the following:

The budget provides $617 million for the Board of State and Community Corrections (BSCC) in 2021‑22—an increase of $172 million (39 percent) from the revised 2020‑21 level. This amount includes $350 million from the General Fund—a net increase of $123 million (54 percent). This increase is primarily due to limited-term funding being provided for various grant programs.

We note that the budget package also directs BSCC to allocate $26.7 million appropriated through Control Section 19.56 to various local governments for public safety activities, such as enforcement against unpermitted cannabis cultivation and purchase of public safety radios and body-worn cameras. The budget provides BSCC with $100,000 one-time General Fund to administer these funds. (For more information about Control Section 19.56, please see our “Other Provisions” spending plan post.)

Reduction in Jail Construction Funding. The budget package includes statutory changes to decrease the lease revenue authority awarded by the state to counties for jail construction projects by $229 million. This adjustment results from counties choosing to relinquish awards as well as some of the authority being unawarded. We note that $202 million of this amount is reflected in BSCC’s budget and $27 million is reflected in CDCR’s budget, though BSCC has primarily been responsible for administering jail construction grant programs.

Repeal of Criminal Justice-Related Fees. The budget provides a total of $90 million General Fund in 2021‑22 to provide counties with a backfill related to revenues lost due to the elimination of various criminal justice-related fees. This amount consists of the following: