Summary. The Governor proposes a roughly $1 billion discretionary cap‑and‑trade expenditure plan. In our view, the Governor’s plan is based on conservative revenue assumptions. We think several hundred million dollars more could be available for discretionary expenditures in the budget. We will provide additional information later this spring after the results from next couple of quarterly cap‑and‑trade auctions are available. Of the proposed spending, the vast majority would go to existing programs, including incentives for zero‑emission vehicles (ZEVs) and programs to reduce local air pollution. The most significant new proposal—$30 million for mobile air quality monitoring—raises a variety of questions that the Legislature might want to explore in budget hearings this spring.

Cap‑and‑Trade Auction Revenue. Revenues from quarterly cap‑and‑trade auctions are deposited in the Greenhouse Gas Reduction Fund (GGRF) and the funds are generally allocated to climate‑related programs. Under current law, about 65 percent of auction revenue is continuously appropriated to certain projects and programs, including high‑speed rail, affordable housing, transit, and safe drinking water. In addition, beginning in 2022‑23, $200 million is continuously appropriated for forest health and wildfire prevention. This $200 million is taken “off the top” before calculating the other continuous appropriation percentages. The remaining revenue is available for appropriation by the Legislature through the annual budget for other ongoing funding commitments (such as state administrative costs and statutory transfers), as well as discretionary spending programs. (These funds do not count toward the state appropriations limit which, as we discuss in our report The 2022‑23 Budget: Overview of the Governor’s Budget, likely will be a key consideration in the Legislature’s budget deliberations.)

Governor Proposes Almost $1 Billion Discretionary Spending. The Governor’s budget assumes cap‑and‑trade auction revenue of $3.6 billion in 2021‑22. Based on this revenue estimate, there would be roughly $600 million in carryover funding available to be allocated in 2022‑23, plus an estimated $2.3 billion in revenue collected in 2022‑23. As shown in Figure 1, about $1.5 billion would go to continuously appropriated programs in 2022‑23, $239 million would go to other existing spending commitments, and $979 million would go to proposed discretionary spending. Also, based on these revenue assumptions, there would be a roughly $200 million fund balance at the end of 2022‑23 (also known as a reserve).

Proposal Mostly Provides Funding for Existing Programs. Almost all of the proposed discretionary spending would support existing programs that have received GGRF allocations in past years. Specifically, $676 million would support ZEV programs at the California Air Resources Board (CARB) and $240 million would go to continued implementation of Chapter 136 of 2017 (AB 617, C. Garcia). (The proposed ZEV‑related spending is part of the Governor’s broader package of ZEV‑related proposals.) The proposed expenditure plan also provides $33 million in discretionary funding for safe and affordable drinking water. This funding—in addition to the estimated $97 million provided through continuous appropriations—would bring total funding for safe and affordable drinking water to $130 million in 2022‑23, consistent with past budgets.

The only new major spending proposed in the discretionary spending package is $30 million one time for expanded community‑level air monitoring. Mobile monitors would be used to provide a one‑time snapshot of air pollution at the local level. According to the administration, the data would be integrated into CARB tools that help visualize local pollution, and potentially inform future AB 617 activities to reduce community pollution in disadvantaged communities. The budget also includes several proposals to continue or increase staff and resources to administer GGRF programs. Some of these proposals are related to implementing recently enacted legislation. Funding would support staff at CARB, the Office of Planning and Research, the Coastal Commission, and the Office of Environmental Health Hazard and Assessment. We are reviewing these smaller proposals as part of our analyses of the budgets of the associated departments, but they are not a primary focus in this analysis.

In this section, we assess the Governor’s revenue assumptions and the amount of GGRF available for discretionary spending.

Governor’s Revenue Assumptions Are Conservative. In our December 2021 post, Cap‑and‑Trade Auction Update and GGRF Projections, we estimated GGRF revenue under three different allowance price scenarios. As shown in Figure 2, the administration’s revenue assumptions in both 2021‑22 and 2022‑23 are slightly below our low revenue scenario, where we assume all allowances sell at the floor price. Although the administration also assumes that all allowances will sell at the floor price, its estimates of the number of allowances offered and the level of the floor price are slightly lower than ours. 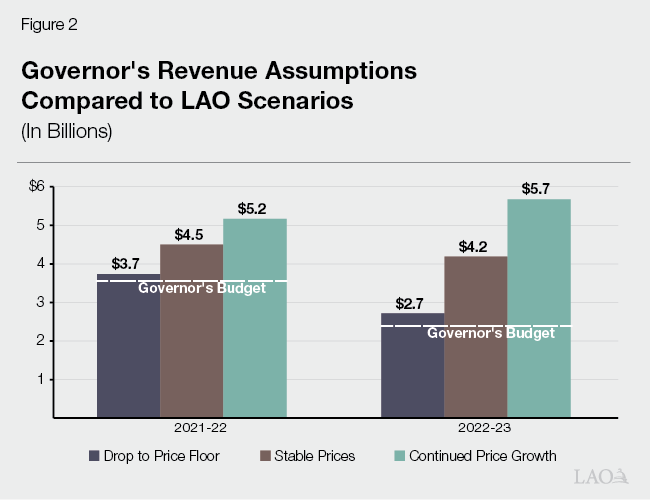 There is substantial uncertainty in auction revenue, so it is possible that revenue could drop below our low revenue scenario. However, even under relatively conservative assumptions, we think total auction revenue will be at least $600 million higher than the Governor’s budget assumes over the two‑year period. Under our base revenue scenario (stable allowance prices), which we consider the most likely of our three scenarios, total revenue over the two‑year period would be $2.8 billion higher than assumed under the Governor’s budget. We will provide the Legislature with updated revenue forecasts in the coming months as more information becomes available, including the results of future quarterly auctions. 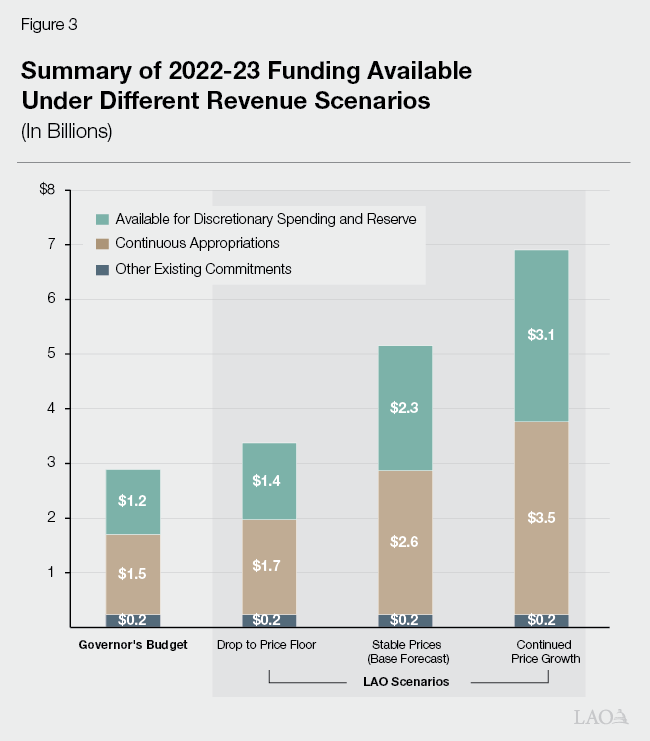 Ultimately, the amount of discretionary funding allocated in the 2022‑23 budget will depend on both (1) revenue assumptions and (2) how much the Legislature chooses to leave as a reserve in the GGRF to address revenue uncertainty. These two factors are related and the Legislature could take different budgeting approaches. If the Legislature assumes higher revenues, it might also want to maintain a substantial reserve in the GGRF in case revenue is lower than expected. For example, in previous reports, we suggested a reserve of about 10 percent of estimated annual revenue is a reasonable starting point. Under our base revenue forecast, a 10 percent reserve would be slightly more than $400 million—which would leave about $1.9 billion available for discretionary programs. If the Legislature assumes lower revenues, there is less of a need to maintain a substantial reserve because there is little risk that revenues would be lower than expected. Under our lower revenue scenario where allowance prices drop to the floor, the Legislature would collect enough revenue to allocate $1.4 billion to discretionary programs, but leave very little money in the reserve. Under both budgeting approaches, the Legislature would have several hundred million dollars in additional funding available for discretionary spending.

In this section, we identify several key questions for the Legislature to consider as it evaluates the Governor’s proposal and develops its cap‑and‑trade spending plan.

Depending on its spending priorities, the Legislature could consider a variety of modifications to the continuous appropriations. For example, if the Legislature considers certain discretionary programs higher priority, it could give those discretionary programs first call on future auction revenue. This could be similar to the Legislature’s action to allocate $200 million off the top to forest health and wildfire prevention as part of the 2021‑22 budget agreement. The Legislature could also consider allocating a specific annual amount to each continuously appropriated program, rather than a set percentage of auction revenue. This approach would provide a more consistent funding amount for these programs. Plus, if annual revenue continues to grow, this structure would allow the Legislature to use the annual budget process to determine how to allocate the additional funding in a way that best reflects its changing priorities.

How Should the Legislature Allocate Discretionary Funding? The Governor’s proposal largely allocates funding to existing programs. As always, the Legislature will have to weigh many different spending priorities when considering how to allocate discretionary funding, including how to balance greenhouse gas (GHG) reductions, local air quality improvements and monitoring, and other spending priorities. One factor it might want to consider is what other funding sources are available and already allocated to climate‑related programs. For example, the Governor’s proposed budget includes $6.1 billion in total a five‑year ZEV package, which includes $676 million from the GGRF. This is in addition to a $3.9 billion three‑year package for ZEVs included in the 2021‑22 budget agreement. (For more detail on the multiyear funding packages included in last year’s budget agreement, see our post The 2021‑22 Spending Plan: Natural Resources and Environmental Protection.) The Legislature will want to consider the degree to which cap‑and‑trade funding should be used in 2022‑23 to supplement these other ZEV efforts versus targeting other programs that would not receive any new funding as part of the Governor’s proposal, such as waste diversion programs and other climate‑related programs.

Also, as we have emphasized in previous reports, the Legislature is not limited to focusing its cap‑and‑trade expenditure plan on spending options. We recommend the Legislature consider using a portion of GGRF revenue to provide direct financial support to households and/or businesses. For example, the Legislature could use GGRF to provide lump sum rebates to households, reduce other state taxes (such as sales tax rates), or use the funds to reduce retail electricity rates. Importantly, each of these “revenue recycling” options could be structured in a way that maintains cap‑and‑trade’s incentive for households and businesses to reduce GHGs, while also partially or fully offsetting the financial impact of cap‑and‑trade prices on businesses and consumers—particularly low‑ and moderate‑income households. In our view, these revenue recycling options become even more attractive if allowance prices—and associated impacts on energy prices—continue to increase.

Although there are likely some benefits to additional air quality monitoring, based on our initial review, it is unclear why the Governor’s proposal is the most effective monitoring approach. Some questions for the Legislature to consider about the proposal include:

As the Legislature considers this proposal, and weighs it against other spending priorities, it might want to direct the administration to report at budget hearings on the questions above. This would help the Legislature evaluate the overall merits of the proposal. Without additional detail about why this new monitoring effort is the most effective approach to monitoring, the Legislature might consider redirecting this funding to other existing programs that are high legislative priorities.