Summary. The 2022‑23 Governor’s Budget proposes $1 billion General Fund in 2022‑23 and $2 billion in 2023‑24 to make state payments on the federal Unemployment Insurance (UI) loans the state received during the pandemic. The proposed state payment would reduce the outstanding loan balance by about 15 percent. In this post, we update earlier projections for the UI loan repayment and assess the Governor’s proposed payments. We estimate that the $3 billion payment would reduce General Fund interest costs over the repayment period by a total of $550 million to $1.1 billion. The payment also could reduce employer payroll tax costs in roughly ten years. Should the Legislature instead wish to provide immediate tax relief, one option to consider would be to provide employers state UI tax credits to offset their upcoming costs to repay the federal loan.

See our May 2021 report for a detailed overview of the state’s UI system.

UI Program Assists Unemployed Workers. Overseen by the Employment Development Department (EDD), the UI program provides weekly payments to workers who lost their jobs through no fault of their own. The average payment—excluding federal augmentations during the pandemic—is about $330 per week. Employers pay a payroll tax into the state’s UI trust fund to cover payment costs. Employer UI payroll taxes average 3.6 percent and are applied to the first $7,000 of each employee’s wages. The state’s tax base—$7,000—is the minimum allowable amount under federal law.

States Borrow From Federal Government During Economic Downturns. Under existing state tax and benefit rules, the UI trust fund does not build large enough reserves in normal times to cover the increase in claims during a recession. During recessions, states may borrow from the federal government to continue payment benefits if state UI funds are insufficient. These loans must be repaid, with interest (currently 1.6 percent annually), at a later time. The loan principal is repaid by automatic increases in the federal UI tax rate employers pay. The loan interest typically has been paid from states’ General Funds.

Since Pandemic Began, State Has Received $20 Billion in Federal UI Loans. Prior to the pandemic, at the start of 2020, the state’s UI trust fund held $3.3 billion in reserves. Despite these reserves, the state’s UI trust fund became insolvent during the summer of 2020, a few months following the start of the pandemic and associated job losses. California, like many other states, used federal loans to continue paying benefits during the pandemic. In total, the state needed to borrow about $20 billion from the federal government, roughly twice the amount the state borrowed for UI benefits during the Great Recession.

Recent Fraud Concentrated in Federal UI Benefits That Do Not Affect Loan Repayment. Figure 2 shows the administration’s estimate of possible UI benefit fraud that occurred during the pandemic. Almost all pandemic‑era fraud occurred in the temporary federal programs that now have ended. The federal government, not the state UI trust fund, paid these benefits. As a result, the state did not use federal UI loans to pay these fraudulent benefits, meaning California employers are not required to repay any of the fraudulent federal benefits. 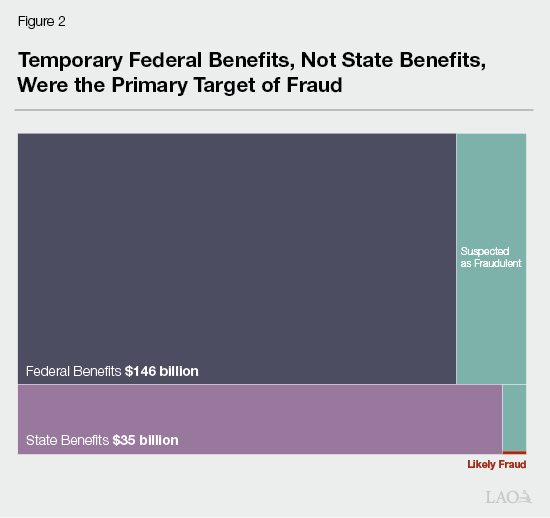 State UI Fraud Does Not Appear to Be Major Factor in Size of UI Loans to Be Repaid. Although the figure shows the administration’s estimate of possible state fraud during the pandemic, a more reliable estimate of likely fraud in state UI benefits comes from an audit of claims in 2020. This review suggests about $100 million of $35 billion in state benefits paid during the pandemic were fraudulent. This estimate of likely fraud is much smaller than the $1.3 billion a separate EDD analysis flagged as possible fraud, but this $1.3 billion estimate likely is overstated. To arrive at the estimate of $1.3 billion, EDD counts state UI claims as fraudulent if a worker did not respond to a request for additional identity documents after they had started receiving benefits. There are several reasons why workers with legitimate claims may not have followed up with EDD. Many of the suspected claimants had already run out of benefits and thus had little reason to log in to confirm their identity. Other claimants may have given up in frustration after trying unsuccessfully to send requested documentation to EDD. Since state UI fraud was less widespread than fraud in the temporary federal programs, state UI fraud does not appear to have notably increased the amount of federal UI loans that the state and employers are to repay.

Updated Forecasts Under Two Economic Scenarios—Low Cost and High Cost. To illustrate state and employer costs to repay the federal UI loans, this analysis updates our earlier low‑ and high‑costs forecast scenarios for the state’s UI system based on different underlying economic scenarios. Under the low‑cost scenario, employment quickly returns to pre‑pandemic levels and interest rates remain historically low for the entire period. Under the high‑cost scenario, the state’s full economic recovery is delayed several years, and interest rates paid on the UI loans increase gradually over the next several years.

Loan Will Take Many Years to Repay Under Either Scenario. Under our low‑cost scenario, the state and employers pay off the federal loan in 2030. Under our high‑cost scenario, the payoff occurs in 2032. Neither of these scenarios capture the possibility of another recession sometime this decade. Should that occur, payoff of the federal loan would extend well beyond 2032.

Looking Ahead at State Costs
to Repay the Federal UI Loan

The 2022‑23 Governor’s Budget proposes to make a $1 billion General Fund payment in 2022‑23 and an additional $2 billion General Fund payment in 2023‑24 toward repaying the outstanding balance on the state’s federal UI loans. The proposed supplemental payment would reduce the state’s outstanding loan balance by about 15 percent.

$3 Billion Repayment Would Lower State Interest Costs and Employer Costs... The Governor’s proposal would reduce the amount of outstanding federal UI loans. As a result, the proposal would reduce state interest costs immediately. The state also would face lower interest payments each year the loan remains outstanding. We estimate that the Governor’s proposed $3 billion payment likely would reduce General Fund interest costs over the repayment period by a total of $550 million to $1.1 billion.

…But Provide No Near‑Term Economic Relief to Employers or Workers. The proposed state payment also would reduce employer costs in the future. In general, the $3 billion deposit would reduce the amount employers must repay by $3 billion. However, employers would not benefit from these lower costs for many years. This is because the federal tax increases remain in place until the loan is fully repaid, which would still take several years even with the $3 billion payment. Further, although the state payment could shorten the number of years that employers pay the increased federal tax rates, employers may see no direct benefit if the payment is too small to reduce the repayment schedule by a full year. (In this case, employers would nevertheless pay the higher federal UI tax rates, but the carryover revenue would instead be deposited into the state UI trust fund. These funds would be available to pay UI benefits in future years.)

To Provide Immediate Benefit, Legislature Could Instead Provide UI Tax Credits to Businesses. Should the Legislature instead wish to provide immediate tax relief to employers while the economic effects of the pandemic linger, one option to consider would be to provide employers state UI tax credits to offset the upcoming federal UI tax increase. Tax credits could be designed in various ways to meet the Legislature’s policy objectives and priorities.