The 2022-23 budget provides $18.7 billion from the General Fund for judicial and criminal justice programs, including support for program operations and capital outlay projects, as shown in Figure 1. This is an increase of $852 million, or 5 percent, above the revised 2021-22 spending level.

The budget provides $5.5 billion for the judicial branch in 2022-23—an increase of $415 million (8 percent) from the revised 2021-22 level. This amount includes $3.5 billion from the General Fund and $499 million from the counties, with most of the remaining balance from fine, penalty, and court fee revenues. The General Fund amount is a net increase of $453 million (15 percent) from the revised 2021-22 amount. Funding for trial court operations is the single largest component of the judicial branch budget, accounting for about 70 percent of total spending. In addition to the amounts above, the budget also includes $220 million in new or reauthorized lease revenue bond authority.

Baseline Support for Trial Court Operations. The budget includes a $205 million General Fund augmentation in baseline support for trial court operations. This amount includes $100 million to increase funding equity between the trial courts. Specifically, these funds will be used to ensure that all trial courts have at least 84.5 percent of their workload budget needs met, as estimated by Judicial Council. The augmentation also includes $84.2 million to provide a 3.8 percent inflationary adjustment to address increased trial court operation costs. Finally, it includes $20.8 million for increased trial court health and retirement benefit costs. (We note the budget package also sets aside a similar amount to fund any further increases in the cost of these benefits that occur during 2022-23.)

New Judgeships. The budget includes $39.9 million General Fund in 2022-23 (decreasing to $39.1 million annually beginning in 2023-24) for 23 new trial court judgeships and associated staff. The judgeships will be allocated to individual trial courts based on workload need. (The budget package separately provides counties, who provide trial court security, $2.7 million General Fund in 2022-23—increasing to $3.2 million annually beginning in 2023-24—for security costs associated with these new judgeships.) As discussed in more detail below, the budget also includes funding to modify and build out courtrooms for these judgeships.

Excess Property Tax Offset. The budget includes a $128.4 million reduction in General Fund support for trial court operations in 2022-23 in order to reflect the availability of property tax revenue in accordance with Control Section 15.45 and Section 2578 of the Education Code. Such funds are remitted to the state by counties that collect more property tax than state law allows them to spend on education. This reduction is $12.9 million greater than the revised 2021-22 level.

Other Budget Adjustments. The budget also includes various other General Fund augmentations. Some of the major adjustments include the following:

Facilities. The budget provides a total of $111 million General Fund ($95.6 million one time) for various judicial branch facility modifications in 2022-23. This amount includes:

California Department of Corrections and Rehabilitation

The budget provides $14.4 billion (mostly from the General Fund) for the California Department of Corrections and Rehabilitation (CDCR). This is a net decrease of $22 million (less than one-half of 1 percent) from the revised 2021-22 level. This decrease primarily reflects reduced costs associated with responding to COVID-19. This reduced spending is partially offset by additional spending, including (1) one-time funding for capital outlay projects, (2) an ongoing augmentation to expand and modify substance use disorder treatment in state prisons, and (3) an ongoing augmentation to account for increased utilization of leave by correctional staff. (The net decrease in spending does not reflect growth in employee compensation costs in 2022-23 because such costs are accounted for elsewhere in the budget.) In addition to the amounts above, the budget package also reflects (1) $29.5 million in increased lease revenue bond authority for one existing project, and (2) $100 million in reduced lease revenue bond authority due to the cancellation of one previously authorized project. 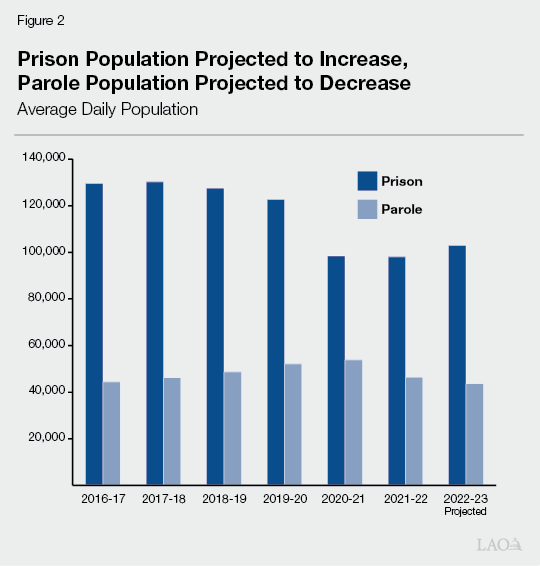 Health Care. The budget includes various augmentations related to correctional health care. Some of the major adjustments include the following:

Rehabilitation-Related Funding. The budget provides various General Fund augmentations related to rehabilitation. These include (1) $40 million annually for three years to expand capacity in residential facilities in the community that provide rehabilitative programming to eligible people nearing the end of their sentences or on parole; (2) $20 million one time to establish the Rehabilitative Investment Grants for Healing and Transformation program in order to expand capacity of community-based organizations that provide in-prison programming; (3) $10.6 million annually for three years to continue the Returning Home Well Program, which provides emergency transitional housing services to people on parole; and (4) $4 million annually in 2022-23 and in 2023-24 and $2 million in 2024-25 for community providers to deliver restorative justice programming in prisons.

Other Budget Adjustments. The budget also includes various other General Fund adjustments. Some of the major adjustments include:

The budget includes an additional $29.5 million in lease revenue bond authority to construct a 50-bed mental health crisis facility at the California Institution for Men in Chino. This brings the total lease revenue bond authority for the construction of the project to $120.6 million. In addition, the budget package reflects a $100 million reduction in lease revenue bond authority, which was previously intended to support the construction of a jail in Los Angeles County. (We note that the budget instead provides $100 million General Fund for Los Angeles County to support access to community-based treatment and housing for individuals found incompetent to stand trial for misdemeanor charges. For more information, please see our Health spending plan post.)

The budget provides $1.2 billion for the Department of Justice (DOJ) in 2022-23—an increase of $18.5 million (2 percent) from the revised 2021-22 level. This amount includes $439 million from the General Fund—a net increase of $23 million (6 percent). (The net increase does not reflect changes in employee compensation costs in 2022-23 because such costs are accounted for elsewhere in the budget.)

Bureau of Forensic Service (BFS). The budget includes $35.4 million one-time General Fund to backfill a decline in criminal fine and fee revenue used to support BFS. It also authorizes the Director of the Department of Finance to augment this backfill if additional monies are needed to maintain BFS operations.

Law Enforcement Activities. The budget includes $21.1 million General Fund in 2022-23 (decreasing to $13.8 million annually beginning in 2026-27) for various law enforcement-related activities. These include the following:

Firearms. The budget provides a total of $8 million in 2022-23 (decreasing to $1.5 million annually beginning in 2025-26)—mostly from the Dealers Record of Sale (DROS) Special Account—for the maintenance of firearm technology systems and the implementation of firearm-related legislation. This amount includes $5.2 million one-time DROS for the next phase of a technology project to modernize the state’s firearms systems.

Other Budget Adjustments. The budget includes various other General Fund adjustments. Some of the notable adjustments include:

The budget provides $1 billion for the Board of State and Community Corrections (BSCC) in 2022-23—an increase of $331 million (48 percent) from the revised 2021-22 level. This amount includes $782 million from the General Fund—a net increase of $371 million (90 percent). This increase is primarily due to limited-term funding provided in 2022-23 for various grant programs.

The budget package also requires BSCC to oversee $45.2 million in grant funds allocated through Control Section 19.56 for various purposes generally related to public safety. This includes $10 million for the Medication-Assisted Treatment (MAT) grant program, which supports MAT substance use treatment services at the county level. The remaining funds are allocated directly to individual local governments and community-based organizations for specific purposes, such as upgrading infrastructure. (For more information on Control Section 19.56, please see the “Targeted Legislative Augmentations” section of our Other Provisions spending plan post.)

Allocation of County Backfill Due to Repeal of Criminal Justice-Related Fees. The budget includes $50 million to provide counties with a backfill related to revenues lost from the elimination of 17 fees by Chapter 257 of 2021 (AB 177, Committee on Budget). These fees are generally related to diversion programs as well as to the collection of restitution or other criminal assessments. Funding will be allocated based on each county’s share of the state’s adult population, felony and misdemeanor arrests, and felony and misdemeanor filings. The budget package also requires annual reporting on how such funding was spent as well as one-time reporting on the revenue loss for each individual fee eliminated.

Victim Compensation Board. The budget package includes additional funding and changes related to victim services. For example, the budget provides $23 million one time from the General Fund to support existing Trauma Recovery Centers (TRCs) and to establish a pilot program to operate satellite TRCs in hard-to-reach and/or rural areas. In addition, the budget provides a $7 million augmentation in federal fund authority to reflect an increase in the amount of federal reimbursement the state receives for qualifying victim service expenditures. This funding will be used in various ways, including to increase victim compensation benefit limits for crime scene cleanup costs to $1,709 (from $1,000), funeral and burial costs to $12,818 (from $7,500), and relocation claims to $3,418 (from $2,000).

The budget package also includes additional funding and changes related to the board’s program to compensate people erroneously convicted of a crime. For example, the budget provides a $7 million ongoing General Fund augmentation for the program and statutory changes intended to expedite the award process.

Finally, the budget package includes language that would make various changes affecting the board beginning in 2024-25, contingent on sufficient General Fund resources to support the changes being provided in the 2024-25 budget. These include the following:

Commission on Peace Officer Standards and Training (POST). The budget provides $22.6 million from the General Fund in 2022‑23 (decreasing to $20.6 million in 2023‑24 and ongoing) to implement Chapter 409 of 2021 (SB 2, Bradford and Atkins). Senate Bill 2 creates a process by which peace officer certification can be suspended or revoked in instances of misconduct, including establishing a Peace Officer Standards Accountability Division within POST. In addition, the budget provides $5 million one time from the General Fund for POST to develop law enforcement wellness programs, training, and research.

OIG. The budget provides an $8.2 million augmentation in 2022-23 (increasing to $15.4 million in 2023-24 and ongoing) to allow OIG to monitor the revised CDCR process for handling staff misconduct allegations. The budget also provides $3.9 million ongoing for additional staff for OIG medical inspections.