Capital gains are one of the most volatile major elements of California's state General Fund revenues. These gains are generated from selling an asset (like stocks or a home) at a price greater than its original purchase price. California essentially taxes net capital gains (with some capital losses able to offset realized gains in a particular year) through its personal income tax. The state has recognized the significance of this capital gains revenue volatility through a constitutional amendment (Proposition 2) that sets aside some capital gains for reserves or accelerated debt payments in years when income taxes on these capital gains exceed 8% of General Fund revenues, as they have in recent years.

Capital Gains Volatility Over Time in California. The figure below illustrates the trend of California residents' taxable net capital gains (that is, the total amount of those gains reported on tax returns) from 1997 to 2014. Capital gains go way up when the stock market is strong (as it was around 2000, in the mid 2000s, and recently), and they dip when the stock market is weak (as it was after the "dot com" bust and in 2009). In 2014, the most recent year for which hard data is available from the Franchise Tax Board, residents' net taxable gains reached $115 billion. 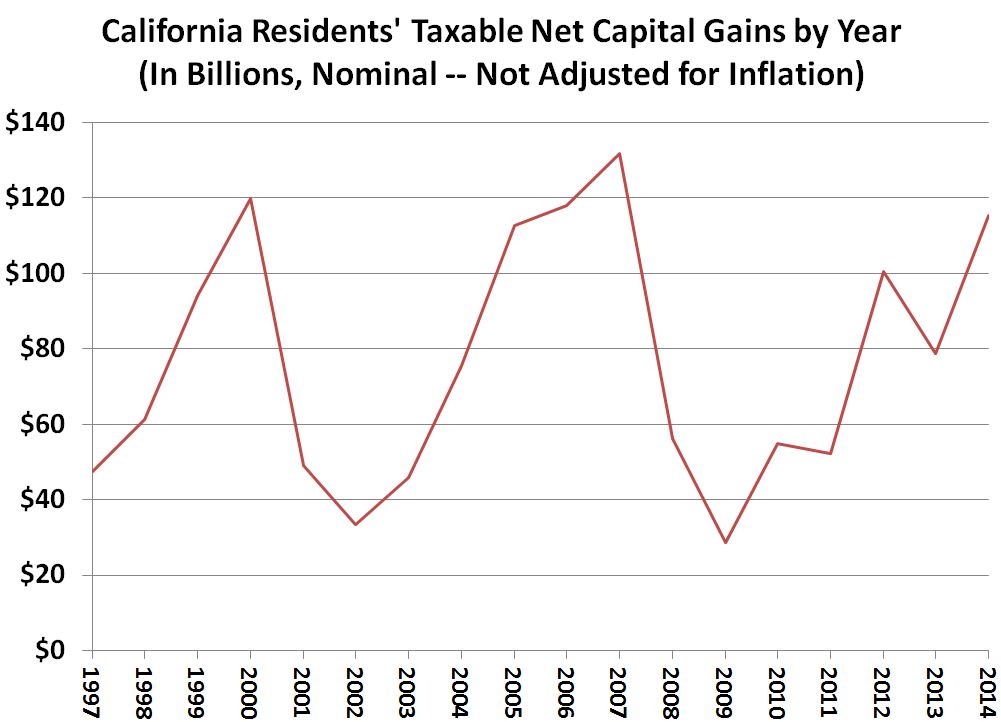 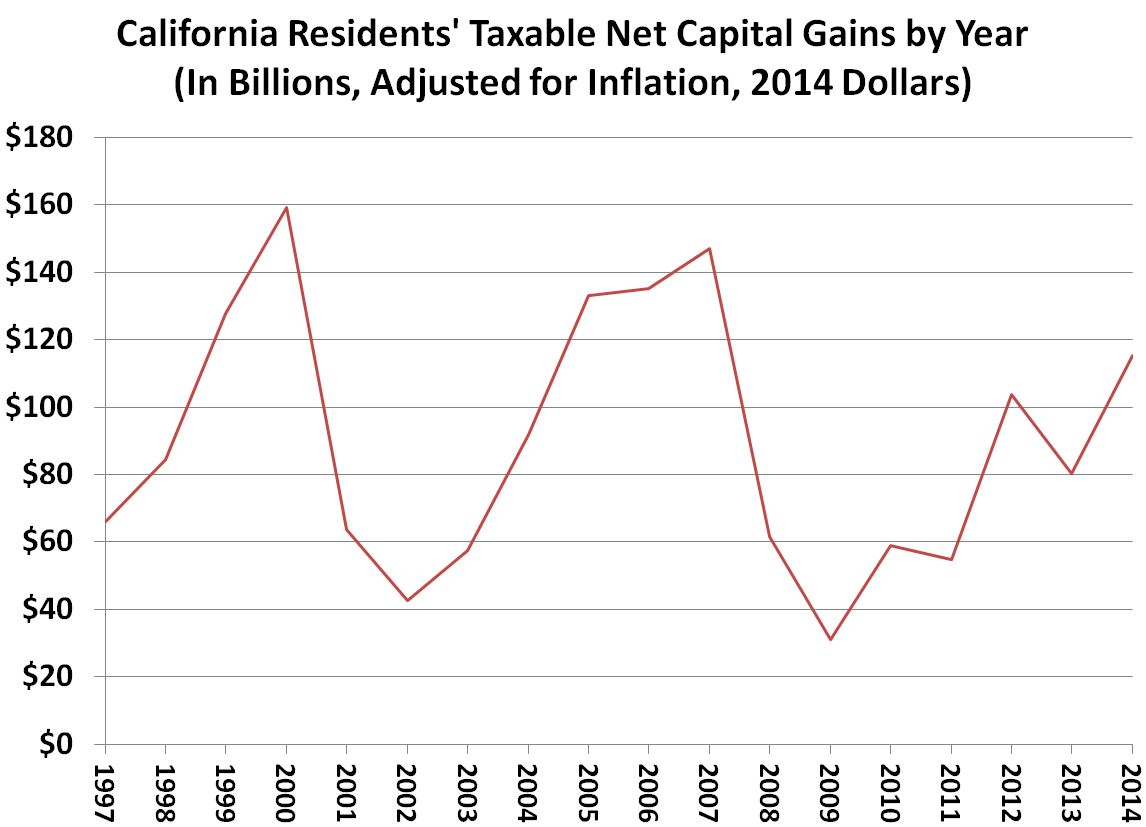 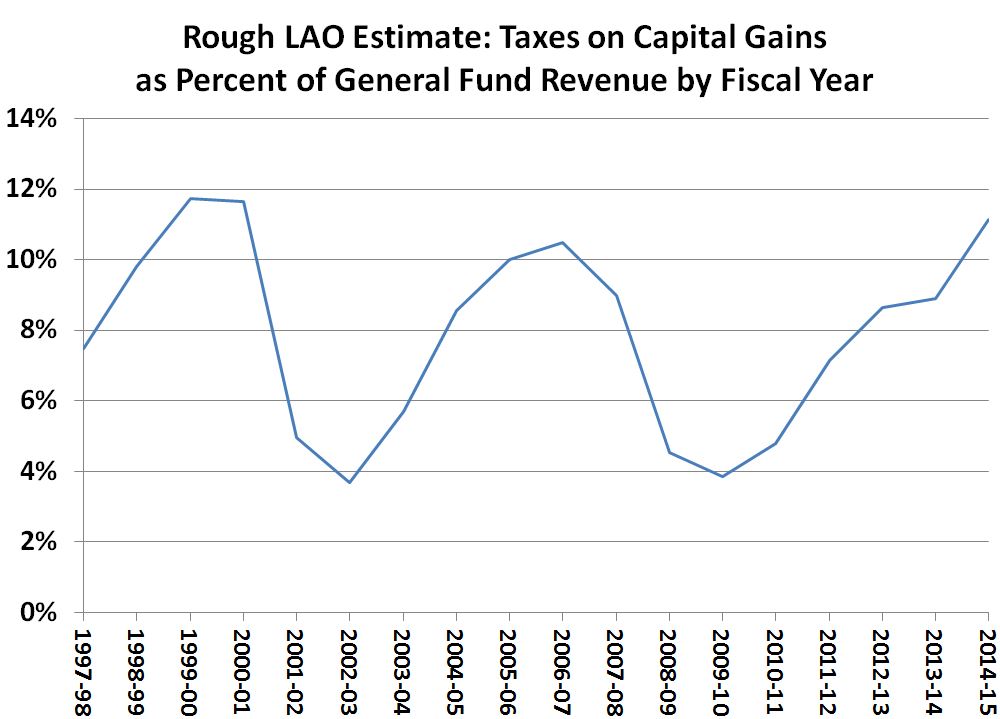 2016 May Revision Estimates and Assumptions

Assumptions About Stock Prices. Every California state budget must make assumptions, either explicitly or implicitly, about the future direction of the stock market in order to make an estimate of what personal income taxes will be in future years. In the case of our office, in recent years, our office has generally assumed slow, but steady, growth of stock prices over the next few years in our economic growth scenario. This is not a prediction that such growth will occur, as we note in describing our May Revision economic growth scenario. In fact, such slow, steady growth almost certainly will not occur. In reality, stock price trends are much more volatile from month to month and year to year, and this is the key reason why capital gains trends have been as volatile as shown above.

Our economic growth scenario summary table displayed our broad assumptions about S&P 500 (stock price) index trends through 2018. A separate table here also compared our S&P 500 assumptions with those in the administration's multiyear economic forecast. (In our tables, we display the average of the four quarterly average index levels for the S&P 500 for each calendar year.)

Translating Stock Price Assumptions Into Capital Gains Estimates. Statistical analysis shows that changes in stock prices explain about 55% of the annual change in California's resident capital gains. For this reason, once we have our economic scenario assumptions about stock prices, we use a statistical model to estimate what those assumed stock market changes would mean for capital gains in California over the next few years. Below, we display our multiyear estimates of resident taxable capital gains, as well as the administration's over the next few years beginning with 2015. 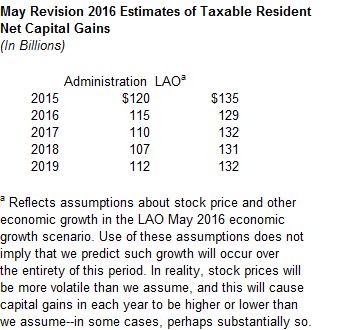