Sales Tax Exemption for Manufacturing and R&D Equipment: An Update

Since 2014, California has exempted certain sales of manufacturing or research and development (R&D) equipment from part of the sales and use tax. In a 2015 blog post, we provided some background on this exemption and noted that the resulting revenue reductions were much smaller than the administration had projected originally.

Annual Report on Use of Exemption. State law requires the State Board of Equalization (BOE)—the agency that administers the tax exemption—to submit an annual report to the Legislature on use of the exemption. On March 1, 2017, BOE reported that taxpayers claimed an estimated $165 million in 2016—a 6% increase from 2015.

…But Still Far Lower Than Original Projections. The current estimates for 2016 are about one-third as large as the administration projected three years ago, when the Legislature passed the law that created the exemption. 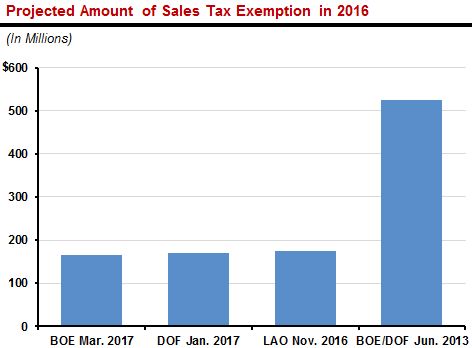