In November 2016, California voters approved Proposition 56—a tax increase on cigarettes and other tobacco products. As a result, the state’s excise tax rate on cigarettes increased from $0.87 per pack to $2.87 per pack on April 1, 2017. Cigarette distributors must pay this tax when they sell cigarettes to retailers and wholesalers. 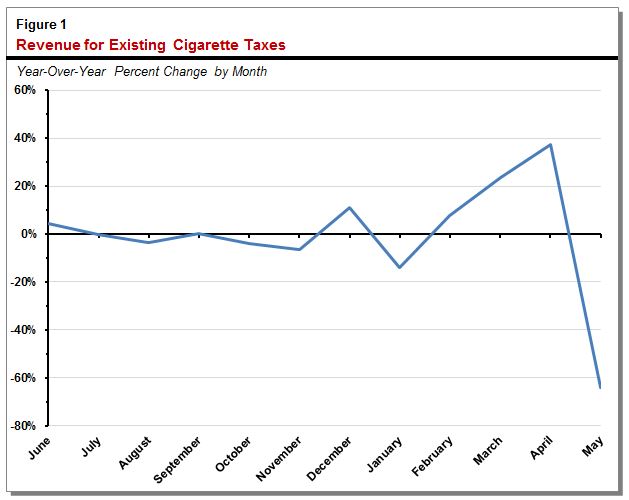 Big Changes Starting in March. As shown in the figure, revenues for the existing cigarette tax funds in March and April 2017 were 24 percent and 37 percent higher than revenues in March and April 2016, respectively. One likely explanation for this revenue spike is consumer stockpiling of cigarettes in anticipation of the April 1 tax increase. Direct evidence of consumer stockpiling can be hard to find, as it requires more detailed data on retail sales of cigarettes. (A study using such data found some evidence of stockpiling in response to cigarette tax increases in Illinois in the 1990s.)

Big Drop in May: How Much Was Temporary? As shown in the figure, revenues for the existing cigarette tax funds were 64 percent lower in May 2017 than in May 2016. This sharp decline could reflect a combination of various responses to the tax increase, including temporary responses (such as stockpiling) and permanent responses (such as lower smoking rates). For our office’s analysis in last year’s statewide Voter Information Guide, we assumed that the measure would reduce purchases of taxed cigarettes by roughly 20 to 30 percent in 2017-18.

Ongoing Effect Will Become Clearer Over Time. At this point, we do not know how much of the May decline was temporary and how much will be permanent. Revenue data in the coming months will help us gauge whether our 2017-18 estimate was too large, too small, or close to correct.