Higher Revenues Across 2017-18 and 2018-19. Figure 1 compares our November 2018 revenue estimates with the administration’s revenue estimates that were incorporated into the June 2018 budget package. As shown below, our estimates of revenues are $5.3 billion higher than budget assumptions across the two years. Our largest difference is in personal income tax (PIT) revenues, which are $4.8 billion higher over the period. This reflects our higher wage growth and capital gains assumptions.

PIT Growth Remains Steady. Revenues from California’s three largest taxes—the personal income tax (PIT), sales tax, and corporation tax (CT)—have increased 41 percent from 2012-13 to 2017-18. PIT revenues have increased 46 percent over that same period. Strong PIT growth is due to higher than average wage growth, especially for high-income earners, and the growth in the stock market. California wage growth from 2012 to 2017 averaged 4 percent adjusted for inflation, compared to an average of 2.6 percent from 1993 to 2012. The higher tax rates levied on high-income earners by Propositions 30 and 55 (2012 and 2016) further buoyed state revenue from this earnings growth.

Expect Revenue Growth to Continue in 2019-20. Figure 2 shows our estimates for 2019-20. Consistent with our economic assumptions, General Fund revenues increase by 5.5 percent from 2018-19 to 2019-20. Much of this growth is from the PIT and lower transfers. Continued tightening in the labor market should keep upward pressure on wages and salaries, which make up about two-thirds of taxable income. We expect taxable wages and salaries to increase by 7.2 percent in 2019, but slowing to 4.4 percent in 2020 in part due to slower growth at the national level. While we project continued growth in capital gains revenues in 2018-19, we expect revenues from this source to decline somewhat in 2019-20 due to slow growth in the stock market. 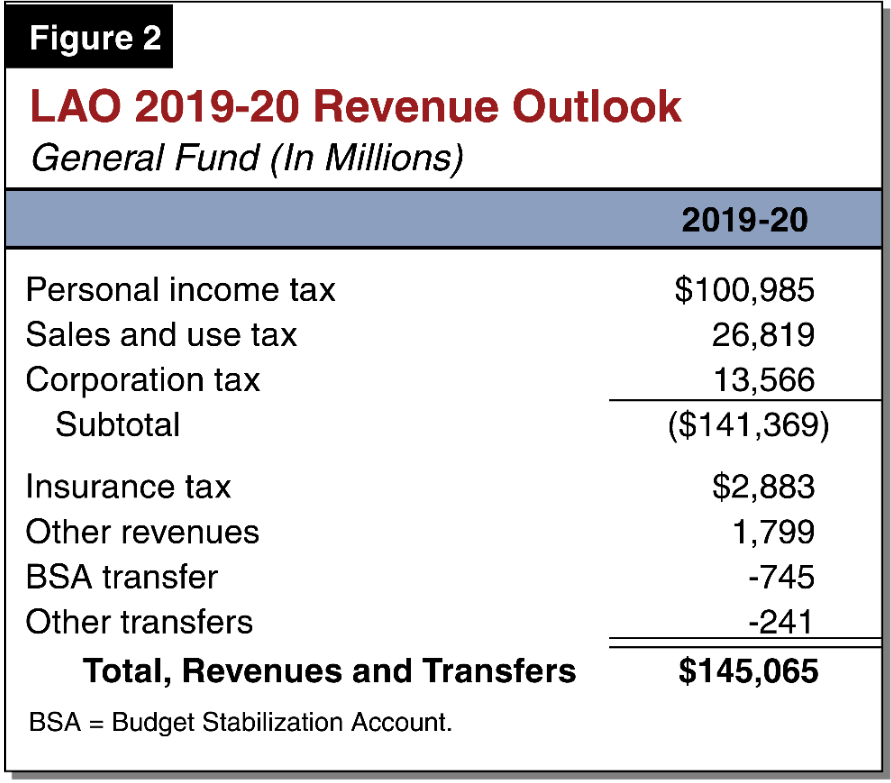 Steady Growth in CT Revenue. We estimate that CT revenue will continue to grow at a steady pace over the budget window. This is based primarily on our assumption that corporate earnings continue to grow. Under the consensus forecast, there is broad growth in output and corporate earnings across all sectors of the economy. In addition, some large multinational corporations are expected to “repatriate” large amounts of earnings from their overseas subsidiaries over the next several years because of recent changes in federal tax laws. While this will increase the size of the CT base, much of the increased CT liability will be offset by other tax provisions, such as research credits. 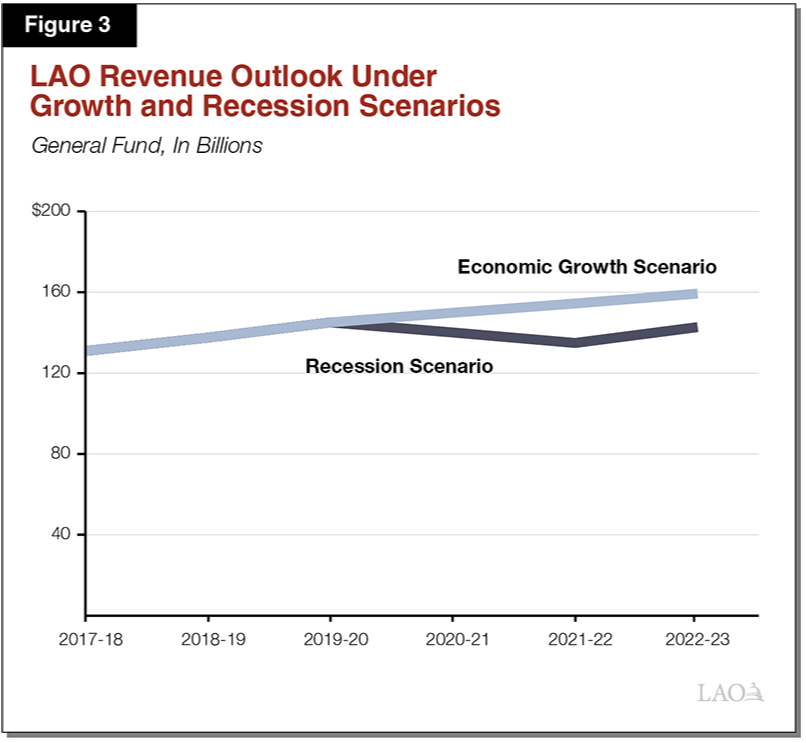 Our recession scenario is based on Moody’s Analytics “moderate” recession scenario. Under this scenario, GDP drops by 2.25 percent over four quarters, starting in 2020-21. This scenario also assumes the S&P 500 declines by one-third over the course of the recession. Under this scenario, revenues would decline by close to $5 billion in both 2020-21 and 2021-22 respectively. (Compared to the economic growth scenario, the total revenue loss would be roughly $46 billion over the outlook period.) We assume the economy starts to recover in the beginning of 2021-22, with revenues increasing to $142.7 billion by 2022-23.