The single largest source of General Fund revenue is the personal income tax (PIT). In order to estimate PIT revenue for our Fiscal Outlook publication, we must also make a projection of wage and salary income. This post discusses our method for making these estimates and some results of those estimates under our economic growth scenario.

Wage and Salary Income Largest Share of Personal Income. Most workers earning income in California pay state taxes on their wages and salaries. As Figure 1 shows, wages and salaries make up the largest component of the personal income. (Another major source of PIT revenues are capital gains, which we discuss in this post.) 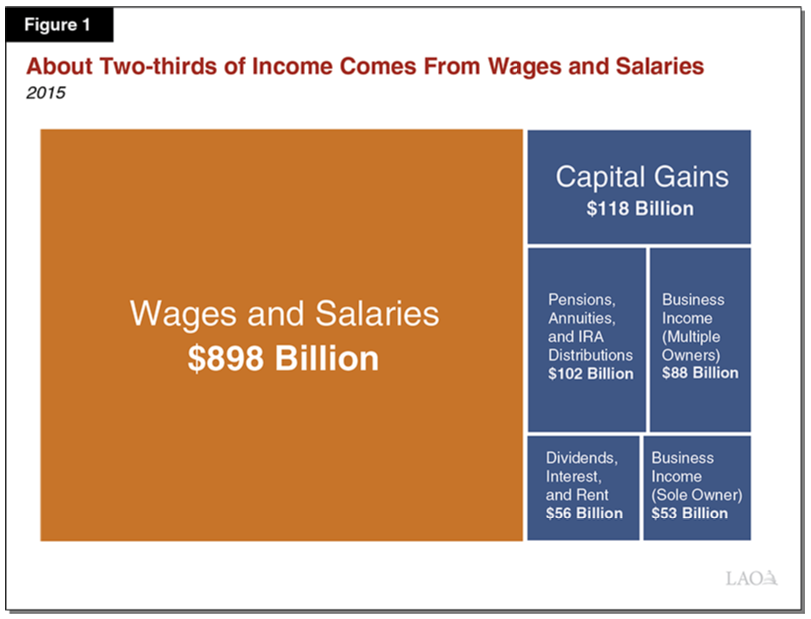 Our Office Forecasts Wage and Salary Income by Industry. We project wage and salary income in over a dozen different “industry sectors.” Industry sectors consist of groups of businesses that are engaged in similar activities or are producing the same goods or services. For example, the retail trade sector includes stores that sell goods directly to customers. This includes gasoline stations, pharmacies, and grocery stores, among many others. As such, workers within an industry sector include many different job types. For example, the retail trade sector employs cashiers and salespeople, but also managers, accountants, and pharmacists. For each industry sector we project:

Once we have constructed these projections for each of our industries, we multiply the number of jobs by average wages to get wage and salary income for that industry. Then, we add up all the industries, which yields our estimate of total wages and salaries for the state.

More Wage and Salary Income Growth Expected to Come from Wages, Rather Than Jobs. Figure 2 shows our projections of average annual growth in total wages and salaries, by industry sector, over our outlook period. We project total wage and salary growth will be highest (around 7 percent per year) for workers employed in the technology sector and lowest for workers in print media and telecommunications. The figure also shows what share of total growth in wages and salaries is expected to come from increases in average wages versus increases in the number of jobs. For most industry sectors, it is the latter—overall wage and salary growth is expected to result mostly from average wages, rather than jobs. This means that—mostly—existing workers’ wages are rising rather than additional people gaining employment. As California’s economy nears full employment, we expect job growth to slow and wage growth to remain steady. 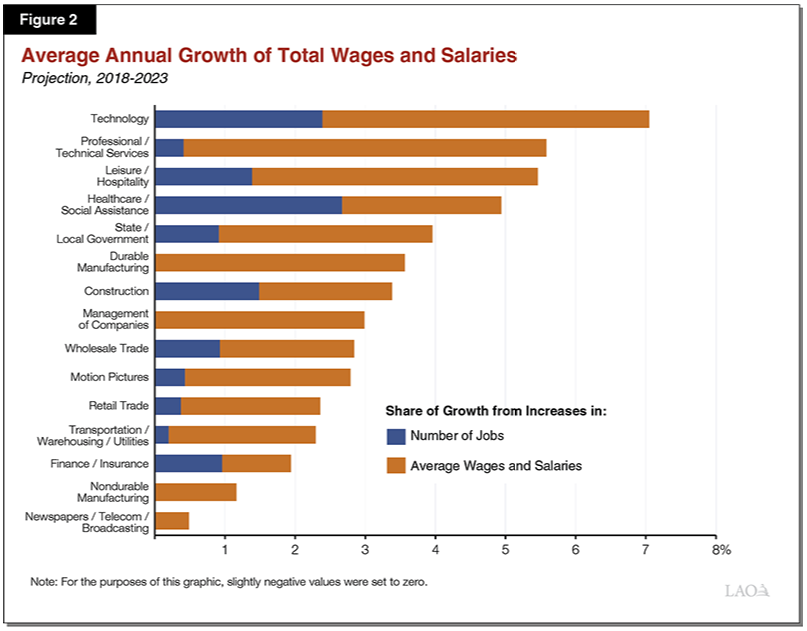 Additional Notes. Some additional notes about our outlook for wages and salaries: